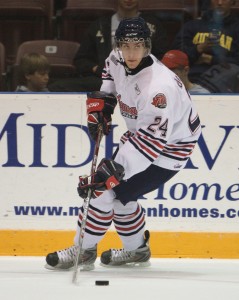 One-Timer: The dynamic puck-moving d-man actually increased his production after the trade of Tavares, scoring 17 points in his final 13 games. As a OHL rookie, he finished with an impressive 63 points in 68 games. He was awarded OHL Rookie Of The YearHe actually out-dueled Matt Duchene to win the puck-control relay at the Top Prospects Skill Competition. He does need to fill out physically and although adequate in his own zone, he could improve his defensive play, although he is very poised with the puck. Given his high-end offensive arsenal of passing, stick-handling and shooting skills, de Haan could definitely here his name called even early on draft day.