The Detroit Red Wings are a franchise known for their drafting prowess, thanks largely to the work of General Manager Ken Holland and his elite scouting staff. Their player picking skills have brought Detroit some of its biggest pieces-Pavel Datsyuk, Henrik Zetterberg, Johan Franzen, Niklas Kronwall, Jimmy Howard, and Valtteri Filppula, all crucial parts of the Red Wings franchise, were found and secured via meticulous scouting and research. In more recent years we’ve seen other Red Wings’ draftees rise in ranks, Darren Helm, Justin Abdelkader, and Jakub Kindl all find themselves regulars in the ‘Wings lineup today after their selections in the 2005 entry draft. It is then clearly no secret that the organization knows what it’s doing come draft day every year, and what follows is a list of some of the most promising selections from those events. The future of the Red Wings truly does look bright.

At 18 years old, the Slovakian forward is known best for his stick-handling skills and Datsyuk-like shootout magic. With a QMJHL rookie of the year nomination and a Memorial Cup Championship under his belt, it was an easy decision to select the young scorer who had 107 points in 124 games during his first 2 seasons with the Sea Dogs. This year Jurco is putting those numbers to shame, averaging 1.44 points per game with 19 goals and 20 assists in 39 appearances this season. Jurco models his game after that of countrymen Marian Hossa and you can see it in the way he plays. With a little work on the defensive side of the puck, Jurco could be the next big thing in Hockeytown in just a few years time. 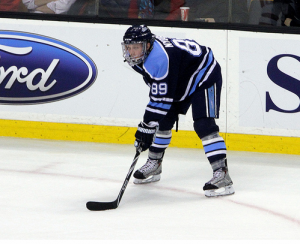 In 3 years with the University of Maine, Nyquist easily exceeded a point per game pace with 144 in 113 games. Now in his first full year with the Red Wings AHL affiliate Grand Rapids Griffins, Nyquist leads the team in scoring with 24 points in 22 games. The general consensus in Detroit is that the Red Wings have found themselves another late round gem in Nyquist, and I wholeheartedly agree. To read more about my thoughts on the 22 year-old Swede, click here.

After a mediocre first season adapting to North American hockey, Tatar put up a respectable 57 points in his 2nd campaign. He even earned a 9 game stint with the Red Wings last season after a rash of injuries broke out. The small Slovakian forward still has some things to work on as he continues adapting to a more physical game, but his quick skating and intelligent play making make him an interesting player to watch and one that could blossom into a bona-fide NHL talent. With 16 points through 22 games, Tatar is on pace for a similar year to the one previous and find himself on the short list of potential call-ups if the ‘Wings should need him.

Sheahan’s current 17 points in 16 games for the Fighting Irish has him well above the point production pace he set in his first 2 seasons. At 19, Sheahan is a Junior in college, making his current point totals even more impressive. He’s a big player who knows how to use his size to make a play, and while he quite often does take on the role of a playmaker, Sheahan does possess the ability to finish. His numbers may not awe you at this point in his career, but with noticeable signs of improvement from such a young player, his future is bright. He was a high draft pick for a good reason, he has an immense amount of potential. 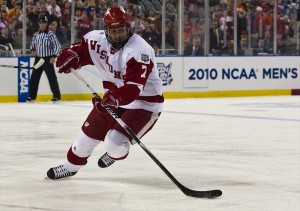 Many Red Wings fans already know Brendan Smith’s name after his short stint playing with the team where he impressed many. Or perhaps they remember him from his preseason hit that resulted in one of the lengthiest suspensions this year, but either way, you likely know his name. Now back with the Griffins, Smith is not only solid defensively, but has a knack for putting points on the board, as evidenced by his current 10 points in 16 games. This production is nothing new to Smith either, as he logged 52 points in 42 games during his final year with the University of Wisconsin badgers. Smith’s calm and collected demeanor coupled with brilliant confidence in his wise on-ice decisions make him a shoe-in for the next Red Wings’ defenseman to become a household name. For a more in-depth look at Smith, head here.