Statistics can be taken out of context, or used to prove points that are not relevant to the statistics themselves.  Some statistics can be close to  irrelevant, plus/minus and shots on goal eventually may be phased out by better statistics like Corsi ratings and scoring chances.  Some statistics however can help pinpoint a team’s issues and help confirm what you see on the ice.  In this disappointing season the Blue Jackets have at times looked like they truly are the worst team in the NHL, at others like injuries and an early-season suspension really did prevent the team from playing to their potential.  In this case the statistics tell a deeper story, and the story is not a good one.

The Blue Jackets are on pace to block 947 shots,  the lowest total in team history.  Blocked shots are a sign of grit, tenacity, and the willingness of a player to give up his body to make a play.  The Blue Jackets have not been a good shot-blocking team, placing in the bottom ten of the league every season since the lockout.  The team leader is Montreal with 815, almost 250 more than the Jackets.  The individual league leader is Montreal’s Josh Gorges with 134, the Blue Jackets leader is Nikita Nikitin with 67, good for 78th in the league.  Last year Jan Hejda led the Blue Jackets and ranked 16th in the league with 158 blocked shots.  Hejda was supposed to be replaced with Radek Martinek who blocked 128 shots in only 64 games played last season, and James Winsiewski who blocked 119 shots in 75 games.  Unfortunately Martinek was lost for the season with a concussion after only seven games and Wisniewski has missed the majority of the season via suspension and a broken ankle.  Blocked shots do not necessarily lead to wins, some of the teams in the bottom of the league in blocked shots are successful teams like Vancouver and Chicago.  Those teams thrive on puck possession, something the Blue Jackets do not do well.  Factor in the extremely poor goaltending of Steve Mason (26 GS, 3.43 GAA, .882 Sv %) and the problem becomes clearer.  More blocked shots means fewer shots on net against a goaltender at the bottom of the league in almost every statistic.  With simply average goaltending from Curtis Sanford the Blue Jackets are a much more respectable 8-11-4 (21 points in 23 games, on pace for 75 points over 82 games).  Add in some blocked shots from two defensemen the Blue Jackets haven’t had the majority of the season and perhaps the record is even better. 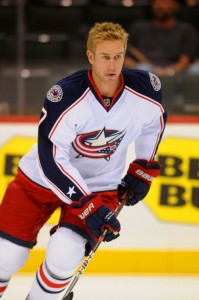 There is one player in the league with fewer hits than Carter that has played in at least the same number of games.  Pierre-Marc Bouchard of the Minnesota Wild has three in 37 games.  Jackets prospect Cam Atkinson, listed at 5′ 7″ 172 lbs. has six hits in five games.  Carter’s four hits in 30 games averages out to .13 hits per game.  Despite having the size (6’4″ 200lbs.) physicality has never been a big part of Carter’s game, so a low number isn’t exactly unexpected.  Carter’s career average hits-per-game however is .72, a far cry from .13.  His career average would put him at 21 hits, more than five times his current total.  Nobody expects Carter to go out and hit like Derek Dorsett (123 hits) or Jared Boll (63 hits), and there are plenty of players that are successful without being physical, like Jaromir Jagr (5 hits) and Patrick Kane (9 hits).  The problem is that Carter is well below his average amid talks of him being unhappy in Columbus.  Carter has not publicly admitted his discontent, however he is rumored to be on the trading block and appeared to play with little passion when he was healthy.  After watching Carter score a hat trick and ring another puck off the goalpost Nashville Predators head coach Barry Trotz had this to say: “After that play, I didn’t think he had much going on. He got his three goals and that was enough.”  It remains to be seen if the Blue Jackets are actually interested in trading Carter or if there would be any interest in his extremely long, though cap-friendly contract.  If Scott Howson does decide to move him, it’s doubtful the return will be close to what was given up to attain Carter.  For a team that has had a tough time attracting marquee free agents this is not the ideal move.  Howson should stick with Carter, and see what head coach Todd Richards can get out of him.

Brassard is the 157th ranked center in the league in faceoff winning percentage .  This is a regression from last season’s 46.6% which was a vast improvement over the 41.8% of the season before.  This makes it difficult to have Brassard take a high percentage of the team’s faceoffs, which is unfortunate when he is centering the team’s top line, as he is right now.  Every other regular center on the team is well over 50% including the 11th ranked center in the NHL Antoine Vermette (57.5%).  Unfortunately Vermette is in over his head playing on a number one line as he lacks the consistency and offensive skills to play at that level.  Brassard certainly has the offensive skills but lacks the strength and faceoff skills.  There are elite centers who lack in the faceoff circle, but make up for it with their overall skills.  Evgeni Malkin (44.9%) and Mike Ribeiro (42.6%) are two centers that play at an elite level despite poor faceoff skills.  If Brassard could elevate his game to the point that his faceoff skills aren’t a major issue it would be possible to put him with Rick Nash and see if he can be the playmaker Nash needs.  Although he was buried on the fourth line by former head coach Scott Arniel, Brassard’s current output of  7-9-16 in 41 games will not cut it.

One of the major complaints about general manager Scott Howson’s tenure has been his tendency to give unwarranted contract extensions to young players.  Perhaps none of these extensions is more crippling right now than the inexplicable two-year $2.9 million extension given to goaltender Steve Mason.  Viewed as a gamble at the time, it’s now an albatross of a contract.  Mason, who is only 23, was never properly developed and groomed for the role he was thrust into.  Due to a rash of injuries Mason essentially made the jump from Canadian juniors to the NHL with only three AHL games in-between.  Mason is still young, and if the team has any hope of developing him any further they really should consider waiving him and sending him down to Springfield.  The problem, of course is that injuries have kept the Jackets from having two healthy, competent goaltenders to keep at the NHL level.  Mark Dekanich who was signed in the offseason to push and compete with Mason has been cursed with numerous injuries and has been unable to play more than a handful of games.  At the All-star break Mason has the worst save percentage in the NHL and the second-worst goals-against-average.  Also woeful is Mason’s .789 save percentage while the team is shorthanded, also second-worst in the league.  If this team is to improve next season they must improve their goaltending.