The waiting is over, the players are ready. The Winnipeg Jets identity has taken shape and the Thrashers are no more. On the eve of the city’s first game back in the NHL since 1996, the anticipation in Winnipeg has reached epic proportions. With a mix of experienced players and young rookies with depth players in-between, the Jets final roster looks worthy of an NHL franchise that can compete with the big boys. A Stanley Cup in the first few seasons is unlikely but a playoff spot not such a far stretch.

After some last-minute changes with Patrice Cormier sent down the AHL and Brett Maclean signed off waivers from Phoenix, we present the 2011/2012 Winnipeg Jets 23 man roster: 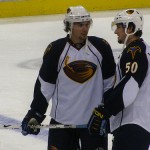 With Byfuglien and Enstrom as the most probable first pairing, all eyes will be on Zach Bogosian, who kept fans waiting until Sep 14 before finally signing his new 2 year, $5 million deal. The young defenseman is seen by fans in Winnipeg a future leader of the Jets defense and the 21-year-old will be playing his 200th NHL game against the Canadiens on Sunday.

Evander Kane, the 4th overall pick for the Atlanta Thrashers in 2009, will be heavily relied upon for second line scoring for the Jets this season. His speed and goal scoring ability have led the young forward to 26 points in his first NHL season and 43 in his second. Jets fans can expect that trend to continue with Kane looking for 50+ points this season in his new colors as well as his first 20+ goal season.

Mark Scheifele survived the cut all the way from rookie camp through pre-season and will be expected to center either the second or third line for the Jets. The 18-year-old Kitchener, Ontario native was the Jets 7th overall pick and looks have settled in well with the Winnipeg team after an impressive 75 point season for the Barrie Colts in 2010/11. Scheifele signed a 3 year entry-level deal in early October and ‘stunned’ was coach Claude Noel’s reaction when asked how he would feel if Scheifele was to return to junior hockey. 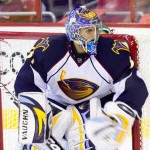 Ondrej Pavelec is expected to start against Montreal, with Chris Mason serving as a mentor to the young goaltender. Pavelec’s stats have improved consistently from year to year and he is expected to sign a new deal keeping him in Winnipeg long-term before becoming an RFA at the end of 2011/12.

The other notable new signing is mascot Mick E. Moose, the former Manitoba Moose mascot has been signed off free agency from the AHL and will be expected to be present in the first game back at the MTS centre on Sunday. 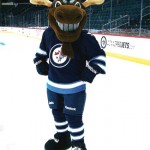