Dwight Howard; Rick Nash you are not.

Ever since his Orlando Magic were eliminated in the first-round of the NBA playoffs last year, the superstar power forward has been more or less demanding to be traded. Despite being just two years removed from a trip to the NBA Finals, Howard continues to voice his desire of being traded to a championship contender like the Los Angeles Lakers, or the latest rumour which has him expressing interest in the Chicago Bulls.

Why am I talking about an NBA star on a hockey website you ask? Well, I am using Dwight Howard as an example of the exact opposite way in which Rick Nash of the Columbus Blue Jackets has handled a similar yet completely different situation. The two athletes are similar only by the fact that they are both involved in trade talks, but that is where the similarities end.

The first-overall pick in 2002, Nash is now in his ninth season with the Blue Jackets and in the prior eight seasons he has tasted (moderate) success just once: in 2008-2009, the Jackets made the playoffs for the first and only time in franchise history. In comparison, Howard, the first-overall pick in the 2004 NBA Draft, has seen the playoffs in five of his seven seasons and has taken his team to the NBA Finals and Conference Finals on seperate occasions.

By looking at the success of Orlando and the lack of success by Columbus, you would think that it would be Nash who would constantly be throwing himself into trade talks and doing everything in his power to leave what appears to be a hopeless situation; but it is the opposite. 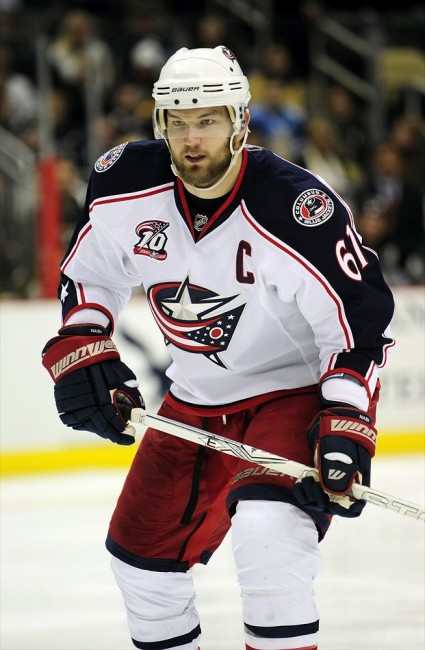 Most people in hockey circles actually feel that Nash would be completely just in demanding a trade as the Blue Jackets have proven to be completely inept when it comes to winning and do not hold much hope in doing so in the near future.

He may have in fact requested a trade, but if he did, he certainly did it in a much quieter and more resepctful manner, as opposed to the look-at-me, spoiled superstar approach that Howard and many others have chosen.

And that is where the admiration of Rick Nash comes in.

In an era of the spoiled athlete mentioned above, Nash has been nothing but a class act, humble, down to earth, team-first guy throughout his career.

With the talent and ability to match any NHL star, Nash has played his eight and a half seasons with little talent around him. Had he been with a better team during what would be the prime of his career, who knows what kind of individual and team accolades he would have achieved, but unlike Dwight Howard, Nash has never looked at it that way. Instead of craving those individual awards and desiring to play for a ‘fabricated’ championship team, Nash has spent his career giving all he absolutely could to a franchise that offered little in return in the way of individual and team success.

There is nothing wrong with someone like Howard wanting desperately to win a championship, but he already plays for a playoff team. It would be much more commendable if he stuck with his current team and took them to greater heights rather than going to an already elite team and simply being the final piece of the puzzle.

Wanting to win and being out-spoken about it doesn’t make Howard a bad person but it does in turn show the character that someone like Rick Nash possesses. Instead of holding himself to a higher standard and being a huge distraction to his team, Nash has kept his trade desire (if any) under raps. Even when everyone else around him knows that he has earned the right to request a trade, Nash still puts the team first and does his talking with management behind closed doors.

That would be the definition of ‘character.’

Dwight Howard wants to be traded because his team doesn’t advance to the NBA Finals every year. Rick Nash hasn’t said boo despite playing for a team that has a grand total of four playoff games in nine years.

Think about that for a second.