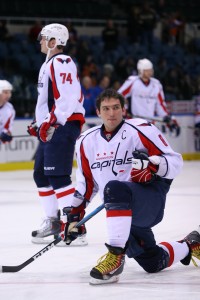 When Alex Ovechkin entered the NHL post-lockout for the 2005-06 season – after being the number one overall pick in the 2004 NHL Entry Draft – his impact was immediately felt league-wide, scoring 106 points (52 goals, 54 assists) and winning the Calder Memorial Trophy – a distinction for the best rookie that season – as a 20-year old. After turning plenty of heads during his magnificent rookie campaign, the sky was the limit for Ovechkin.

His personal best of 65 goals and 112 points came during the 2007-08 season, en route to his most impressive season-to-date, notching not only the Art Ross (top point scorer) and Maurice Richard (top goal scorer) trophies but the Hart Trophy as league MVP. It seemed nothing could stop Alex Ovechkin from becoming the premiere goal-scorer of this generation: nothing except Bruce Boudreau.

Midway during Ovechkin’s stellar 07-08 season, the Washington Capitals – struggling at 6-14-1 – made a coaching change, ousting Glen Hanlon and summoning Bruce Boudreau from their AHL affiliate Hershey Bears (a team Boudreau won the 2006 Calder Cup with). It was the right move as the Capitals ended the season with their first division crown and playoff appearance in several years. Over the course of the next three seasons, the Capitals would emerge as an Eastern Conference powerhouse and a team most feared to play against with Ovechkin and fellow offensive superstars Alex Semin and Nicklas Backstrom leading the way.

Last season would be the first in Ovechkin’s career where he did not crack 90 points or the 40-goal mark, finishing at 32 goals and 53 assists. For most players, an 85-point campaign would be a signature highlight in a remarkable season. For Ovechkin, a major disappointment from one of the elite superstars in the NHL: an even bigger disappointment than the season prior when the Capitals won the President’s Trophy (most points earned in the NHL) and lost to the eighth seeded Montreal Canadiens in the first round of the playoffs.

The nation witnessed Ovechkin and the Capitals first-hand in the inaugural season of HBO’s 24/7 Road to the NHL Winter Classic last year on the path to their date with the Pittsburgh Penguins on New Year’s Day. Viewers saw the Capitals in the midst of a losing streak, with players frustrated at their misfortunes and a head coach who preferred the salty language rather than inspirational words. The key point taken away from the series was Boudreau’s change in philosophy, claiming the team needed to completely focus on defense if they wanted to go deep in the playoffs and urged a team-wide commitment to playing a two-way game. A concept not easily accepted by offensive superstars and marked, to this outsider, the beginning of the end for Bruce Boudreau.

With a new system in place, the Capitals would advance past the first round of the playoffs against the New York Rangers but would be swept 4-0 in the Semifinals against the Tampa Bay Lightning, prompting more concern towards a team that should have gone farther than it did. The discontent from the playoffs carried over to the beginning of this season with the Capitals losing nine of thirteen games in November and posting a 12-9-1 record before pulling the plug on Boudreau, replacing him with former Capital Dale Hunter.

The biggest mistake a head coach can make is trying to turn his players into something they simply aren’t. No one can fault Bruce Boudreau for wanting his team to commit to playing both ends of the rink at 100% effort. However, there’s a fine line to toe. Taking your bread-and-butter superstar and effectively neutering his offensive abilities is something even a casual NHL fan would be against. Cursing more than inspiring your players never helps, too. It’s easy to see why Ovechkin and the Capitals tuned out Boudreau’s message after a while.

When Alex Ovechkin is on his game, he’s similar to a bull; his legs are always churning, he’s hitting everything in his path, and, combined with a deadly shot, is near impossible to stop. Observing his game from last season till now, all those elements appear absent. He almost seems disinterested in what is going on in front of him. Flashes have emerged since Dale Hunter took over, but Ovechkin has yet to put together a complete effort as in prior seasons. And it won’t occur until the passion Ovechkin had for the game returns. Can Hunter find a way to reignite that passion? Only time will tell.