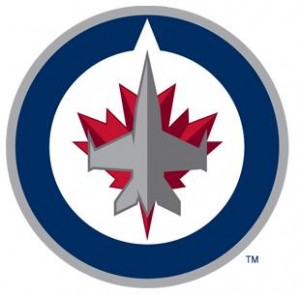 After Sunday is over, the people of Winnipeg are going to have a few days to relax.  Their team doesn’t play again until Thursday, and after that night and a game on Saturday, both away, they return to take on the Penguins on the 17th, a Monday.

By then, everyone will be back on their feet, ready to settle into the long season ahead, one which may or may not bring its share of happiness on the ice to go along with the general jubilation on the street that finally, after the long pause, the town is in the NHL once more.

The Winnipeg Free Press, one of the town’s dailies, has this on its cover for Saturday:  “Party Like It’s 1979,” over top of a picture of a perhaps long-forgotten Jet, Peter Sullivan, snapped during the first game of the team’s first NHL go, which saw them debut on October 14th, 1979.  They were fresh from the demise of the WHA, you’ll likely recall, where they had been kicking butt since 1972.

Inside the paper, section three, “City & Business,” naturally also focuses on the team, with a story on former NHLer Jim Neilson.  Sports, well, that, to your surprise but not that of anyone living here, has a headline about the CFL’s Blue Bombers, and not a word about the Jets until page two.  And then more on three, four, five, and nine.  In fact, hockey takes up most or all of all those pages.  The team is also talked about in a story in the FYI (“Feed Your Intelligence”) section.

So that’s a big chunk of what looks to me like a pretty hefty Saturday paper, done in the kind of quality that big-city papers have.  The reason for that—this is a big city.  Not huge.  Not LA-sized, or Chicago.  In fact, not a million strong.  But it’s a city with lots of tall buildings mixed with smaller structures in a variety of styles downtown.  It’s a city with a river wandering in a lazy “S” curve through it, a good university, museums, an enormous provincial capital building with an imposing statue of Queen Victoria outside.  It’s also got war memorials (WW1, to start with, most added to later to commemorate others lost since), sculpture and public art, and a Hudson’s Bay Company store that looks like it just jumped out of 1923.

All of that, and a first-class arena, which more than 15,000 will jam Sunday afternoon, while others take to an area known as The Forks to watch the game on TV screens.  Still others will find their way to the Winnipeg Convention Centre for a viewing party and later concert.

Portage and Main, the epic crossroads where Bobby Hull and family were introduced in 1972 to a waiting city, will once again be the epicenter of this world as people mill around waiting for the game to begin.  Some, perhaps, will be thinking of Hull, of the bright hope of the WHA putting the NHL out to pasture by luring its stars away.  It was a dream that lasted until 1979, when the older league absorbed the Jets and a handful other other teams.

In Winnipeg’s case, it was only to be spit out, to Phoenix, a decade and a half later.  But none of that matters now, nor does the question of whether the new team, Atlanta just a couple of months ago, can lay claim to the old Jets history.

“The Jets never left; the history was always there, in a way,” one season ticket holder says, “kind of floating.  Now, the team has come back, so it comes back to us. This is the Jets.”

Until Sunday, it’s just a hope.  But at 4pm local time, it all becomes real again.  Winnipeg deserves it, and long live this iteration of the team.

details the story of Bobby Hull’s arrival in Winnipeg as well as tales from other NHL heroes.