Brian Joyce is a graduate of Ryerson University's Sport Media program. For better or worse, Brian is a lifelong Toronto Maple Leafs fan. In addition to hockey, Brian also enjoys watching baseball, basketball, football, lacrosse and pro wrestling. Brian also works as an editor for WrestleTalk.com and as a digital content producer for Chikara Pro Wrestling. 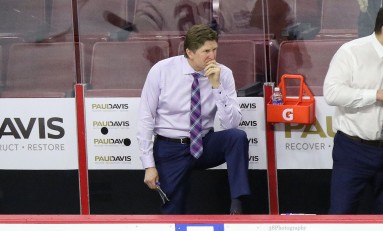 A Look at the Maple Leafs Coach Beyond the 2019 Playoffs

March 15th, 2019 As the 2019 NHL Playoffs draw near, head coach Mike Babcock and the Toronto Maple Leafs appear set to face the Boston Bruins in the first round for the second season in a row. Last season's first-round matchup between the two was momentous and led to yet another dramatic Game 7 encounter. Old demons resurfaced and the Bruins were able...
Page 4 of 41234
Jul 9th 5:33 PM
Women's Hockey