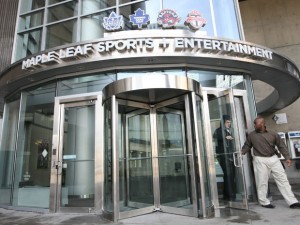 It has been a long, long while since it was first announced that the Ontario Teachers’ Pension Plan would be placing its stake in Maple Leaf Sports and Entertainment (MLSE) on the open market. Over that time, many rumours have surfaced.

From a New York firm to Wayne Gretzky himself, nobody really knew what to expect when it came to potential buyers. One name that did continuously pop up, though, was Rogers Communications, which had already owned Major League Baseball’s Toronto Blue Jays.

On Friday morning, the news was made official. It was, in fact, Rogers Communications that had purchased MLSE. However, that wasn’t all.

In a move that came straight out of left field, Bell Canada Enterprises (BCE Inc.) also bought in to the company.

Rogers and BCE will combine for a 75 percent share once the deal is all locked up, which isn’t expected to happen until mid-2012 once the move has been approved by the league.

Each company will own 37.5 percent of MLSE and are going to pay about $533 million respectively to make up for a total selling price of $1.32 billion. While it may seem a little steep at first, and it is, the price certainly doesn’t come as a shock.

A little over one week ago, Forbes Magazine released its annual rankings of National Hockey League teams by their worth. Once again, it was the Maple Leafs who sat in top spot at $521 million, $14 million more than the next highest team.

Now factor in everything else in which the two communication giants will own, and you can see how $1.32 billion came about.

You may find yourself wondering what has happened to Larry Tanenbaum, former owner of a 20 percent stake, as well as what is going to happen with the other 25 percent remaining. Along with the announcement regarding BCE and Rogers, it was revealed that Tanenbaum had upped his 20 percent stake to gain control of the remaining five.

So where does this leave the Leafs? Well, as Stephen Whyno─Washington Capitals reporter for The Washington Times─put it, Friday night’s game against the Caps, along with every other game, will be business as usual.

The Maple Leafs were not a budget team in the first place, and based on who just bought the team, there is absolutely no reason to believe that they will become one. With that, this move shouldn’t have too much of an effect on how the team goes about its business in terms of off-ice player transactions. However, this deal may be the death of Leafs TV.

Bell Media is the current owner of TSN, while Rogers Communications owns Sportsnet. Combined, the two channels will have shown 46 Leaf games by season’s end, a total of  56 percent of the Leafs’ regular season schedule. All other games are broadcast on Leafs TV and CBC’s Hockey Night in Canada.

There is almost no doubt that, once the chance is available to them, Rogers and BCE will show all Leaf games, as well as Raptors and TFC games on TSN and Sportsnet.

For the average fan, this move is nothing to be concerned about.