The Boston Bruins have had a rich history in drafting players and building competitive teams over the many years of this Original Six teams’ existence. However, they do have one negative stigma attached to their name and that is the notorious Joe Thornton trade with the San Jose Sharks.

The Bruins gave up Thornton for Marco Sturm, Brad Stuart and Wayne Primeau and have been criticized for it ever since.

Nov. 30, 2010, marked the five-year anniversary of the trade. In this past Tuesday night’s game vs. the Detroit Red Wings, Joe Thornton notched his 500th point as a Shark, giving him an average of 100 points per season with San Jose. The Bruins, however, haven’t received nearly as much input from any of the three players they got in return, and only one of those players is still on their roster (Marco Sturm, who has battled with injury over his years with Boston).

However, the Bruins may have redeemed themselves on the behalf of none other than the Toronto Maple Leafs, as they traded what I consider to be a mediocre forward in Phil Kessel (below) to the Leafs in exchange for TWO first-round picks. I say mediocre for lack of a better word as I do see Kessel as a successful 30-35 goal scorer (40 at best) but definitely not worth two early first-round picks and definitely not a star player to build a franchise around. One of the picks Boston received turned into Tyler Seguin, a high-powered forward who has the potential to one day be a No. 1 center, while the second pick is still up for grabs; and by the looks of the season so far, it could be another early first-round pick, maybe even a lottery pick. 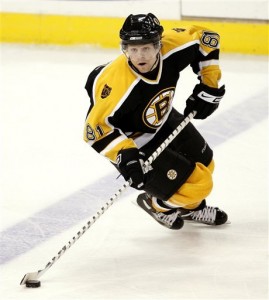 Phil Kessel in Boston prior to being traded.

Although the Toronto media tends to prematurely overreact in regards to the expectations of a rebuilding team, I still think they are still on the losing end of this trade. Yes, they acquired a pure goal scorer in Kessel, but for a hefty, hefty price as they still lack a star center and playmaker.

Leave it up to the Leafs to make a trade that one day could overshadow the Bruins failed Joe Thornton trade. Instead of fans blaming ownership, I’d say stick with blaming Brian Burke. Although I do believe he has come a long way with the Leafs, I think his vision may be a bit clouded in his obsession with American-born players. Mike Komisarek isn’t the best defender for the bucks he’s making, and the price paid for Kessel is far too high for a player who could even be known as a second-line, secondary scorer. On many teams around the league, Kessel would fail to be known as a first-line player, and even on the struggling Leafs, he’s been demoted to the second line. I just think there has been plenty of players on the market that could easily replace Komisarek, and I’m not sure if any other team would have given up two years of first-round picks for Kessel.

Although Leafs fans and the Toronto media have been scrutinized for their impatience and high expectations for this rebuilding team, I myself would not be happy as a fan with the Kessel trade alone, and I believe that is a huge reason why the Leafs will take much longer than needed to have success in the post-season.

Precedent has been set in this regard. The Tampa Bay Lightning were a flustered team with a losing record just two years before they won the Cup, but with a quick rebuild, in just two years (the length in which Brian Burke has been with the Leafs) they found themselves raising Lord Stanley over their heads.

As much as it is understood that rebuilding a team is easier said than done, some of the moves Burke has made are questionable, and it will be interesting to see how the rest of the season will pan out for the Leafs. 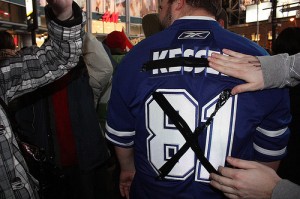 The Bruins have felt the wrath of a failed trade. Will the Kessel deal be another one to add to the books for the Leafs?