Jochen Hecht hasn’t played since suffering a concussion on September 18th, but yesterday he was cleared for physical contact by the Buffalo Sabres. 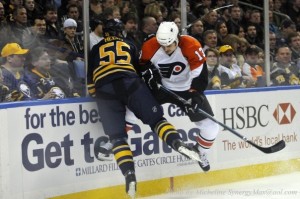 According to WGR550.com, Hecht skated the full 60 minute session yesterday afternoon, but head coach Lindy Ruff remains non-committal about his center’s status for this weekend’s games against Carolina and Pittsburgh:

It’s worth noting that in practice the lines did not change from this past weekend’s duels in Europe, so even if Hecht is healthy enough to play, things look like they may be staying the same, for now.

Hecht suffered a concussion back on September 18th, 2011 after getting hit in the face by teammate Shaone Morrisonn’s helmet. Morrisonn was waived from the team 7 days later to clear up cap space.

UPDATE 10/13: WGR550.com reports that Hecht will not be playing this weekend. To quote Ruff, “Jochen won’t be ready for this weekend. We gave him a little bit extra today, but we need to be sure this time around. We need to pound him and take him to the limit which we haven’t yet, but we’re getting close, but it’s not a case where we’re going to put him in and guess because he’s close.”