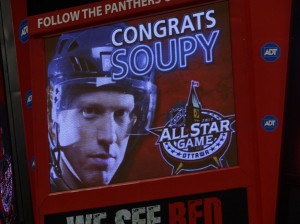 It’s All-Star weekend and a great opportunity to recognize one of the Panther’s top performers this year.  Defenseman and Alternate Captain, Brian Campbell was the lone Panther to make the All-Star squad.  Three Panthers made the ballot – Brian “Soupy” Campbell, Ed Jovanovski and Tomas Fleischmann.  However, Campbell will make the trip to Ottawa alone.

This year’s game is 6 1/2 hours from his hometown and he expects his parents to make the drive for the game.  Campbell is making his fourth appearance in an All-Star game.  He appeared while playing in Buffalo 2007 and 2008 and then again with the Blackhawks.  He was the leading vote getter amongst Eastern Conference defenseman for the 2007 NHL All Star Game.

Campbell got the nickname “Soupy,” as he shares his last name with the name of the soup company.

The 32 year old has had an impressive hockey career, which started when he first played hockey with the minor league in his hometown of Strathroy, Ontario.  He played AAA hockey and then signed with the Petrolia Jets Jr. B of the Western Ontario Hockey League.  Campbell was taken by the Ottawa 67’s in the OHL as a third round draft pick in 1995.

He was drafted by the Buffalo Sabres as their 6th round pick in the 1997 NHL Entry Draft.  He stayed with the team after playing his first game in the 1999-2000 season.  He was traded to San Jose in February 2008.
Dale Talon brought Campbell to Chicago, where he signed an 8 year contract in 2008.  After playing in 388 consecutive games, Campbell was injured in a boarding incident caused by Washington Capitals, Alexander Ovechkin.  He sustained a broken clavicle and broken rib and was expected to miss 7-8 weeks.  However, he manged to return by Game Four of the first round playoffs igniting the team to a three game win streak to knock out Nashville. 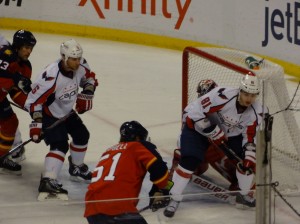 Campbell was re-united with Talon, when he joined the Panthers in the 2011 draft.

Talon brought Campbell to Florida this summer “as the centerpiece of his rebuilding project.”   Upon the acquisition, Talon said “I know what he brings to the table every night and I know how much he cares and how much he wants to play…we brought him into Chicago to win and they won, and we’re going to do the same thing here.  And he wants to win, as well, and wants to play a lot, and it’s fun to watch.”
Having played 48 games so far this season, Campbell is second among all defensemen with 35 points.  He’s tied for 7th among all skaters, with 32 assists.  He’s 4th in the NHL with 26:23 Time on Ice per game.
With those stats, he was an easy pick for the All-Star ballot.  Upon announcement that he was selected Campbell said “I felt like I had a fairly good first half  and can’t wait to represent the Panthers.”
Panther’s GM, Dale Tallon said “Great for Soupy, he’s earned it.”  “Hes had a great career and he’s playing really well for us.  I think that’s fantastic.”
This time last year, Campbell got engaged to his girlfriend, Lauren Miller, during the 2011 NHL All-Star break.  We wish Campbell and Lauren well and are looking forward to another great performance by Campbell in the All-Star game on Sunday.
After the All-Star break, the Campbell will rejoin the Panthers against the Washington Capitals, one of four crucial divisional games in a row.
Good luck, Soupy!

2012 Redraft: What if the Edmonton Oilers Didn’t Take Nail Yakupov?

Capitals Have Their Future Top Centers in McMichael & Lapierre

Rangers’ Offense in 2021 Can Be Special

Red Wings Have a Shutdown Defender in Jon Merrill