Throughout the preseason, the Montreal Canadiens regularly had players out of the lineup with injuries. Once most players came back for the opener, it looked like things would be going better. 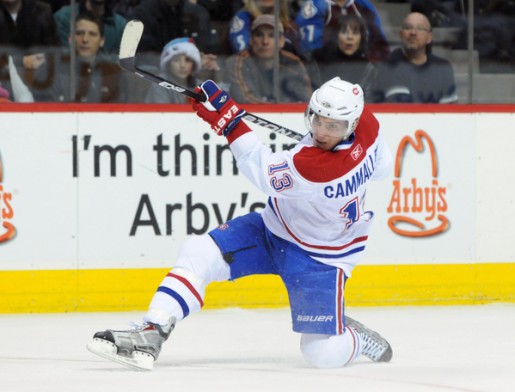 Mike Cammalleri out with a laceration to his leg (Icon SMI)

Then, in the season opener, Chris Campoli is out “months” with a ‘lower-body’ injury (one of those hockey terms that doesn’t tell you anything). Then, against the Winnipeg Jets, the team lost both Jaroslav Spacek and Mike Cammalleri to short term injuries. That adds to the list that already includes Andrei Markov and Ryan White. Another injured player, Lars Eller is expected to make his season debut against the Calgary Flames tonight.

It has called into question the Canadiens depth. Of the six defencemen expected to play in Thursday’s home opener, four have played less than 100 regular season games in the NHL and two (Alexei Emelin and Raphael Diaz) have two and one games respectively.

The Canadiens lost Jeff Woywitka on waivers and had and then returned Blair Betts because of his injuries. The team has recalled Aaron Palushaj, and have other players gaining experience in Hamilton and have enough depth in the system to have replacement players come up. The problem is that these players aren’t going to replace Cammalleri and won’t replace Markov. Andreas Engqvist for Ryan White? Sure, that can work. Travis Moen on the second line? Well, he is the second-leading scorer for the team but that is not his long term role.

For the Canadiens, it really comes down to Carey Price. If he stays healthy, it doesn’t matter who plays in front of him – they have a chance. So far this season, Price has looked very good and you have to be impressed with how the line of Scott Gomez, Brian Gionta and Max Pacioretty played against Winnipeg. They didn’t get on the board until late in the game, but had several scoring chances that lacked a bit of timing that is so hard to find early in the season.

The outlook on Cammalleri is better than what it could have been after we saw the injury on TV, but the team is currently very close to its limit of depth players. Any more injuries will really test this team and people should be very happy that when Yannick Weber was being moved to forward, he wasn’t moved to another team. His experience on the blue line will be an asset as the team waits for Diaz and Emelin to learn on the small ice and as they wait for injured players to return. If there are any other setbacks or any more injuries, I would expect the Canadiens to scour the market for even more replacements.

Islanders: Would a Trade for Travis Zajac Make Sense?