An uneventful preseason finally ended in Washington with a 3-3-1 record and no major shakeups to the Caps’ lineup. All cuts were predictable, and those who made the team were around the big club last season as well. It’s fairly simple — head coach Bruce Boudreau knew what players he wanted for his team and all that was needed to improve the team was dealt with during the offseason. 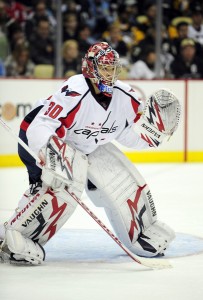 Yesterday, it was announced that last year’s eventual number one goaltender, Michal Neuvirth, would get the nod to start the home-opener Saturday against the Carolina Hurricanes. This comes despite Tomas Vokoun being dubbed the “number one” this year. Following the statement, Caps fans responded in dismay, claiming disrespect to Vokoun. To make matters worse, Vokoun’s agent later called the choice to go with the younger Czech goalie “a slap in the face.”

The next day, Vokoun cleared the air, saying that while he was disappointed he didn’t get the first start, he understood and sat back.

“They just said Michal [Neuvirth] had a good camp and they want to have that recognized,” said Vokoun after practice according to The Washington Post’s Katie Carrera. “They didn’t tell me that yesterday but today they told me, you know, it’s not reflection on me. They’re as much as confident in me as they were two months ago.”

Boudreau, however, declined to respond on the goaltending issue on Saturday and fans still sat in confusion.

Gameday afternoon, the public was provided with the information that center Marcus Johansson was a healthy scratch for the opener as well. Last season the Swede, who just celebrated his 21st birthday October 6, quickly became liked among Caps fans after his strong performance. Now in his second year, Johansson has received consideration to pivot the second line and at times, even play wing. If you haven’t guessed it yet, then, frustration came out as well from the DC faithful about the scratch.

While I, among others, have been critical of the man in Johansson’s place, Mathieu Perreault, Perreault had a strong showing for the Caps during the preseason, putting up five points (3 goals and 2 assists). While Boudreau didn’t comment on the situation in net, he did state that Perreault’s recent performance deserved a crack in the lineup.

Carrara had in her post, “We want people to come into our camp thinking that, not just this year but for 20 years, there’s a chance to make the team and you bust your butt and are the best player,” said Boudreau. “He deserves to play.”

In defense of those who “Rock the Red”, their team still hasn’t won a championship (they don’t need the reminder, trust me), and the last two years, they have been in an unfamiliar position of seeing their team as favorites to win the Stanley Cup, only to see the all-too-familiar result of an early exit. Once again, the team is expected to be an NHL-juggernaut, but at the same time, patience is wearing thin.

However, in the name of rationality, there is no need to be upset this early in the season. Vokoun will get his starts, and most likely put up a solid year. Johansson will get back into the lineup. After all, it’s only the first game of the season. The Caps aren’t throwing games by putting Perreault and Neuvirth against Carolina, which is what the concern should be about — winning.