New York Rangers Captain Ryan Callahan was raised with a sense of dedication and hard work. During the filming of the HBO documentary 24/7, the Rochester, NY native graciously allowed fans and fellow leaguers a glimpse into his familial ties of his blue collar upbringing. With economies in peril and populations perplexed on the future, Callahan captured the essence of persistence and patience during difficult times.

For New York Rangers fans, this season has been a refreshing blast from the Rangers of Christmas past. Icons Mark Messier and Brian Leetch have returned to the spotlight, and the Hudson River Valley rivalry with the New Jersey Devils are all revisited this season. The Rangers will meet the Devils in a battle of wills as the Devils surge on a four-game win streak and the Rangers intensify their play as the Winter Classic approaches. From this point on, the Blueshirts cannot let their guard down. Approaching the holidays can be a distraction; however, the team is prepared to face the challenges from the Devils and the Flyers.

Under Callahan’s leadership and the no-nonsense coach approach from coach John Tortorella, the Rangers will maintain the quality of play expected with the current talent who has inspired a working man’s momentum. There’s no occupying the Garden; it’s get-to-work time to keep their rank. The Rangers have a great start with young talent in Dererk Stepan, Artem Anisimov and Michael Del Zotto plus Callahan’s six years of experience with the organization. Callahan is the first captain of the Rangers to come up through the organization since Brian Leetch from 1997-2000. Ryan shares the legacy with two-timer Mark Messier, Philadelphia Flyers Jaromir Jagr and previous captain Chris Drury.

“Ryan Callahan embodies all the leadership qualities we seek from our Captain,” Rangers GM Glen Sather said in a statement.  “He leads by example with courage and a tireless work ethic on and off the ice, which is why he is so deserving of this honor.” 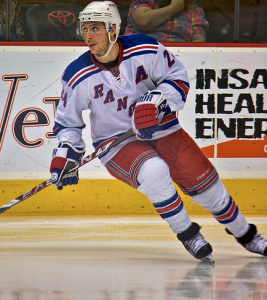 On his leadership style, Ryan acts as a role model. “On the ice, I try to lead by example and try to play kind of the identity we created last year and have guys follow that way. At the same time, in the room, I think if I need to be vocal I can be. I think the thing for me is just continuing to do what I do and guys follow.”

When selecting a captain, Torts thinks highly of the choice and how it’s impacted the upswing of the team’s scoring chances. “We’re a straight-ahead team, a hard-working hockey club. No-nonsense. I could be talking about the hockey club – who am I talking about here, the hockey club or Cally right now? That’s just the way he is. It goes along with it. It’s a great question, both of the last two questions, because it’s molded that way for a Ryan Callahan-type player to  be captain of this club.”

On playing in the Winter Classic, Callahan is excited about the rivalry but still wants to win and collect the two points. The Rangers image grew twice its size during the 24/7 documentary when Callahan’s grandma gave her grandson a kiss on the cheek. Cute and confident in her blood, fans can sleep better knowing she’s on our side. Let’s go Rangers!