This year’s All Star Game will be held in Ottawa, Ontario, Canada and will once again see the teams selected by Team Captains in a draft type format.  If I was a betting man, I would bet that Daniel Alfredsson will be one of the captains chosen.  But who will the other be?

Despite playing for the Senator’s biggest rival, Phil Kessel of the Toronto Maple Leafs is not likely to be picked last as the speedy winger currently leads the league in Goals (16) and Points (31).  On the other Hand it’s not for sure that Alexander Ovechkin will even make this year’s game as he currently sits #13 on the forward list with 60,675 votes and he has struggled mightily this year.  Phil if I can give you some advice, make sure your smartphone is charged and that your camera flash is ready as you will be a starter in this year’s game.   Here is a small video recap of the final pick in last year’s NHL All Star Game Draft put on by TSN.

While we don’t know if the Great Eight will get voted in, we can guess that the Chicago Blackhawks will be well represented at the big game.  Currently there are seven Hawks represented on the NHL.com Leaderboard.

The top vote getter to date is Ottawa Senators defenseman Erik Karlsson.   Oh! Did I mention that the game is in Ottawa? But really, this young, up and coming kid defenseman has proved that he belongs in this league and he more than certainly belongs at the All Star game.  He currently leads the NHL with 20 Assists, scoring by a defenseman with 21 points and he is 13th overall in total ice time among D men. Ottawa fans are a very passionate bunch and they are sure to get out and vote their big stars into the game.  3 of the Top 4 Forwards are also from Ottawa as Daniel Alfredsson (#1), Jason Spezza (#3) and Milan Michalek (#4) are out in front. 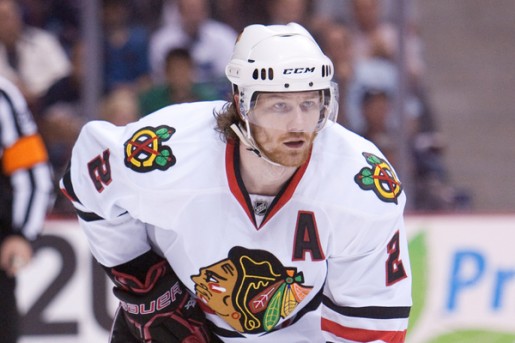 Duncan Keith leads all Hawks in voting and this former Norris trophy winner is sure to get in.  He currently sits 12th in points by a defenseman despite missing 3 games to injury.  Brent Seabrook sits 8th in voting and is likely to get consideration, although a case could be made for sophomore Dman Nick Leddy outing him to get into the game.  Leddy’s play has propelled him into a top 3 defenseman for most teams.  He has also played in key situations especially with Keith and Seabrook being sidelined for parts of the season.  Fans wanting Leddy in will have to put him as a write in vote and overlook Brent Seabrook in order to put the youngster from Eden Prairie, Minnesota into the game.

Among the Forwards, you have to think that Toews and Kane are a lock to make it.  They sit in 6th and 8th respectively.

Toews, with his torrid play of late including a 5 point outburst versus the Anaheim Ducks, has moved into 6th in NHL scoring with 13 goals and 25 points and he is tied for the league lead with 4 GWGs including the last 2 games on their western swing.  This guy is a machine and I personally think is bound to being a finalist for the Hart Trophy.  I won’t get into it here, but let me just say that I think Toews is the NHL’s top all around player over Crosby, Perry, Ovechkin and anyone named Sedin.  Toews has done it all.  He has won the Stanley Cup, an Olympic Gold Medal, a Conn Smythe Trophy (second youngest ever to win, youngest captain to win) and he was voted the best forward at the 2010 Vancouver Olympics.  He was also a runner up to his teammate Patrick Kane for the 2007-08 Calder Memorial Trophy and he plays in both ends of the ice.  He is Captain Serious. Toews was second in voting at last year’s ASG with 407,676 total votes, second only to the kid with all the hype, one Sidney Crosby.

Patrick Kane was seemingly born at an all-star game or at the very least, he was made for one.  Kane is a human highlight reel and fans across all team uniform lines will want to see a Patrick Kane at the All Star game, except for anyone with affiliations to the cab drivers of America.  This former first overall draft pick has been to two All Star Games in his 4 year career and is looking to make a case for 3.  He sits 3 points behind Toews for the team lead in points with 23 and is a +9 through the first 24 games.  He’ll be dancing his way into Ottawa hearts and minds for sure.

Also making a strong case are veteran forwards Marian Hossa and Patrick Sharp, who while they aren’t locks are definitely all stars and should be chosen.  Goaltender Corey Crawford looks to be a long shot.  If voting ended today, Crawford would be on the outside looking as he is currently ranked #12th.

Other notable forwards who aren’t guaranteed a spot are Sidney Crosby (#9) though he could be making a surge. Pavel Datsyuk (#12) will he even want to play?  Alex Ovechkin (#13) who just helped his coach to get the can and Steven Stamkos (#22) who’s production is way down from a year ago.

Chicago rival, the Vancouver Canucks will need to really pull up their socks if they hope to make an appearance.  Among the forwards Daniel Sedin sits 14th, Henrik Sedin is 17th and Ryan Kesler is way down at #20.  Defenseman Alex Edler is the only Nuck blue liner at #13 among defensemen.  Roberto Luongo is currently on the outs sitting #9 among goaltenders.

Fans still have until 11:59 on January 4th, 2012 to place their votes for their favorite players.  If you really want to frustrate the fans in Ottawa, you’ll vote for Kessel, Lupul, Liles, Bozak, Phaneuf and Reimer.  But at the very least, place your votes and get your favourites in and knock out those that you think are due for an all-star game break.