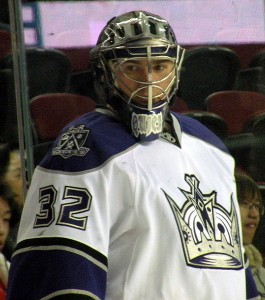 ‘Crashing the Crease’ is a new feature here on The Hockey Writers that will take a run through the major happenings in the NHL.  Want us to feature an interesting article or your blog?  Send us an email.

~ I never understood why over a half dozen teams were reportedly bidding for the services of Raffi Torres at the trade deadline.  0 goals as a Buffalo Sabre and scratched for Game 6 facing elimination is only the tip of the iceberg for Jerry Sullivan: “A major change or two is in order. Ownership should make it clear that simply making the playoffs isn’t good enough. Make someone accountable, whether it’s Regier, Ruff, or one or two of the soft, underachieving forwards.”

~ Penguins head coach Dan Byslma is now an undefeated 5-0 in playoff series, but don’t let his calm demeanor on the bench fool you: “One constant, though, is Bylsma’s energy level.  The guy could bounce off of a Velcro wall. On his more sedate days.”

~ Ian Laperriere was in Pittsburgh yesterday, but he wasn’t scouting the Penguins.  The Flyers veteran tough guy could miss the remainder of the season after taking a puck to the face in round one: “The brain contusion, being called a mild concussion by doctors, is just one part of the injury. He also fractured the right orbital bone, required 60 to 70 stitches to close the wound above his eyebrow, and is still experiencing blurred vision.”

~ Tom Poti won’t be in the lineup for Game 7 and possibly much longer for the Washington Capitals after suffering an eye injury that requires surgery.

~ Could Ken Hitchcock be the next coach behind the bench for the New Jersey Devils? “Hitchcock’s coaching philosophy is not unlike that which the Devils have adopted for over a decade. He is respected and won a Stanley Cup with the Dallas Stars in 1999, where he coached current Devils captain Jamie Langenbrunner.”

~ It’s never easy for a goaltender to move from a backup or shared role to full-time starter. Kings coach Terry Murray is second-guessing the workload he heaped on Jon Quick down the stretch: “Quick appeared in a franchise-record 72 games and played 4,258 minutes and 27 seconds, second in the NHL. Of the eight goalies who played at least 4,000 minutes only San Jose’s  Evgeni Nabakov reached the second round of the playoffs.”

~ Young, playoff-ready defensemen have been the quiet story of this year’s playoffs and Drew Doughty was a beast along the blueline for the Kings. Where did he come from?

~ The Dallas Stars and owner Tom Hicks are denying they were among the six teams reportedly needing an advance of revenue sharing and television money from the league.

~ Where will Sheldon Souray end up next season? Mike Heika looks at whether Dallas would be a good fit: “Souray does indeed bring some things the Stars need. He is a top-two defenseman who has size (6-4, 233) can play top minutes (averaging 23 minutes or more in the last six seasons) and has a bomb of a shot on the power play.”

~ Chicago called-up eight reinforcements in preparation for round two.

~ Contrary to previous years, the NHL isn’t wasting any time getting the next round started.  Sharks and Wings will meet tomorrow night in the ‘Tank’ at 6pm PST.