Sometimes you need to subtract before you can add.

On Wednesday the Dallas Stars dealt enforce Krys Barch and a 6th round pick to the Florida Panthers in exchange for right wing Jake Hauswirth and a 5th round pick. Barch, 31, had 0 points and 23 penalty minutes in 10 games for the Stars, while Hauswirth, 23, has 12 points in 16 games playing for the Central Hockey League’s Rio Grande Valley Killer Bees. And yes, that actually is their team name.

“I want to thank Krys Barch for his time that he spent here,” said Stars GM Joe Nieuwendyk about the trade. “I think he’s been a good teammate and a good warrior. He stuck up for his teammates and he did everything you want him to do in that role. He was looking for more of an opportunity to be a contributor, we respected that and we wanted to work with him. We found a team that might be a good fit for him.” 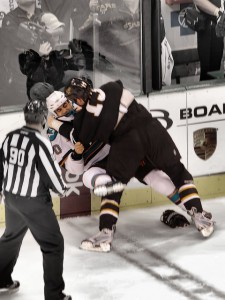 Krys Barch will be taking his enforcing skills down to Florida. (flickr/HermanVonPetri)

Nieuwendyk pretty much summed up Barch’s place with the Stars. He was a decent middleweight fighter, a hard hitter, and a good teammate, but not much beyond that. The Panthers were looking for some toughness, experience and depth, and Barch can provide all three for a cheap price.

What Nieuwendyk didn’t mention, however, was that Barch didn’t get traded because he really liked the return: the move was most likely spurred by the continuing emergence of young winger Tomas Vincour.

Vincour, 21, has 2 points in 10 games after spending most of the early season with the AHL’s Texas Stars. After injuries hit Dallas he was recalled and has been playing excellent hockey on Dallas’ 2nd line, as well as the extra minutes that the role brings: Vincour recently bumped up his time on ice average per game up to 13:01.

Apparently Dallas wants an even longer look at Vincour. With the team already having 14 forwards on one-way NHL contracts, and Brenden Morrow and Adam Burish getting closer to returning from injury, a move had to be made to make room for the young Czech. Barch, a pending unrestricted free agent with an average of 6:43 of ice time per game this season, was the easy choice

Right now this move looks like a simple roster dump for the Stars, but hey, who knows. Maybe the team can find another 5th-round gem like they have in recent years with Jamie Benn, Philip Larsen and, oh yeah, Vincour too.