Injuries have not been kind to the Dallas Stars as of late. 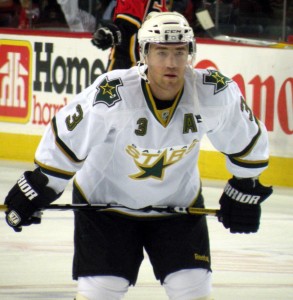 Is Stephane Robidas' time as a defensive leader in Dallas coming to an end? (Resolute/Wikipedia)

While it’s never fair to blame all of a team’s struggles on injuries, as they are something that all teams must face each year and an obstacle that the more elite of teams find ways to overcome, the loss of key players has taken a measurable toll on the Stars in recent weeks. After getting Kari Lehtonen, Stephane Robidas and Sheldon Souray back from injury, the Stars were then dealt the unfortunate fate of losing their #1 and #2 centers, Jamie Benn and Mike Ribeiro respectively.

While their 4-5-1 record over the past ten games isn’t ideal, especially in the league’s playoff-hungry wild Western Conference, the 10th-place Stars can at least look at a few bright spots shining through the slump: the team still only sits three points back from a playoff spot, none of the current injuries woes are long term, and the absence of veterans has given some of the team’s prospects a chance to showcase themselves in higher-responsibility roles.

That being said, here’s a quick rundown of some of the more noteworthy individual stories currently developing with the team:

–Wandell’s big break: After years of working his way up through Dallas’ depth charts, albeit at a longer pace than Stars management probably would have liked, center Tom Wandell is finally getting a chance to show himself on the team’s top two lines, thanks to the injuries up the middle to Benn and Ribeiro. However, the results of his play as of late have received mixed reviews; there is notable improvement with his puck possession and scoring chances, especially in comparison to a disappointing 2010-2011 season that only saw him register 7 goals and 2 assists, but the concrete numbers aren’t coming yet, with only 1 goal and 1 assist in the 8 games where he’s seen extended minutes. The 24 year-old Swede has a long hockey career ahead of him, but if he doesn’t start making the most of his opportunities he may find himself bumped back down the team’s depth chart, possibly permanently.

–How much does Robidas have left in the tank? All great NHL players, at some point or another, eventually come down from the prime of their careers. Some of them earlier in their careers, some of them later. At age 34, defenceman Stephane Robidas is showing signs that his years of leading the Stars blueline may soon be behind him. His current -8 rating is tied for worst among Stars defenceman, his 13 points projects to a total that is in decline from the past three seasons, and he has played the last three games with reduced ice time as part of Dallas’ third defensive pairing. A true warrior in every sense of the word and a player that consistently handled himself well in situations that were probably above his skillset, years of intense physical play may have finally take their toll on the undersized defenceman, but don’t expect him to drop out of the big picture in Dallas without a fight.

–Watch out for Matt Fraser: If 21 year-old forward Matt Fraser can continue his upward trajectory at it’s current pace, he could be soon turning heads in more places than just Dallas. A rather quiet signing of the undrafted Fraser, then with the Kootenay Ice of the WHL, in November of 2010 is quickly looking like the Stars found a diamond in the rough. In the last year he’s torn it up everywhere he’s gone, starting with a  solid WHL regular season (74 points in 66 games), but then following it up with a stellar playoff campaign (27 points in 19 games, helping the Ice to a WHL Championship), a strong Memorial Cup showing, a great Traverse City prospect tournament, an impressive showing in Dallas’ training camp and preseason and now, most impressively of all, scoring 21 goals in his first 40 games with Texas of the AHL, putting him 4th in the entire league. A big, physical winger that has surprising speed for his size, Fraser’s best talent is one that can’t be easily taught: a knack for finishing plays when he gets in tight on net. He’s played one game with Dallas so far this season, playing a safe 3:57 of ice time, but don’t be surprised if it’s not the only time that Frasers plays in the NHL in the near future.