Though the Detroit Red Wings have been around since the 1926-27 season, they’ve only had a few 50-goal scorers don the winged wheel – only six, in fact.

While the NHL underwent a scoring revolution in the 1970s and 80s, the Red Wings were deep in the midst of their “Dead Wings” era and did not feature many elite players. In addition, the offensive faces of the Original Six-era teams — Gordie Howe, Ted Lindsay, Sid Abel, and Alex Delvecchio—never lit the lamp 50 times in a season at any point in their careers.

It took until the 1972-73 season for the Red Wings to produce their first 50-goal scorer: a familiar face to almost all Red Wings fans today. 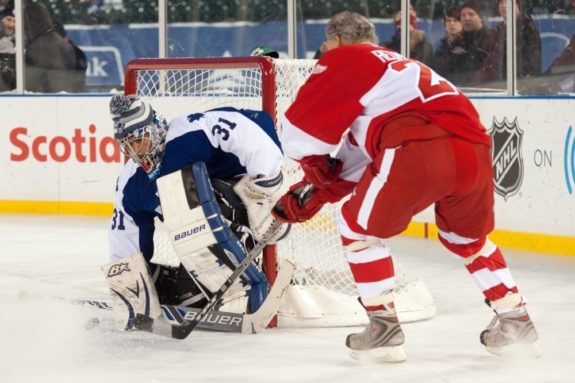 Yes, the first 50-goal scorer in franchise history was none other than our beloved color commentator Mickey Redmond. After the Red Wings acquired Redmond from the Montreal Canadiens, the ginger ale and curly fries enthusiast fired home 52 goals during his second full season in Detroit. “Mick” followed up that performance with a 51-goal campaign the following year before injuries started to take their toll on Redmond.

Who? Before the 1974-75 season, the Red Wings traded Henry Boucha to the Minnesota North Stars for scoring forward Danny Grant. The year after Redmond’s last 50-goal season, Grant picked up the slack with 50 goals of his own.

Grant would go on to post respectable offensive numbers in Detroit, but never again reach the 50-goal plateau. Like Redmond, injuries also got to Grant and the winger was dealt to Los Angeles as his NHL career was winding down.

Hockeytown would not see a 50-goal scorer again until the 1984-85 season, when “Johnny O” set a then-franchise record with 55 tallies. Playing alongside second-year center and face of the franchise Steve Yzerman, John Ogrodnick thrived in Detroit until he was traded to the Quebec Nordiques. Like Grant, he only reached 50 goals in a season once during his career. Ogrodnick now is a member of the Detroit Red Wings Alumni Association and participates in charity games across Michigan with Redmond and others. 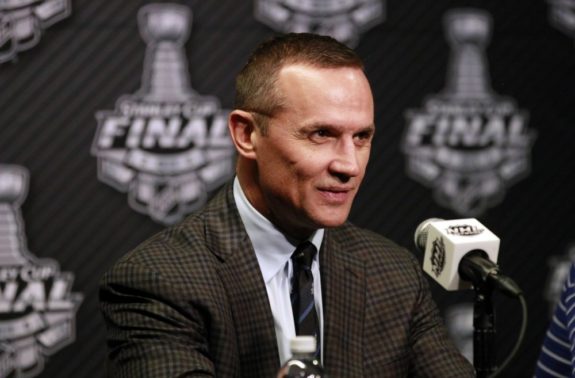 It took Yzerman a few years to really get going, but when he hit his prime, Stevie Y was close to unstoppable. Between 1987 and 1993, Yzerman recorded five 50-goal campaigns, including 65 goals during the 1988-89 season. That goal total still stands as the franchise record for one season today.

Under Jacques Demers and Bryan Murray’s guidance, Yzerman was nearly on the same offensive level as generational talents Wayne Gretzky and Mario Lemieux. Only Scotty Bowman’s mandate to play a more defensive game prevented Yzerman from reaching the half-century mark after the 1992-93 season. As a result, a more well-rounded captain made the Red Wings that much better – Yzerman’s 1997, 1998, and 2002 Stanley Cup rings are evidence of that.

Look back at the 1993-94 Red Wings – the team was an offensive force in the NHL. Yzerman, Ray Sheppard, Sergei Fedorov, Slava Kozlov, and Keith Primeau combined to score an outrageous 197 goals, just one less than the entire 2016-17 Red Wings scored.

Sheppard’s 52 tallies were the most the winger would record in a season throughout his career. Though he was not the fastest player on the ice, Sheppard had quick hands and a nose for the net. He’d score 30 the next year during the Lockout-shortened 1994-95 season, before being traded to the Sharks early on in the 1995-96 campaign for Igor Larionov. 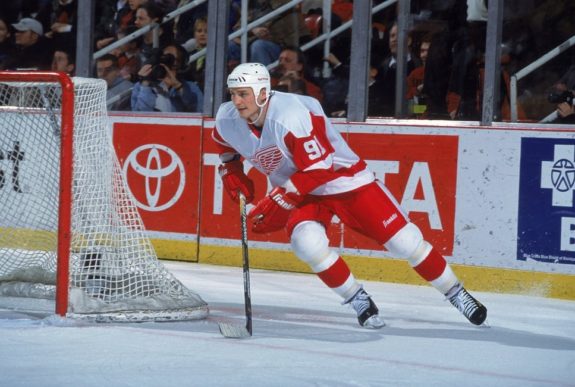 5 Feb 2001: Sergei Fedorov #91 of the Detroit Red Wings skates around the net during the game against the Ottawa Senators at the Joe Louis Arena in Detroit, Michigan. (Tom Pigeon /Allsport)

It’s incredible to think that Fedorov only had one 50-goal season to his name – the dynamic Russian center lit the lamp 54 times alongside Sheppard during the 1993-94 campaign. That year, Fedorov also took home some hardware at the annual NHL Awards showcase. He received the Lester B. Pearson Award as the NHL player-nominated MVP (now the Ted Lindsay Award) and the Selke Trophy as the league’s best defensive forward. Pretty good for one season, huh?