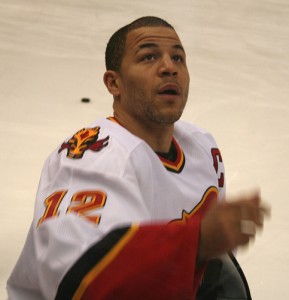 Jarome Iginla and the Calgary Flames are off to a slow start to the season. (Stu Switzer/Flickr).

The finger-pointing and hand-wringing seems poised to begin in the Stampede City after the Calgary Flames dropped a pair of games over the weekend to start off the season winless.

The losses – 5-3 against Pittsburgh on Saturday and 5-2 against St. Louis on Monday – have prompted a great deal of nervousness, as a similarly dismal beginning last season seemed to seal the fate of then-general manager Darryl Sutter. The ditching of Sutter from the team’s helm after the Flames dropped to 16-18-1-2 after the first 37 games of the season (well out of playoff contention) seemed to indicate to fans and media alike that Darryl himself was the problem. A dreary, winless start to this season could indicate otherwise.

Then again, that line of thought is a bit misguided. The National Hockey League season is a very long one, and it is folly to extrapolate an 0-2-0 start to an 0-82-0 finish.

The worst start the Calgary Flames ever got off to was in 1995-96. Coached by veteran Pierre Page and led by names like Theoren Fleury, Cory Stillman and Gary Roberts, the team stumbled out of the gate and promptly got run over by their opposition. Repeatedly. On their season-opening seven-game road trip (made necessary by renovations to the Saddledome), the team went 0-3-3. Then they got out-classed on a brief two-game homestand, and finally were hammered 7-2 in Anaheim. The team finally won their first game on October 31 in Los Angeles. They wouldn’t win a home game until November 14.

After such an embarrassing beginning to the season, it was thus a bit surprising to see Calgary actually make the playoffs. The 1995-96 season holds several team records for worst ever start, even including the Flames’ stay in Atlanta: latest win (Game #11), fewest points after 10 games (three) and fewest points after 20 games (10). Despite all of these atrocious figures, the team managed to grab the sixth seed in the Western Conference (although they were swept by a much better Chicago Blackhawks team).

On the other hand, a good start also means absolutely nothing. When we set the Way-Back Machine to the 2001-02 campaign, fans witnessed a stellar start from the Flames. After 20 games, the team seemed unbeatable – posting a 13-2-3-2 record and making coach Greg Gilbert and goalie Roman Turek look like gods. Then the wheels fell off. Turek signed a big contract extension and his play fell off. The behind-closed-doors feud between Gilbert and center Marc Savard spilled into the public and disrupted team chemistry. Team captain Dave Lowry was stripped of the captaincy in February amidst the team’s free-fall. The Flames finished 15 points outside of the playoffs.