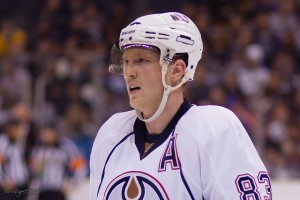 One of the biggest keys to generating offense in today’s NHL is the ability for teams to get the puck up the ice quickly from their defensive zone. The elimination of the red line and the two line pass rule enables a much faster transition, and emphasizes the importance of having a solid puck-moving defensemen. Look at the best teams in the league, and you’ll find d-men who can get the puck to their forwards extremely quickly. Those teams who don’t have such players are constantly in search for them. The Edmonton Oilers possess some good puck-moving defensemen. Problem is, they aren’t playing. Ryan Whitney, Tom Gilbert and Cam Barker are all out with injuries, and their absence has severely affected the Oilers ability to generate offense. Despite the talented forwards the Oilers boast, they simply don’t posses the puck enough. The defense, while somewhat efficient at limiting legitimate opposition scoring chances, just can’t get the puck out of their zone with enough regularity.

The Oilers have scored one third of their goals on the powerplay, the most in the NHL. They average 26.1 shots per game, ranked 29th in the league. They score an average of 2.46 goals per game, good for 23rd in the NHL. With the kind of skill the Oilers forwards posses, they should be able to generate more goals. But they simply don’t have the puck enough. The Oilers are ranked 14th in shots against, which speaks to the strengthening defensive side of their game, but they aren’t scoring enough to string wins together. Last night against San Jose, they were badly out-shot 45-18, but that was due in part to a 5 minute powerplay for the Sharks in the third period. Ales Hemsky went knee on knee with Sharks defenseman Brent Burns and was given a game-misconduct. Burns was forced to leave the game in considerable pain. There won’t be any supplemental discipline on Hemsky, but his penalty allowed the Sharks to tie the game. The Oilers went on to win in the shoot-out, but it was just their 6th victory in the past 23 games.

The numerous injuries that the Oilers have faced this season have set them back, but the frustrating part is that it’s hard to evaluate what kind of team Edmonton is when fully healthy. There have been talks about GM Steve Tambellini getting a contract extension, but all is quiet regarding head coach Tom Renney. In three seasons with him behind the bench, the Oilers have failed to make the playoffs, and finished last overall twice. Unless the Columbus Blue Jackets suddenly make a surge, Edmonton won’t have the dubious distinction of a third straight season in 3oth place. The Oilers have had bad luck in the injury department, that’s for certain, but there is still a long way to go for this once storied franchise. The re-build is taking time, but they aren’t looking for any quick fixes, and aren’t giving away picks or prospects to try and speed up the process. Hopefully they will stay the course come trade deadline.