Week 16 is a very unique one and indeed we encourage you to look at Garrett Rees and his “Look Ahead”. The All Star Break does throw a monkey wrench into the fantasy week but now it is time to get moving.

As 2012 rolls on in fantasy leagues, it is time to first reveal our Fantasy Player Of The Week. 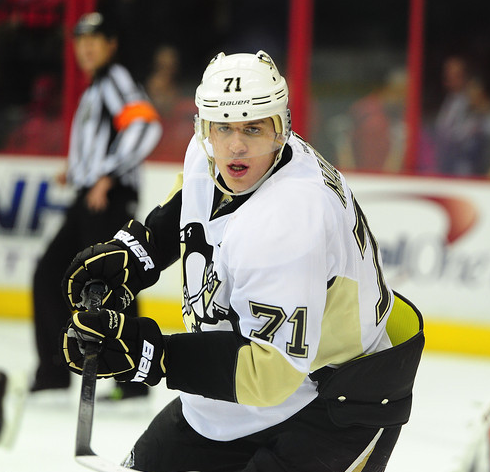 Congratulations to Evgeni Malkin on winning this week’s Fantasy Player Of The Week AGAIN. The Pittsburgh Penguins forward tallied a whopping twelve points and that included eight goals on the week. More importantly for Pittsburgh was that Chris Kunitz and James Neal were not only along for the ride but producing big as well. The Penguins have now won six straight games and are back on stable footing as far as a playoff spot in the Eastern Conference.  This top line has to sustain at this high level in order not only to be fantasy reliable during Week 16 but beyond. Malkin is clearly the anchor and fantasy anchor in the NHL right now. His 58 points in just 41 games are the gold standard for fantasy along with seven game winning goals.

Sidney Crosby (Pittsburgh Penguins) — The nicest way to say this is the following. Congratulations on Crosby finally skating last week but he is scheduled to see his “concussion team” this week. Reality dictates that nothing has changed in the least so simply he is still not due back anytime at soon ladies and gentlemen.

Mike Green (Washington Capitals) — Green is still out as he went right back on the injury list with the same groin injury once again. If you are in a one year league, Green should be dropped immediately. If you are in a keeper league, stash him away until further notice or maybe just until next season. It is for the best fantasy fans.

Kris Letang (Pittsburgh Penguins) — Letang is back with a vengeance ladies and gentlemen and he is healthy which is most important. The Pittsburgh defenseman had four points on the week which tied him with a slew of other defensemen for top honors.  He will not be on this list next week.

Andrei Markov (Montreal Canadiens) — When guessing if Markov is going to play, we suggest consulting a psychic first. While this is no laughing matter, the knee injuries and setbacks have just sent anyone who still owns Markov into a land of confusion. Our suggestion would be he is at least three to five weeks away minimum and the possibility exists that this season is indeed done. Basically insurance is insurance right Pierre Gauthier? Right! Markov probably should not be in your future fantasy plans either. Gauthier does insist that Markov will be back not too long after the All Star Break. Do not believe the hype.

Simon Gagne (Los Angeles Kings) — Gagne is currently on the IR with concussion like symptoms and with his previous concussion history, it may be awhile before he comes back. Yes simply Gagne is likely out until after the All-Star Break barring a miracle and this could potentially linger into February. Just proceed with extreme caution here! The problem lies in the fact that Gagne has not even been able to progress to basic baseline tests to see if he can start skating individually. We will keep you posted.

Matt Duchene (Colorado Avalanche) — Duchene will be out another couple weeks with a knee injury. Duchene was honestly having a below average fantasy season (by his standards). Maybe the injury will allow him to have a nice second half push. Expect him back around the first week of February. Duchene is making strides and could be back as soon as the end of next weekend, not this weekend obviously.

James Wisniewski (Columbus Blue Jackets) — Wisniewski is injured again with a broken ankle that will keep him out at least a minimum of 6 weeks. His 17 points in 29 games is nice but that -18 is an eyesore that cannot be ignored. Stash him on your IR until about the end of February.

Patrick Sharp (Chicago Blackhawks) — Sharp is recovering well and could be back in the next couple weeks. The upper body injury has healed well enough it seems that he should be skating during the ASB. Get ready fantasy fans.

Mikko Koivu (Minnesota Wild) — Just a quick note as Mikko Koivu will miss at least a month with a shoulder injury not two weeks as reported in Week 15. We do apologize but sometimes setbacks and a new diagnosis comes in. Hopefully you have alternative fantasy options and the waiver wires do seem to be bursting at the seams lately.

Jamie Benn (Dallas Stars) — Benn is recovering from an appendectomy that caused him to be put on the IR retroactive to Jan. 15th. He should be available just after the All Star Break according to our sources barring any further infection and it appears now he will be ready for the All Star Game.

There are other injuries but these are ones that impact fantasy rosters the most  at the moment. Players like R.J. Umberger will be activated tonight and so many others are coming and going so it is important to check out Twitter for the absolute latest.

These are for the players who have seen their values shoot up in Week 15.  Some are waiver wire pickups but most are not. January often brings out the best and worst in fantasy weeks and then there is the All-Star Break which creates its own headaches.

James Neal (Pittsburgh Penguins) — Hey he is not just a sidekick to Evgeni Malkin, but he produces pretty efficiently as well. Neal had eight points in Week 15, including three yesterday against Washington. It was a balanced four goal, four assist effort for the Winger who is just doing everything right unlike last year where it seemed to go wrong with Pittsburgh. Not only can you expect much of the same in Week 16 but Neal may be on pace to top the 80 points mark and that certainly was not expected at the start of the season, now was it?

Erik Cole (Montreal Canadiens) — Yes the Habs have fallen on hard times but their top line is a very viable fantasy alternative and still not commonly known. Cole did have six points last week on a team that really only had one good showing (against the Rangers). In a bit of a surprise he did have five assists on the week as Max Pacioretty was the recipient of three of those passes. If you are desperate for help and there are relatively few options out there then Cole may just be your guy.

Scotty Hartnell (Philadelphia Flyers) — With quite a few fantasy standout performances, it became tough to distinguish all of them from each other but try we might. Especially in leagues where goals are more heavily weighted, Hartnell was extremely valuable with six goals in Week 15, including a natural hat trick in the second period of the Boston game on Sunday. He had 25 goals on the season, is on pace for 40, but surprisingly is on pace for 175 hits. It is yet another facet of a player’s game that goes unnoticed that can get you to the fantasy promise land.

Steve Mason/Ilya Bryzgalov (Columbus/Philadelphia) — Honestly the two goalies are one in the same. The only difference is one plays on an awful rudderless team and the other plays on a semi-contender. Both have sub .900 save percentages, are still on shaky ground, and have caused their teams a respective heartburn that cannot be quashed. For example, Bryzgalov followed up a 30+ save, 1 GA performance against New Jersey with a five goal clunker and shootout loss to a Boston team that looked gassed. If you dare even start either of these goaltenders on Week 16, one may want to consider undergoing an MRI on the brain. This is truly a repeat more as a public service announcement not to start either goalie.  Sergei Bobrovsky and Jonas Hiller are much better alternatives for fantasy fans and they are still available in most leagues.

Ryan Miller (Buffalo Sabres) — When you have looked bad since your injury then get blindsided when playing with family in the audience, it is a sign that nothing is going right.  Miller was pulled on Monday Night after allowing five goals. It was just not the porous defense but Miller just lacks confidence and the frustration is showing and mounting. Dropping him is not a wise idea at this time but you may want to bench him against New Jersey considering how bad he has been against New Jersey the last couple seasons. Miller is someone who could maybe fetch a bit of value in a trade but only if you can find a partner willing to take a very low offer.

Los Angeles Kings lack of scoring depth — This is rare that we go with a team dishonor of sorts but the Kings could not score for Jonathan Quick if their life depended on it.  Five goals in their last four games and two of those literally went off their own body parts. The shots seem to be there but the finish vanishes like a bad B-rated film. Even top liners like Anze Kopitar and Dustin Brown have had their moments along with Mike Richards. If only they had a few more goals, just imagine how many more wins there would be in La-La land.

Well that wraps it up for this week.  Good luck and hopefully it is a solid Week 16 for everyone out there. There will be no more formal column next week (All Star Break) but expect something to appear out of nowhere. Do not forget to follow us @TheProgramBTR for all your fantasy hockey questions and more.  Thanks again for reading.