There are a lot of matchups throughout the National Hockey League that can stake a claim to being the biggest rivalry in the sport, but few draw the national attention, while consistently living up to the hype, as the rivalry between the Washington Capitals and Pittsburgh Penguins. That reputation certainly held true on Sunday afternoon, as Alex Ovechkin picked up three points and helped the Caps get back into the game, but it was Evgeni Malkin hammering home a rebound to win it for Pittsburgh in overtime.

Now, with both teams taking five points apiece from the season series that concluded Sunday, there are several questions that need to be answered in the game’s wake: 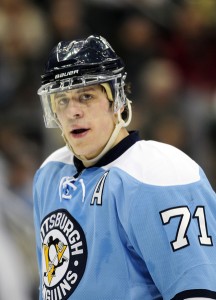 There will be plenty of arguments that the physical fight that both teams showed in the game should be the story. Others will say that the battle between the two biggest Russian superstars in the NHL should take center stage. There will even be those that will argue that the real story were the hits that Ovechkin and Zbynek Michalek doled out. Those stories are all important, but there was an even bigger one that emerged from the game.

The biggest story line that came out of Sunday’s tilt was the never-say-die mentality that both teams showed. The Penguins, dealing with a slew of injuries that would have savagely ended the season for most other NHL clubs, may be blessed to have a guy like Malkin who can still be a top-tier player, but it’s their depth that is winning them games and has them back in the playoff hunt after a six game losing streak. Players like James Neal have also helped matters, and with good news finally taking place with Kris Letang returning to the lineup recently, things are starting to look up again for the Pens.

As for the Capitals, they were down on the mat and largely discounted for a good chunk of the season. They ended up dumping coach Bruce Boudreau and bringing in Dale Hunter, and they were still struggling for a while until a recent surge brought them back into serious playoff contention. Even with an injury to Nicklas Backstrom, they still are able to take advantage of the offensive talent up and down their lineup, and on Sunday, that talent, combined with a great physical presence provided by Troy Brouwer and others, is enough to keep them in any game.

Should Ovechkin or Michalek Hear from Shanahan for Sunday Hits?

In what is unfortunately becoming a common pastime for fans of the NHL, there was plenty of debate surrounding two different hits that occurred in Sunday’s tilt. One of them was perpetrated by Mr. Ovechkin, a frequent contributor to these types of debates, and the other featured Michalek hitting Matt Hendricks.

After the game, Penguins fans (and others in the media, including TSN’s Bob McKenzie and on-site reporter Pierre McGuire) were decrying it as a dirty headshot, and many were calling for NHL suspension czar Brendan Shanahan to take his Shanahammer to Ovechkin for the play.

When you look closely at the video, two things are clear: the first is that Ovechkin blatantly leaves his feet, meaning at the very least that the play should have been ruled a charging penalty, and the other is that the first contact that Alex makes isn’t with Michalek’s head, but rather with his shoulder. The follow through of the hit did appear to hit his head, but it wasn’t the principal point of contact, and that will be looked at closely by Shanahan and company.

Overall, the play should do nothing but perhaps draw a fine for the charging penalty that wasn’t called, and an ultimatum should be issued to Ovechkin: no more leaving your feet, or you will be suspended. It has become ridiculous to watch a player with Ovechkin’s size feel the need to get a head of steam going before hitting someone, especially into the boards, and the league needs to tell him to take it down a notch, or face the consequences.

As for Michalek, you’ll have to go to Joe Yerdon’s piece on the topic over on NBC Sports’ ProHockeyTalk blog, but here is the breakdown: Michalek and Hendricks were skating toward the corner for the puck, and Hendricks was winning the race. Once the two men got to the corner, Hendricks bent down to play the puck, and Michalek put his forearm/elbow into the back of Hendricks’ head, earning himself a two-minute minor for elbowing. Hendricks got up looking no worse for the wear, and the game continued.

Unlike the Ovechkin hit, this play didn’t get a whole lot of debate going on the internet, but it still needs to be discussed and at least looked at by Shanahan. Hitting prone players near the boards is an epidemic in the NHL now, with a slew of suspensions (Daniel Carcillo) and near suspensions (Henrik Zetterberg) resulting from it, and while Michalek’s doesn’t really fit into that camp, it was close enough to warrant some debate.

In the end, it isn’t worthy of a suspension either, as the play wasn’t one of the high speed collisions that nearly always results in injuries, but Michalek still needs to watch himself if he’s in a similar situation in the future. 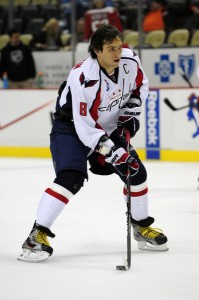 Is Evgeni Malkin the Hart Favorite?

With goals in five straight games, as well as an NHL -leading 55 points, Malkin has taken a leap from afterthought to bonafide star in quick order recently for the Penguins. He looks more engaged than he has at any point this season, and he looks like he is hellbent on carrying his team to the playoffs, even if it means doing everything himself.

The question that his resurgence has brought up is a simple one: is he the class of a field that is going after the MVP award this season? At this point, it has to be said that he is a serious contender, especially with the way he has single-handedly brought the Penguins out of their funk. If that isn’t the definition of “valuable” that the league is looking for, then it’s impossible to determine what it is.

That being said, Malkin is not the front-runner for the award. He has probably leap-frogged Chicago Blackhawks captain Jonathan Toews, but he is still trailing behind the talented Atlantic Division-duo of Philadelphia’s Claude Giroux and New York’s Henrik Lundqvist. Those two have been just as instrumental to the success of their clubs all season long as Malkin has for this last stretch of games, but they both have a better argument than the Russian.

If he can keep up this ridiculous pace and keep Pittsburgh climbing the standings, then things could change, but as of right now, Giroux and Lundqvist are on the top of the heap.

Is Alex Ovechkin Primed for a Monster Second Half?

Ovechkin has been a shadow of his former self for most of this season, and there was a sizable outcry when he was named to the NHL All-Star Game when the reserve rosters were announced recently. His Capitals team was on the verge of being irrelevant in playoff discussions until just a few weeks ago, but he has been showing some signs of life lately, and his team is following suit.

Ovechkin had a great game against the Penguins, working really well with center Mathieu Perreault and fellow winger Alexander Semin, and his goal was the difference maker until Neal scored the tying goal in the third period. He was employing his aggressive physical style as well, and that has to be a good sign for Caps fans who were starting to wonder whether or not their star winger was ever going to recapture his old magic.

Ovie might not be the biggest star in the league anymore, but he is fully capable of going on a scoring binge at any point. With four of their next six games against the defending champion Boston Bruins and their biggest threat in the Southeast Division, the Florida Panthers, now would be as good a time as any for Ovechkin to step up his game. Whether he does or not could be the deciding factor on whether the Caps are back in the discussion as Eastern Conference favorites, or relegated back to also-ran status.

Which Team Has Better Odds to Make Noise in the Playoffs?

Both of these teams were highly touted going into the season, with both clubs getting plenty of love as a potential Stanley Cup Finalist. After going through some adversity and some injuries to key players, both teams are climbing off the canvas and looking to make some noise going forward, but which one of them has the better chance to win a series or two and at least provide the Bruins and Rangers some competition for the Prince of Wales Trophy?

At first blush, it seems like this should be an easy question to answer. The Penguins have Malkin thriving at the moment, Neal having a tremendous season, and a coach in Dan Bylsma who has won a Jack Adams and brought the Pens a Stanley Cup title back in 2009. Meanwhile, the Capitals have a superstar who doesn’t seem to be at the top of his game yet, a midseason regime change that hasn’t borne a lot of positive fruit, and a surging team within their own division that seems determined to thwart their path toward the postseason.

The Caps, however, do have some positives to fall back on. Michal Neuvirth has been largely solid in net this season, and even if he starts struggling again, Tomas Vokoun is more than able to make a comeback. In addition, they should get Backstrom and Mike Green back and healthy at some point, and that will provide a huge boost to the club. If they can hang in there until that happens, then they will be in good shape moving forward.

Even with that, the team with the better odds will rightfully be the Penguins. They can’t count on getting a healthy Sidney Crosby back this year, but Jordan Staal will eventually come back, and when you add a potent weapon like that to an offense that’s clicking, and throw in an All-Star caliber goalie in Marc-Andre Fleury and a solid defense, you’ve got a recipe for success that’s hard to match. Neither team can be called a favorite against either Boston or New York right now, but out of the two, it would have to be Pittsburgh who would be given the better chance.