The Flyers newest marketing campaign for Game 3 against Boston was “Philly Tough.” That’s exactly the opposite of what I saw on the ice for Game 3. I saw no chemistry on the ice. I saw a lackluster power play yet again. I have heard a lot of people in the Delaware Valley defending the Flyers tonight but I can’t see why. Sure, they outshot the Bruins 35-20. Sure, they outhit them 27-20. The bottom line is the Flyers came up short on the scoreboard and I disagree with everyone who thinks they gave Rask all he could handle tonight. I attended the game and I thought they were off to a great start taking advantage of the odd man rush when Asham buried the first goal of the game. However, that lead lasted barely longer than a minute when the Flyers third defensive pairing of Lukas Krajicek and Ryan Parent got stuck on the ice for another long shift and the Bruins scored on a deflection in front. The fact the Flyers outshot Boston means absolutely nothing to me. I did not see Rask make any incredible saves. The Flyers were forced to the outside all night where they would settle for bad angle shots with few rebounds. There was no “Philly Tough” tonight and they didn’t play Flyers hockey. This was not a very physical game after the first few minutes. 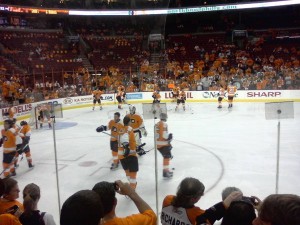 Flyers skate in pre-game warmups prior to Game 3 (J. Johnson/THW)

One of the biggest reasons the Flyers are behind 0-3 in this series is because of the power play. Head coach Peter Laviolette continues to mix the power play units as well as the lines in general around to try to generate some offense. These guys haven’t really had much time to build chemistry with each other. The Flyers first unit tonight had Richards, Briere and Giroux all on the ice at the same time. Arron Asham was getting shifts on the second power play unit. With all due respect to Arron who I thought played decent tonight, would he ever see the ice on a power play unit for any remaining NHL playoff team? No. Injuries are definitely a huge part of this because when your second power play unit is made up of guys who had about 40 points combined during the regular season you know there’s a problem. There is no scoring depth right now. Carter and Gagne are HUGE losses in that department. Scott Hartnell has proven that he gives you absolutely nothing this year. James van Riemsdyk has been non-existent for most of the second half of the season and the playoffs. Peter Laviolette decided to put the 3 guys who have generated all the offense on the same unit so it’s tough to generate any offense other than that unit, although tonight even they didn’t come close to scoring. This suddenly looks like the team we’ve seen all year other than vs. the New Jersey Devils.

Obviously the series is 3-0 and not 4-0 but assuming the Flyers don’t make history they have a lot of work to do this summer on re-working the roster and trying to fit some more scoring in there along with finally strengthening the goaltending. Chemistry has been a huge issue for this team all year. The 3rd defensive pairing was so bad tonight that Peter Laviolette decided to split them up in the 3rd period and they had Krajicek out there with Coburn and Parent playing some shifts with Timonen. I’m not sure what the issue is but obviously this year’s effort is unacceptable to team owner Ed Snider and I know he’s expecting Paul Holmgren to make some changes. This has to be the summer they get a capable goalie. It’s time to stop fooling around on this issue.

ARENA NOTES: It wasn’t all bad tonight (off the ice at least). The highlight of the night was when during a commercial break at the arena they played a new “History Will Be Made” commercial featuring Ian Laperriere with the caption “What if Ian didn’t believe in sacrifice?” The crowd went absolutely nuts for this and when they showed Laperriere on the screen he got a very long and loud standing ovation that you could tell Ian was very touched by. If I see the NHL post it on Facebook I will edit this blog later to include it in this post. 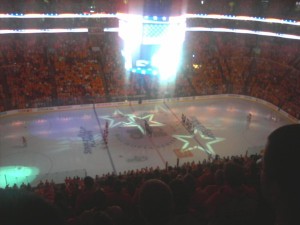 Lauren Hart once again did her duet of “God Bless America” with Kate Smith on the arenavision screen in what has become an every game event. This used to be special and used only when we needed it in critical Game 7’s and other must-win games. However, it seems this is something they do every playoff game now. It’s always special to hear the song and the duet but please Flyers let’s go back to only using it in more desperate situations. I know it seems silly, but the Flyers record when this song was played used to be absolutely ridiculous and it’s now kind of watered down over recent years.

OTHER NOTES: The Broad Street Bullies HBO special debuted on May 4th at 10 PM on HBO. I don’t want to spoil it for anyone but if you haven’t seen it yet check it out. This is a must watch for not only Flyer fans but hockey fans in general. HBO always does a terrific job with their documentaries and this one did not disappoint. The Broad Street Bullies of the 70’s changed hockey and this program goes in depth at giving a look at that team and how it all transpired. It includes interviews with several of the Bullies and their rival opponents over the years.

Thanks for reading. Here’s hoping I’m not back with a series recap for at least a few more games because I know the Flyers are capable of playing much better than this. Enjoy the games everyone.