This past weekend, the New York Rangers sent three players to the NHL All-Star Game that were well deserving of that honor: Henrik Lundqvist, Marian Gaborik, and Dan Girardi. In addition to those three, the Rangers have two other high profile players who have been all-stars in the past: Brad Richards and Marc Staal. Yet, in looking at why the Rangers are in 1st place in the Eastern Conference, one of the biggest reasons is perhaps a player on the roster who isn’t one of the five previously mentioned. He hasn’t been selected to participate in an all-star game in his career, and he hasn’t scored more than 25 goals or 50 points in a single season. However, there is a reason why Ryan Callahan was chosen as the 26th captain in Rangers history before the start of this season, and why he is the perfect captain for this team that has plenty of notable players. 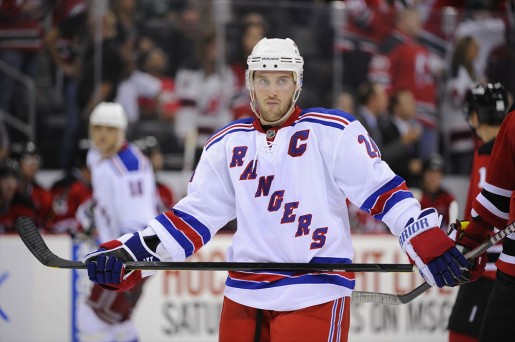 Before John Tortorella’s first full season as Rangers’ head coach began in 2009-10, he talked about establishing a team identity that every player on the roster needed to embrace. And although a large part of that identity comes from the Rangers’ style of play on the ice, a lot of it had to do with players coming through the organization as draft picks, making the NHL roster, and becoming key components of the Rangers’ success. And Callahan fits that mold to a “T”. When Tortorella was asked about Callahan being named captain, he said, “where Cally has gone to, it’s home grown, he’s gone through it and it’s the way it should be done as far as we’re concerned as an organization. He went through the minors, he’s grown, he’s developed, and he’s gained the respect to have this opportunity to be our captain…He fits it, just the way he’s gone about his business.” (New York Daily News)

The Rangers have had many great captains throughout their history, with “The Captain”, Mark Messier as the benchmark for not only Rangers’ captains, but NHL captains. But while Messier was effective with his words in the locker room and then backing it up on the ice, Callahan prefers to let his play do the talking. And his play is inspiring his teammates.

A week ago, Rangers forward Brian Boyle talked about how he looked at Callahan as a role model for his own game. Boyle said, “I want to play like Cally. He plays hard, he plays physical, he finishes his checks and he can score. If won’t happen for me every night but I want to play like him.” (SNY Rangers Blog) Boyle isn’t the only one who models his game after the Rangers’ captain. As an individual, Callahan is known for getting in on the forecheck, hitting, and blocking shots. As a team, the Rangers are known for hitting and blocking shots, and success in both of those categories has undoubtedly contributed to the team’s success. Callahan’s style of play has rubbed off on the team, and the style has now become the norm, creating the team identity that Tortorella wanted to establish when he became head coach.

Flames Looking to Add Another Defenceman

Looking at the Blues’ 2021 Forward Group