Did you work late last night? Did your significant other make you run errands while the game was on? Did your dog chew off your TV cable wires?

Have no fear – THW’s Monica McAlister has your back, covering everything in the hockey world from From Abdelkader to Zuccarello every morning. Check in daily to quickly get up to speed on all things hockey – recaps, storylines, videos and great links.

While You Were Sleeping

Penguins were welcomes home last night by their fans. The fourth game of the regular season was their first on home ice and still without their captain Sidney Crosby on the ice. On the ice however is the only place he isn’t at in Pittsburgh as fans cheered him when he made an appearance at last nights game.

Kicking things off like most teams the Penguins have their own pre game intro video:

The combination of the hometown crowd, the fire up video and taking on a team that was completely re designed over the summer lit a fire with the Penguins last night as Pascal Dupuis scored his first of the season late in the first to give Pittsburgh the first lead of the game – and they never looked back.

Matt Cooke scored his third of the season little over halfway through the second only to have Florida’s Marcel Goc cut the lead in half less than a minute later.

A penalty to Cooke for interference would lead to a short handed goal by Penguins Richard Park for this first of the season making its 3-1 heading into the second intermission.

Minutes into the third it would be Tomas Fleischmann with a snap shot to bring the Panthers within one only for James Neal to add an insurance goal a few minutes later for the Penguins.

Jose Theodore stopped 18 of the 21 shots he faced in net for Florida while Marc-Andre Fleury took the league lead in wins with three stopping 26 of the 28 shots he faced. 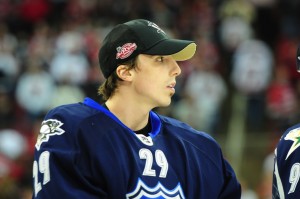 It is transtion time in both Ottawa and Minnesota. Both teams are undergoing coaching changes, philosophy changes, drills, line ups… change is good right?

Well the Minnesota Wild came out and won their first game – Ottawa lost theirs to Detroit.

Then they both lost their second game.

Now the Wild lost and Ottawa won. No one said change was easy.

Last night the Senators had their home opener in Ottawa and saw the home team fall 2-0 in the first to the Wild as Kyle Brodziak tipped-in a shot and Devin Setoguchi got a power play goal.

It was Nick Foligno that cut the lead in half – nearly halfway though the second period as he put a wrist shot past Niklas Backstrom.

Nick Johnson would give the Wild a two goal lead less than two minutes into the third only to have Ottawa erase it minutes letter with goals from Chris Neil and Colin Greening.

In the first three games of the season Ottawa has been that third period team you have to watch out for.

The game headed into overtime and then the shootout where Milan Michalek, Jason Spezza, and Daniel Alfredsson all scored for Ottawa.

Even after giving up all three shots in the shootout Minnesota goalie Niklas Backstrom was the first star of the night with a 0.932 save percentage as he only allowed in 41 of 44 shots during play.

Up into the Netting

The Sporting News Jesse Spector takes a look at the learning curve for this years Hurricanes including rookie Justin Faulk.

Down Goes Brown: Thinking outside the box: Strategic shifts from the NHL’s opening weekend.

Malkin, Cooke, and power play teams show their worth in Pittsburgh on early season road trip.

Hockey fans remember the annoyance of the NHL lockout well now basketball fans are feeling that pinch. One basketball fan has decided to turn to hockey and has launched his site Caps Basketball in efforts to reach out to other new hockey fans as they try to learn the game and players. Guess the NBA lockout turned at least one Wizards fan into a Caps fan.