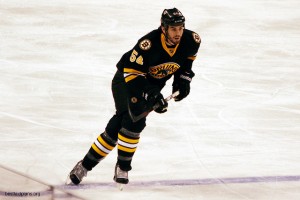 Two weeks ago, it was billed as the marquee game of the year. A re-match, they’d call it, between last year’s Stanley Cup Final participants, the Boston Bruins and Vancouver Canucks. Though that tilt somewhat lived up to the hype, little did everyone know what type of a game they would be in store for when the two heavyweights of the Eastern Conference, the Bruins and the New York Rangers, clashed just 14 days later.

Saturday’s game between the Rangers and Bruins may have, in fact, had it all: highlight reel saves, tremendous goals, a fight and a game winner just seconds before what could have been a shootout. Maybe it wasn’t the end result Bruins’ fans were looking for when Marian Gaborik smashed home a rebound past Tuukka Rask with three seconds remaining in overtime, but it certainly was a glimpse at what playoff hockey between the two teams could offer come May.

“Anybody who doesn’t think we played well tonight needs to reevaluate the way he looks at the game of hockey,” said Bruins coach Claude Julien in his post-game conference.

Before Gaborik’s shot got past Rask, the Bruins netminder displayed two of his flashiest saves of the game–a barrel roll stop on Ryan Callahan’s attempt, followed by a blocker stop on Brad Richards while down on the ice.

“It’s two rebounds,” said Rask after the game. “It hit my glove twice, but what sucks even more is, like, three seconds. Somebody liked it, I guess. I mean, it was a pretty thrilling end. Not for me though.”

Rask finished with 30 saves and the loss, his first since December 6 against the Winnipeg Jets.

“We had our opportunities and power play, couldn’t score, and then they had them,” said Rask. “It was kind of a pretty even game, scoring chance-wise, but I think we, especially in the third, we had better legs and really took it to them but couldn’t get that goal.

“And overtime, as always, anything can happen.”

The goals from the Bruins came from unlikely sources. The first, a gorgeous dangle from Andrew Ference who rushed down the slot with the play and the second, coming off a blistering slap-shot from Adam McQuaid on the point. It was Ference, however, who later put the Bruins a man-down the remainder of the overtime after a charging penalty, when he boarded Ryan McDonagh after a rush down the ice.

“It was a player chasing the puck, and when he did get hit, his legs were pretty far apart,” said Julien. “There wasn’t a good balance from their player and [it] certainly resulted in an unfortunate thing. We’ll let the league look at it. They dissect things in their own way, and we’ll just wait to hear from them.”

Though a combination of speed and momentum clearly contributed to the severity of the hit, Julien chose to speak on how Ference isn’t known as a dirty play.

“There was no intent to injure there,” said Julien. “We don’t like to see that and it’s unfortunate. You don’t want to see a player get injured and it made for an unfortunate ending to a great game.

“(Ference) is not a dirty player. He’s one of those players who supports what the league is trying to do.”

Of course, there were plenty of deficiencies from both teams. From the Rangers, the amount of odd-man rushes allowed showed just how vulnerable their defense could be while the Bruins’ inability to capitalize on the power-play showed continued weakness in an important area. Still, the top two teams in the Eastern Conference put on a display that furthered that distinction.

“It was a great game played by both teams,” said Julien. “It’s certainly what the league is looking for.”