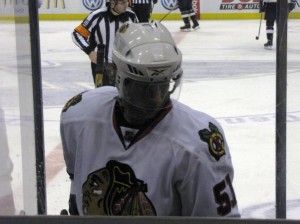 Brian Campbell led the Panthers to victory with two assists.

What did we learn about the Panthers in their opening night win against the New York Islanders? We learned quite a lot actually, and the majority of it was positive. Here are some of my takeaways.

As I discussed in last week’s post previewing the game against the Islanders, Jose Theodore will have to play well if the Panthers are to surprise most pundits with a successful 2011-2012 campaign. Last year’s starter, Tomas Vokoun, enjoyed a strong season with a 2.55 GAA and .922 SV%. Well, Theodore is off to a great start. He notched his 31st career shutout and continued his strong career play against the Islanders. Theodore was not tested much, but he did show great play when it was needed. In particular, he was strong on the Panthers’ three penalty kill opportunities. All in all, a great start for the new netminder.

New defenseman Brian Campbell was my favorite player to watch on Saturday night. It was refreshing and exciting to see a Panthers defenseman who can control the puck in the offensive zone and create scoring opportunities while also playing strong defense. He was all over the ice as he notched two assists and accumulated 30:04 minutes of ice time, including 6:29 minutes on the power play and 2:36 minutes on the penalty kill. Erik Gudbranson was also fun to watch. He was strong and assertive with the puck and with his checking. Nice to see a young guy play well. Dmitry Kulikov also had a nice game. He had a good offseason in which he put on 10 pounds of muscle, and it showed. His checks were strong, and he was great on the puck. I was very impressed to see the time he logged on the power play as well as Campbell’s mate on the first line. After Campbell, Kulikov had the next most time on the power play at 5:43 minutes. Finally, Jason Garrison also had a nice game. Obviously, his wrister at the end of the first period was a laser and gave the Panthers a 2-0 lead that they would not relinquish. He also was great in a pairing with Campbell, and the two defenseman will surely continue to provide offense.

I was not overly impressed with the forwards. One player I did enjoy watching was Jack Skille. He had great speed throughout the game and could really move the puck on his stick. Kris Versteeg was disappointing in the opener, and David Booth’s name also was not called often. Besides his workman-like goal in the first period, Stephen Weiss had a quiet game as well. I liked Marcel Goc’s toughness and puckhandling, and I also liked Tomas Kopecky. Overall, I think that more is expected from this group. After the first period, there weren’t many great scoring opportunities, but I think that one positive aspect of the game is that the forwards were constantly moving and hustling. Last year, the offense was bland and not creative. On Saturday, the forwards were showing speed and initiative, so hopefully, they can just put together a few more good opportunities.

Yes! A power play goal for the Panthers! The cynic in me was not overly impressed with the power play goal because it was a wrister in a 5-3 situation. The goal did not come from great puck movement, skilled stick handling, or speed, but it was still a goal. In fact, it was a great shot, and David Booth did a fantastic job screening Isles goalie Al Montoya. Thus, it is something to be happy about, but there is still work to be done. A telling statistic is that the Panthers only had 4 shots on goal during their 5 power play opportunities while the Islanders had 6 during their 3 power play opportunities.

I think what I enjoyed the most on Saturday was the Panthers ability to get two points in a situation where those points were very attainable. We don’t yet know what we have in the 2011-2012 Panthers, but we do know that they should have been able to compete with the Islanders. Most importantly from Saturday, they did compete, and they clearly looked like the better team. Saturday may be the only game the Islanders were going to sell out all year, yet the Panthers came in with a largely new group of players, played tough and fast, and left with two important points. Beating the teams that you’re supposed to beat is what a playoff team is supposed to do.