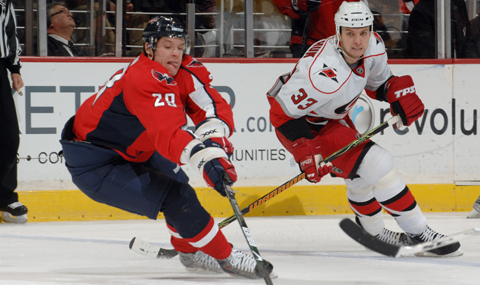 All this for the chance to get their behinds handed to them in the first round by the Boston Bruins? It hardly seems worth it, doesn’t it?

Well, don’t tell that to fans of the Carolina Hurricanes, Buffalo Sabres, or Pittsburgh Penguins. That 8-seed is the magic ticket for the Hurricanes, who haven’t sniffed the playoffs in two seasons, the championship-starved Sabres and the drunk-off-recent-success Penguins. The Hurricanes took a step forward and a step back this weekend after a miserable, late loss to the lowly Atlanta Thrashers and a win over the dazzling – but slumping – Washington Capitals.

On Saturday, the ‘Canes were helpless to stop a four-goal comeback win from the Thrashers, who were riding a great one-man effort by Ilya Kovalchuk. Tim Gleason took a pointless, blatant penalty with three minutes remaining in the game, and the ‘Canes almost killed it. However, the Thrashers pounced and the ‘Canes couldn’t tie it up with the man advantage, marking the third time this season that the ‘Canes went down to the bottom-dwelling Thrashers. It was difficult to believe that was the the Carolina same team that beat San Jose early last month.

The ‘Canes were not about to let another late lead – or two points – get away from them against Washington. Of course, there will only be one goal that anyone is talking about, and it won’t be any of the five the Hurricanes’ scored on their Southeast division-leading foes; it will be Alexander Semin’s goal from well out on his knees that brought the score to 5-1. However, the ‘Canes forwent the silky moves and got the edge where it really mattered, winning the game 5-2. Carolina leapfrogged over Buffalo, though the Sabres have two games in hand, for ninth place but couldn’t slip into a playoff spot as two of its playoff rivals polished off the rest of the Southeast Division tonight. The Panthers defeated the Thrashers, 4-2, and the Penguins made quick work of the Lightning, 3-1. Sean Avery and Co. (strange to read? Even weirder to write!) won’t be in action until Thursday against the Islanders.

Though he can’t seem to convert on breakaways or in the shootout, Eric Staal started the scoring with a goal on a penalty shot with a minute remaining in the first period. Staal was hauled down by Washington’s Shaone Morrisonn and came up with a deke then a glove side shot when he went mono-a-mono with Michal Neuvirth.

No doubt about it, Staal has had an off season. He has 50 points in 65 games so far, which is not what the ‘Canes brass was expecting when they signed him to a massive contract this summer. One can point to his hefty, 300+ game ironman streak (Staal has missed one game in his entire career, and that was during his rookie season) but, simply put, there are some games this season where he has not shown up. And as goes Staal, so go the Hurricanes. For those who think Staal is not the center of this franchise, look at this: the team is 17-2-1 when the assistant captain scores. That is impressive.

Back to the game summary. After the period break, the short-handed party began. By the end of the second period, ‘Canes players listening on the radio were begging, “C’mon, ‘Canes! Take another penalty, please!” Matt Cullen has cooled off recently, but he picked up the pace again with three points through the game, the first of which was a stunner of a shortie. After Joni Pitkanen boarded Semin and received an all-expenses-paid trip to the “sin bin,” as radio announcer Chuck Kaiton called it, Gleason sprung Cullen on a breakaway with Chad LaRose. Cullen carried it all the way out of his own end, then opted to follow Staal’s lead and shoot glove side. The puck whizzed past Neuvirth.

Patrick Eaves next showed why the Hurricanes should not try and pawn him off at the trade deadline with a short-hander of his own. Eaves played keepaway with a Capitals player and sent a puck clanging around the goalposts for his fourth of the season. He later followed that with a power play goal toward the end of the second period. In between Eaves’ two tallies, Chad LaRose scored one of his own after he was the recipient of a fortuitous Ray Whitney rebound after “The Wizard” made some impressive moves on Neuvirth.

The last time the Hurricanes scored two shorties in one game was in 2005 against the Capitals when Kevyn Adams and the aforementioned LaRose scored on the same man disadvantage.

Sergei Fedorov scored in the final minutes (and, according to Kaiton, the Caps’ goal celebration was quite enthusiastic…puzzling…) and the ‘Canes took the win back to Raleigh with them, capping off a weekend where they beat and lost to the wrong opponents. Story of this season.

Now, let the trade deadline commence. Rutherford has been quoted as saying that the ‘Canes are not looking to make noise tomorrow (le sigh…that entire last blog was a total waste, then?) but has also been saying for a while now the ‘Canes could both use another offensive D-man and a steady, scoring winger. Anton Babchuk, fresh off a three-game goal-scoring streak, has surprisingly filled the former role nicely, and with Jussi Jokinen out at least a week due to the death of his father but Scotty Walker rushing in to take his place, perhaps Rutherford’s trigger finger won’t budge.

Happy web surfing, hockey fans. I hope you get everyone you want without giving up the guy on the back of your jersey.