We all know the Philadelphia chapter of the Michael Leighton story and how he was run out of town, doomed to spend his two-year contract with the Flyers’ minor league affiliate 55 miles north of Albany, New York.  But earlier this week Leighton added to the next chapter of his career with the Adirondack Phantoms, as he was selected – by fan voting – as the starting goaltender for the Eastern Conference in the AHL All-Star Game on Monday Jan. 29 in Atlantic City.  Part of the reason Leighton is starting in the All-Star Game might be attributed to the event’s proximity to the city of Philadelphia, as Atlantic City is only about 60 miles from the home of the orange and black.  It certainly might have helped him earn votes.

Back in Philadelphia, Sergei Bobrovsky and Ilya Bryzgalov are trying to do their best to create another goaltending controversy in between the pipes.  During the entire rollercoaster ride in the NHL, Leighton has continued to make the most out of his stint with Phantoms.  For much of the season he has remained consistent, unlike his NHL counterparts which begs the question of whether or not we will see the 30-year-old don the Flyers orange and black before the season is finished. 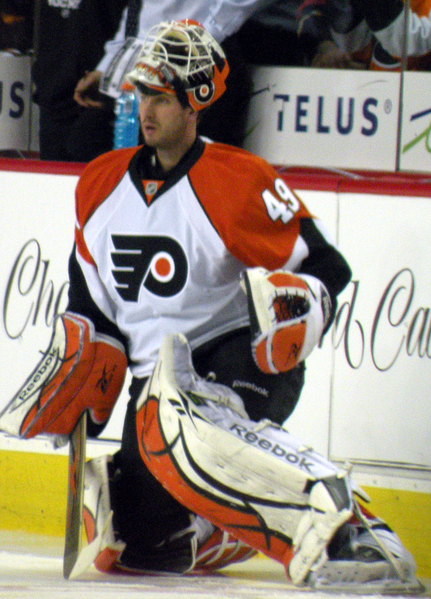 Before you start laughing, don’t forget that recently rumors have been swirling around the Flyers and the potential need to sign yet another goaltender before the trade deadline, though it is completely unlikely given the potential talent and the amount of money already invested in the crease.  Bryzgalov – the 51 million-dollar man – has a “humongous big” 2.99 goals-against-average, to go along with his 18-10-4 record this season and despite the fact that the 31-year-old has had glimpses of the greatness that made him a household name in Phoenix, he just has not been able to come up with the big saves when the Flyers need it most.

Bobrovsky, on the other hand, is 11-4-1 with a 2.42 goals-against and a slightly better save percentage.  He has played well recently – even earning the Flyers’ first shootout win of the season – making a legitimate case that he deserves to be the everyday guy, while leaving coach Peter Laviolette with a difficult decision as to who is the number one goaltender.  But last year Bobrovsky had a tough time carrying the load but could this season be a different story?

The same could be said about Leighton, however.

Leighton – who has pretty much been a career backup in the NHL – has played well for the Phantoms through the unofficial midway point of the season and it could prove he is ready to return to Philadelphia if anything happens to the Russian duo.  If one of the two were to sustain an injury, Leighton could come up and be a serviceable second guy on the depth chart and though the horrible Patrick Kane-like goals would still occur, the hope of him once again catching lightning in a bottle like he did during 2010 would help take the pressure off the starter.  He has never played more than 40 games at the NHL level and even though he has played 29 games with the Phantoms – posting a 14-14-0 record with a 2.64 goals-against-average – there’s a little less pressure at the minor league level.  That’s close to the middle of the pack in the AHL and are clearly not as good as the Eastern Conference’s other two All-Star goalies – Tyson Sexsmith and Jeff Zatkoff.

Leighton can now cross an AHL outdoor game and starting the AHL All-Star game off of his resume but when spring comes around will he remain with the Phantoms in the hopes of leading the team to their first Calder Cup since the team’s move in 2009, or will he get one last shot to win the Stanley Cup with the Flyers?