Every season, hockey fans tune into NHL trade deadline coverage eager with anticipation. If their team is a contender, they hope to hear news that they’ve acquired a difference maker. If their team has surrendered hope of making the playoffs, the trade deadline brings hope to fans that the general manager of their favorite team can squeeze future assets out of current talent. The Anaheim Ducks have made several influential trades on or near the NHL trade deadline in their history. Not all of them have been “eye-openers” at first glance, but they have had important and lasting impacts on the Ducks’ legacy.

On the day before the 2008-09 NHL trade deadline, the Ducks sent Kent Huskins and Travis Moen to the San Jose Sharks for goaltender Timo Pielmeier and center Nick Bonino. While this trade got them a strong player in Bonino — he played five seasons for the Ducks scoring a career-high 22 goals in 2013-14 — it’s the trade that this move enabled which is the important part.

Five years after the trade for Bonino, they sent him to the Vancouver Canucks along with a first and third-round draft pick in 2014 and Luca Sbisa for Ryan Kesler and a 2015 third-round pick. Shortly after the trade, Canucks general manager Jim Benning told the media, “Bonino was an important piece. Ryan scored 25 goals for us last year. [Bonino] scored 22 goals last year, so being able to replace [Kesler’s] goal production for our team next year and he can play the power play and he’s a playmaking center iceman, I thought that was important.” 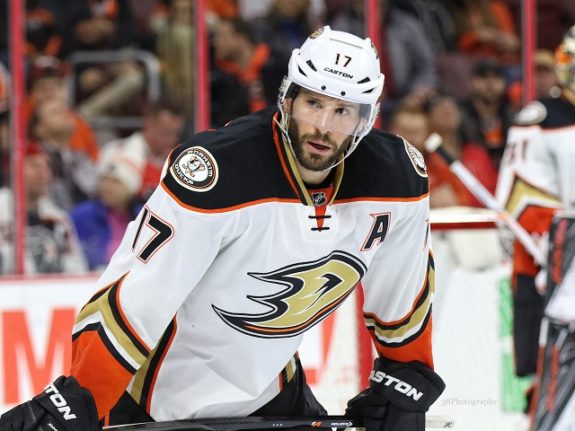 Kesler was a vital piece to the Ducks until 2017. Recovery from hip surgery has proven difficult and limited his availability and performance. At 34 years old, Kesler has six points through 42 games this season, but it’s always easier to criticize a trade in hindsight. At the time, the Ducks were looking for a strong, physical second-line center who could counter their rival, the Los Angeles Kings. The Kings had just won their second Stanley Cup in three seasons and had taken out Anaheim along the way. The Ducks got their man in Kesler.

On trade deadline day 2003, the then-Mighty Ducks acquired Rob Niedermayer in exchange for sending Mike Commodore and Jean-Francois Damphousse to the Calgary Flames. The trade landed them an important piece in their success from 2002-03 to their Stanley Cup title in 2006-07 and beyond.

In Damphousse, Bryan Murray, Anaheim’s GM at the time, gave up a goalie who had been a former first-round pick but only played in six NHL games for the New Jersey Devils in 2001-02. In Commodore, they gave up a big physical defenseman who had played 57 NHL games but none for the Mighty Ducks.

In Niedermayer, the Mighty Ducks received a player who had once notched 26 goals and would become one-third of their “shutdown line” along with Travis Moen and Samuel Pahlsson. By the time the team dropped the “Mighty” and became just “the Ducks,” Niedermayer and his shutdown line played a key role in the Ducks’ Stanley Cup title. Niedermayer’s 10 points in 21 playoff games tied his career high in playoff points.

It wasn’t just his on-ice presence that helped the Ducks become the first California team to win the Stanley Cup, he also helped bring his Norris Trophy-winning brother Scott Niedermayer to the Ducks. At the time of Scott Niedermayer’s signing in 2005, his agent Kevin Epp told the press, “I think it was a big factor. Playing with Rob, the West Coast, closer to family. A little bit of everything.”

One year and 10 months later, the Ducks won the Stanley Cup and Scott Niedermayer won the Conn Smythe.

In more ways than one, they have Rob Niedermayer to thank.

It’s the day die-hard Ducks fans choose to forget. Just over a week before the 2001 trade deadline, the Mighty Ducks dealt franchise legend Teemu Selanne to the San Jose Sharks. During his first stint with the Mighty Ducks, Selanne scored 234 goals. Along with Paul Kariya, Selanne helped lead Anaheim to its first-ever playoff appearance.

After a disappointing first half of the 2000-01 season, the Mighty Ducks tried to get something in return for Selanne who was to become a free agent after the following season.

In return for Selanne, Anaheim received left winger Jeff Friesen and goalie Steve Shields from the Sharks. More importantly, they received a 2003 second-round draft pick. On draft day in 2003, Murray packaged that pick with their other second-round pick in that same draft and sent it to the Dallas Stars in exchange for Dallas’ 2003 first-round pick. That pick became Corey Perry. 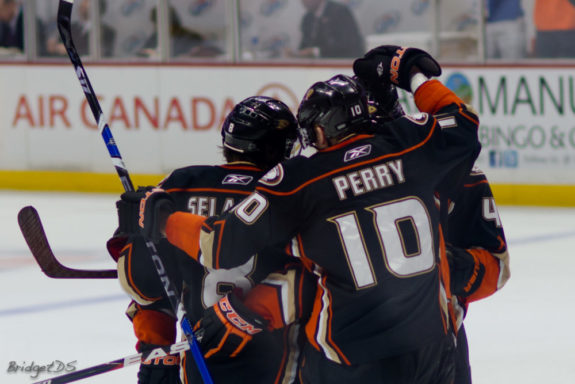 Without the Teemu Selanne trade in 2001, Corey Perry might never have been drafted by the Ducks. (Bridget Samuels/Flickr)

The icing on the cake is that Selanne returned in 2005 to team up with Perry and the rest of the Ducks to win a Stanley Cup title and played alongside Perry on the Ducks’ first line later in his career.

This trade, made two weeks before the deadline, also doesn’t have the immediate impact you might expect for an important deadline trade, but it led to one of the biggest trades in Ducks history. The process that led to its eventual payoff lasted over four seasons and spanned the tenures of four Ducks GMs.

Following the 2001-02 season, the Mighty Ducks fired Gauthier and hired Bryan Murray. On draft day in 2002, Murray traded the third-round pick Gauthier had acquired for McInnis to the Nashville Predators in exchange for them agreeing not to select Joffrey Lupul in that same draft.

The Mighty Ducks drafted Lupul, who played 172 games in his first stint with the team and scored 41 goals. He added nine goals and two assists for 11 total points in the 2005-06 NHL playoffs, but it was after that season where he had his biggest impact.

The Final Step To Pronger and the Cup

On July 3, 2006, Sean Burke, who had just started his second year as Anaheim’s GM, packaged Lupul in a massive trade to the Edmonton Oilers to land star defenseman Chris Pronger. Along with Pronger, the trade included Ladislav Smid, the Ducks’ 2007 first-round pick, along with their 2008 second-round pick. It also included a conditional first-round pick if the Ducks made the 2007 Stanley Cup Final, which they not only made, but won, thanks, in part, to Pronger. 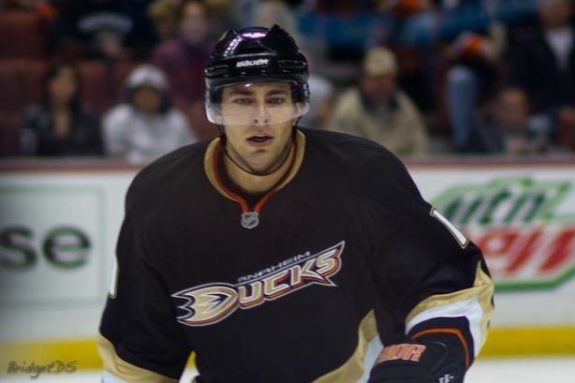 Pronger had forced Oilers’ GM Kevin Lowe’s hand by demanding a trade because his wife struggled with the prospects of life in Edmonton, even after the Oilers had made it to the Stanley Cup Final.

Lowe needed a big return for Pronger, who was still under contract for five more seasons. In Lupul, the Oilers received a young and promising player who had led the then, Mighty Ducks in playoff goals and tied for third in points with 11. The Oilers had seen Lupul up close when they defeated the Mighty Ducks in the 2005-06 Western Conference Final.

In a piece for the Edmonton Journal David Staples explained Lupul’s value in the trade.

“Pronger had been a long-term fix for the Oilers, so Lowe needed something long-term in return — players who appeared to be on the brink of NHL stardom, but were far from their unrestricted free agency years, which kick in after a player’s seventh pro season.” (from ‘The Kevin Lowe Reader, Part 3: Lowe and his struggle with Chris Pronger’ The Edmonton Journal — 6/12/14)

Pronger teamed up with Scott Niedermayer as the Ducks’ first defense pairing. During the 2006-07 cup run, Pronger ranked first among Anaheim defensemen with 15 points and tied for third overall on the team in playoff scoring.

While the original trade wasn’t made as a conscious decision to eventually land Pronger, it was a “butterfly effect trade.” When a third-round pick flapped its wings out of Boston in 2002, it blew a Stanley Cup hurricane into Anaheim four seasons later.

On Feb. 28, 2011, trade deadline day, Ducks GM Bob Murray traded Maxim Lapierre and MacGregor Sharp to the Canucks for Joel Perrault and a 2012 third-round pick. Perrault never played a game for Anaheim but at the 2012 draft, Murray used the third-round pick to select Frederik Andersen.

Anderson played well in three seasons and 153 games with the Ducks, but thanks to the emergence of John Gibson, who had been drafted a year before Andersen, Anaheim could use him as an asset. So, four days before the 2016 NHL draft, Murray traded Andersen to the Toronto Maple Leafs. In return for Andersen, the Ducks received a 2016 first-round pick and a 2017 second-round pick.

With the 2016 pick, Murray selected Sam Steel and with the 2017 pick, he chose Maxime Comtois. While it’s obviously far too early to judge the impact of Comtois and Steel, fans hope early signs of success blossom into stardom for Anaheim’s next Stanley Cup run. 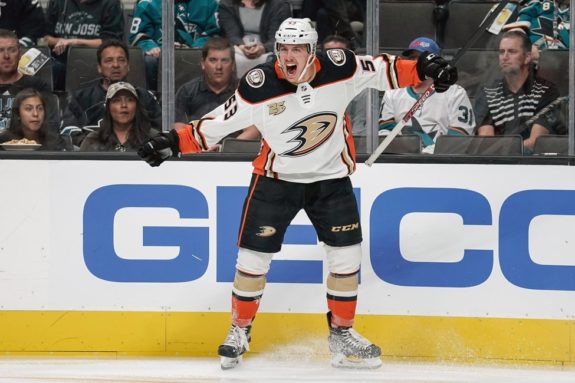 While not all of these trades were startling when they happened, they had major implications for the Ducks’ future success. It goes to show that even a minor transaction near the trade deadline can snowball into a historical moment and that a devastating one can have a silver lining. It’s part of the reason fans love trade deadline day so much.

All stats and trade history from nhltradetracker.com and hockey-reference.com