The Washington Capitals had no trouble climbing to the top of the NHL standings. While many attribute that to Alex Ovechkin, Nicklas Backstrom and the rest of the team’s offensive arsenal, they’ve also acknowledged the biggest part of the Capitals franchise: the goaltender.

Braden Holtby, who just five years ago was playing with the Hershey Bears and looking for his big break, has been the backbone of the team over the last few years. The 27-year-old shined during the 2012 Stanley Cup Playoffs and has since emerged into one of the league’s most elite goaltenders.

However, it took time for the 2016 Vezina Trophy winner to evolve into the player he is today. While a lot of his game has been attributed to his confidence and ability, all of that would be impossible without the team’s goalie coach, Mitch Korn. 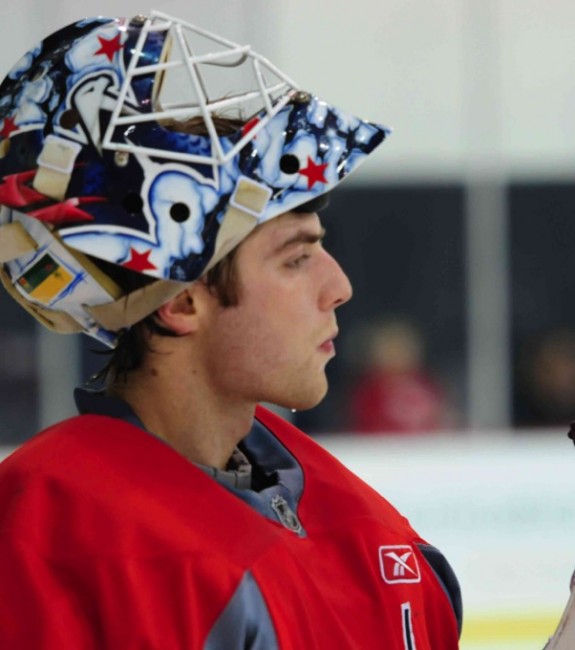 After Washington failed to make the playoffs for the first time in seven years following the 2013-14 season, the Caps decided they had to make a change. Not only did they purge their front office, but they made significant changes to their coaching staff. One of these changes included hiring Mitch Korn.

The former Predators goaltending coach is known as the “goalie whisperer.” His technique is unorthodox, and he has set the standard for the NHL over time. For instance, he is credited with starting the trend of training with medicine balls in the offseason.

I’m kind of creative by nature. I think outside the box maybe because having not played in the League gives me a different perspective, I think. I do camps all summer long, and all those camps, I work with lots of young guys that we have great conversations about what-ifs… you get these fresh perspectives that are outside this environment and, you know, it’s easy to get smothered in the NHL and get so locked into that.

In addition to his fresh take on goaltending development, Korn is also close with his goaltenders. He acts as an approachable coach, and always finds constructive, open ways to help his goalies improve. By the same token, he is always available and keeps a close relationship with the netminders he trains. In fact, Ben Vanderklok, the Predators’ goaltending coach who served as Korn’s assistant in Nashville, told Bleacher Report that Korn “cares about his players like they’re his own kids.”

Korn was the one to transformed Holtby into the “beast” he is today. He effectively formed a close bond with him and introduced him to new training methods, ones that included a visit to an optometrist to work on his vision and use of his pupils. After that, Korn showed Holtby how to regain his confidence and step into a big role, especially after his lackluster performance led to reduced ice time in the team’s forgettable 2013-14 campaign.

Ever since the days of Semyon Varlamov looking to steal Jose Theodore’s starting job, the Capitals have been excellent when it comes to finding excellent goaltenders. Holtby is one of the biggest steals of the 2008 NHL Entry Draft and Philipp Grubauer was a wise selection for the Capitals in 2010.

It appears that the team has no problem finding quality netminders, let alone top prospects. And even when they appear to suffer setbacks, the goaltenders within the organization showcase confidence and maturity as they try to take the next step forward.

This is evident with Philipp Grubauer, who went late in the draft and suffered setbacks throughout development camp. Grubauer, now one of the top backup goaltenders in the NHL, had a long road to get where he is today. He made the most of his time in the ECHL, playing with the South Carolina Stingrays. Though he seemed to struggle at times, he made the most of his playing time, making headlines and proving his full potential. 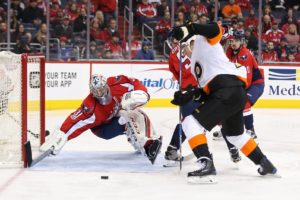 In Grubauer’s 2011-12 campaign with South Carolina, he posted a 2.22 GAA through 43 games and was the ECHL’s goalie of the month in November and rookie of the month in January. Through all of his hard work, he displayed incredible stamina and ability between the pipes and worked his way toward a well-deserved promotion to the Hershey Bears. This, of course, was the same path fellow teammate Holtby took on his road to the big leagues.

Simply seeing how Washington has come to scout goaltenders shows that they can mold any netminder into the type of player they want: an athletic, quick goaltender with excellent vision for the puck. Management through the years has been incredible when it comes to finding these players, and even better when it comes to putting them on the right development path.

Over time, it is clear that the Caps have taken one of the most important steps in their run toward the Stanley Cup: They are one of the only teams in the NHL that has an outstanding arsenal of goaltenders. By the same token, they have a remarkable duo right now, which makes them one of the more fortunate franchises.