The last time that the Carolina Hurricanes made the NHL playoffs was the 2008-2009 campaign. It looks more likely every day that the trend of missing the playoffs will continue. They sit dead last in the Eastern Conference and have played more games than anyone in the East besides Ottawa. The Hurricanes need offensive help and this may be the draft to get that. The only player that’s even close to a point-per-game pace is Jeff Skinner, who is scoring 0.77 points-per-game.

The Hurricanes have a few pieces that would demand a good return in a trade. Tuomo Ruutu, who is slated to become an unrestricted free agent this summer, seems to be the most obvious candidate for a trade. He would be a great addition to any contender. He’s a hard-working winger that plays with an edge to his game. If the Hurricanes were to trade Ruutu, they would want a combination of picks and prospects in return.

Joni Pitkanen is another player that the Hurricanes could look to move. The demand for an offensive minded, puck moving defenseman is high around the NHL, and Pitkanen is exactly that. He logs huge minutes for the Hurricanes which is an important aspect to any defenseman’s game. If the Hurricanes are to trade Pitkanen they will want nothing less than a first round pick in return, as he is a valuable part to their back-end. Although Pitkanen is seen as an offensive defenseman, he is no slouch in his own zone.

The 2012 NHL Entry Draft is looking like one of these deepest drafts in quite some time. If the Hurricanes continue to struggle this year, selling their veterans and pending UFAs for picks seems to be a viable option. With game-breaking talents such as Nail Yakupov and Mikhail Grigorenko, a rebuild could be sped up drastically. If the Hurricanes acquire enough picks at the deadline, a trade into the top 3 would be a smart decision. They lack offensive depth beyond Staal and Skinner, and one of Yakupov or Grigorenko could fill that glaring hole on the roster.

The next month will be very telling for the Hurricanes. If the Hurricanes want to have any shot at the playoffs this year they need Cam Ward and Eric Staal to catch fire in the second half of this season. Eric Staal has been mediocre this year and that just isn’t good enough for the franchise center. Jussi Jokinen is another player that needs to step up for the rest of the season. 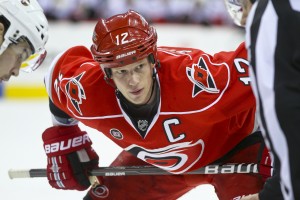 Carolina lacks secondary scoring right now and the last couple years Jokinen has been the one who has helped provide that. With 27 points in 48 games, the left winger simply has to be better. If they continue to slide, they will be sellers come the February 27th trade deadline. However, if they heat up Jim Rutherford will have some decisions to make as to whether or not he believes they have a legitimate chance at a playoff spot.