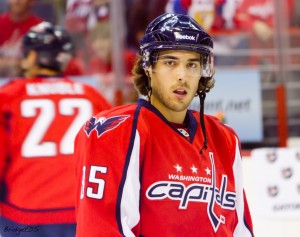 The young Mathieu Perreault has a golden opportunity in front of him. (BridgetDS/Flickr)

Losing your number-one center is never an easy pill to swallow. In their first game of the 2012 calendar year, the Washington Capitals lost Nicklas Backstrom to a head injury as a result of an illegal hit from then Calgary Flames left winger Rene Bourque and a week later was placed on injured reserve.

When an injury of that magnitude occurs, the team is forced to look up and down its roster for a suitable replacement. Head coach Dale Hunter surveyed and decided to give 24-year-old Quebec native Mathieu Perreault a chance.

Scratched for periods of time since the end of December and sensing his team needed tweaking, coach Hunter inserted Perreault into the lineup for their game against the Montreal Canadiens on Jan 18 and scored his first goal since Oct. 22 vs. Detroit, notching his second game-winner of his NHL career in a 3-0 victory.

Perreault found himself on the first line on Jan 22 in a game against the Pittsburgh Penguins, notching two assists playing along side Alexander Semin and Capitals superstar Alex Ovechkin. Coach Hunter told Stephen Whyno of the Washington Times his reasoning for Perreault’s promotion from obscurity to the spotlight:

In the team’s next game against the defending champion Boston Bruins, Perreault maintained his position on the top line but received new wingers due to Ovechkin’s three-game suspension, this time playing with Semin and 21-year-old sophomore Swede Marcus Johansson. The new configuration proved to be the right move as Perreault notched his first career NHL hat trick in a 5-3 victory. Afterwards, he received an unexpected surprise from the team’s suspended captain:

Realizing the opportunity in front of him, Mathieu Perreault knows more than ever the need to make an impact in whatever position he’s placed in and the minutes he receives as he spoke to Katie Carrera of the Capitals Insider after the 5-3 victory:

“I’ve just got to keep doing my thing and work hard. And obviously when you get more minutes, it’s always easier,” Perreault said. “When I get hot, I get more minutes, obviously. I’m just trying to get off to good starts and I can keep getting more ice time in games.”

Since being inserted back into the lineup, Perreault has scored six points (four goals, two assists) in just 13:56 of average ice-time.

Perreault’s junior hockey career indicates the scoring potential the young center possess. From 2006-2008 for the Acadie-Bathurst Titan in the QMJHL, he recorded 119 and 114 point seasons, respectively. Minor league scoring dominance doesn’t always translate to the NHL but a player still needs tremendous skill to score 100 points in a season.

The Capitals may be tied for the Southeast Division lead with the Florida Panthers at 55 points but they’re just as close to being out of the playoff picture. Both the New Jersey Devils and Toronto Maple Leafs have 55 points and the Winnipeg Jets, sitting 10th in the East, are at 50 points. The club is treading water at the moment with its number one center out for an indefinite time and is 5-3-1 in his absence. However, if Mathieu Perreault can continue to excel with the opportunity he’s been given, it could be the boost the Capitals need until their team gets healthy again.