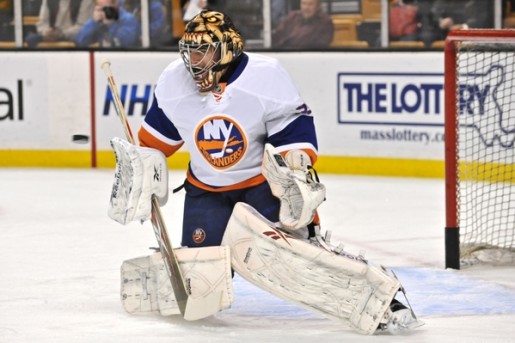 A prelude to the evening’s events began to unfold half way through the first period of last nights home and home series finale between the Toronto Maple Leafs and the New York Islanders. With his team already trailing 1-0 after John Tavares notched his 20th goal of the season, Mikhail Grabovski took a pass from Joey Crabb, crossed the blueline and fired the puck towards a glistening, empty net. Goaltender Al Montoya had fallen down to the ice as he moved to the top of his crease to challenge Grabovksi’s shot. Somehow, perhaps through a sheer moment of surprise, Grabovski managed to force the puck high, over the crossbar, and into the glass. Despite escaping the mishap unscathed, it seemed destined to be that kind of night for the Islanders, the kind of night where they could not seem to get out of their own way.

Josh Bailey stretched the lead to 2-0 early in the second period with a shorthanded goal off of an odd man rush created by winger Matt Martin. Bailey received the pass in the middle of the ice and chipped it through goaltender Jonas Gustavsson, who was starting his second game of the series after notching a 3-0 shutout in Toronto on Monday night. The Islanders seemed to be in complete control of the game through the majority of two periods of play. Al Montoya was strong in net when called upon, making confident challenges to stop shots from right wing Phil Kessel and defenseman Jake Gardiner when each man found open ice opportunities in the slot and above the right circle respectively. The Islanders controlled the flow for the first 39 minutes, as the total game stats would dictate. They out shot the Leafs 32-21, including 18-14 through two periods, they were the more physical team, compiling 32 hits to Toronto’s 24, and they controlled the puck with 21 takeaways compared to an opposing nine for the visitors.

However, with 1:05 left to play in the second periods, the game began to implode. Maple Leafs left wing Clark MacArthur got his team back in the game after sliding a shot passed an outstretched Al Montoya to make it 2-1. The goal was set up after center Josh Bailey was unable to cover the passing lane after being knocked down on the play in front of the net.

The Maple Leafs would tie the game just one minute and 47 seconds into the third period after defenseman Milan Jurcina knocked MacArthur into his goaltender, allowing Montoya no opportunity to make a save on Jake Gardiner’s wrist shot from inside the blueline. It would be the first career NHL goal for the highly touted rookie defenseman, acquired along with winger Joffrey Lupul in a trade that sent defenseman Francois Beauchemin to the Anahiem Ducks. It would also be Toronto’s second goal in 2:53 of elapsed time to tie a game in which they had been predominantly outplayed.

The ice seemed to open up throughout the third period as New York got away from their defensive style of play, letting defenseman jump in to support the offense as they out shot the Leafs 12-5 in the third. It was a move that would eventually prove fatal. At the 16:29 mark of the period, a Grabovski’s wrist shot deflected softly off of the stick of defenseman Milan Jurcina and fluttered over Montoya, who appeared set to handle the shot. It would give the Maple Leafs a short lived 3-2 lead.

With a shade under 13 seconds to play in regulation, Grabovski played the puck behind the net in his own end and attempted to send it around the boards and out of the zone to seal the victory. About half way through the puck took a fortuitous bounce directly in front of the net where winger P.A. Parenteau stood alone and waited to one-time the rolling puck over the shoulder of Gustavsson to steal the Islanders a point.

Islanders forward Matt Moulson nearly stole another point in a quick overtime period after banking a Josh Bailey rebound off the outside of an open net, after Gustavsonn had taken himself out of the play, challenging Bailey to make the initial save. With defenseman Mark Streit caught jumping up on the play the Maple Leafs sealed game on a rush to the other end as MacArthur buried a give and go pass from Grabovski. As was the case for most of the night, Montoya did not have much of an opportunity to make a save on the play. In spite of a fantastic effort, he was able to snare the puck with his glove only inches after it had clearly crossed the redline.

The loss is the Islanders second in a row after a three game winning streak. It sends them into the All-Star break with a 19-22-7 record, good enough for 13th overall in the conference with 45 points. The New Jersey Devils currently hold the eight and final playoff spot with a 10 point lead over New York. The Islanders will resume play Tuesday, January 31st on the road against the Carolina Hurricanes at 7:00 P.M.

John Tavares was shaken up at the end of the second period on a late hit from Nikolai Kulemin. He returned to action in the third. The game was Al Montoya’s first start since a 3-2 shootout loss in Winnipeg on Dec. 20th.

Information from this article can be found at http://scores.espn.go.com/nhl/boxscore?gameId=400047573