The NHL All-Star Fan Balloting, which allows fans from around the globe to guarantee roster placements for 3 forwards, 2 defensemen, and 1 goalie, has begun, and the first week voting results are in. One glaring omission? Detroit Red Wings goaltender Jimmy Howard. Perhaps it’s because he was left off the default ballot.

Each year the NHL Hockey Operations Department presents a ballot of players they presumably consider to be in the running for an All-Star roster position. Fans then vote to determine the first 6 All-Star players.  With no place on that default ballot reserved for him, Howard will rely strictly on write-in votes to get any attention from the league, who seem to have selected players for their star power instead of their on-ice play. 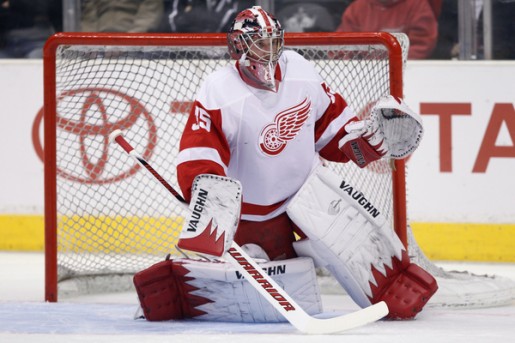 So why does Jimmy Howard deserve your vote? Well, as popular Red Wings blog Winging It In Motown put it, “He’s been one of the best goalies in the league. He’s been better than Tim Thomas; outshone Roberto Luongo; and is playing as good or better than 98% of the goalies in the NHL right now. If this game is about having the best, then Jimmy deserves to be in Ottawa facing off against the best, proving that he’s one of the elite goaltenders in the game today.”

Not enough for you? Well then I shall bombard you with the irrefutable facts and statistics. Jimmy Howard ranks in the top 10 of each of the 4 main goaltending statistics (GAA, SV%, Wins, Shutouts). Only 2 other goaltenders in the league share this distinction. Tim Thomas, who currently holds 1st place in goalie voting, and Brian Elliot, who was also undeservedly left off the ballot by the NHL. I’m not done though, lets break it down even further and do a statistic by statistic comparison.

GAA – At 4th in the league, Howard has a better GAA (1.87) than everyone on the ballot except for Tim Thomas (1.86). Ryan Miller, Ilya Bryzgalov, Jonas Hiller, Roberto Luongo, and Cam Ward (all featured on the ballot because of their names and not their play) find themselves ranked between 32nd and 40th in the league with numbers between 2.86 and 3.17.

SV% – Jimmy Howard ranks 9th in this stat,  Tim Thomas, Nikolai Khabibulin, and Henrik Lundqvist being the only ballot members with better numbers. At .930, Jimmy’s numbers are significantly better than those of Ilya Bryzgalov (.897) and Roberto Luongo (.896), 2 players who find themselves in the top 10 after a week of voting.

Wins – Jimmy Howard is tied for 1st with ballot members Kari Lehtonen and Marc-Andre Fleury with 13 wins, putting him ahead of the remaining 16 goalies featured on the ballot.

Shutouts – Again Jimmy is tied for 1st in the league, only Tim Thomas, Pekka Rinne, and Jonathan Quick find themselves both on the ballot and with this 1st place tie distinction.

And those are just statistics. It’s undeniable that Roberto Luongo, who has played back up for the Canucks in their last 5 outings, is having an egregious season, but he still finds himself both on the ballot and 9th in voting. Jonas Hiller and his Anaheim Ducks have had an awful first quarter, and his numbers are some of the worst in the league, but the NHL felt the need to include him on the ballot? Jaroslav Halak has played so poorly that he now finds his job stolen by Brian Elliot, who leads the league in GAA and SV%, yet they selected Halak for the ballot and not Elliot? It’s absolutely befuddling.

That’s why Jimmy Howard needs your help. He has out played almost every goalie in the league, and still he isn’t given the recognition or respect he deserves. So I implore you to take a few moments of your time to write Jimmy in as your goaltending vote, and while you’re at it, throw a few votes Brian Elliot’s way too. If the NHL wont give them recognition for their outstanding play, you can. With the joint efforts of both Red Wings’ and hockey fans around the league, It’s not unreasonable to think that Howard could crack the top 5 by the time voting is over. Let’s make a statement to the NHL. A statement that says, “We care more about performance than popularity.”