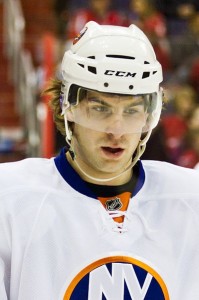 From the moment the puck dropped Tuesday night, the New York Islanders were the best team on the ice in Carolina. It could be seen in the first five minutes of play, it was obvious New York was simply skating faster than the hometown Hurricanes. The extra jump in their legs allowed them to skate from one end of the rink to the other, most often having at least four players involved as Carolina attempted to carry the puck over the red line. The back checking habit stifled the Hurricanes offense for most of the evening and allowed the Islanders to control the flow of play.

The Islanders sixth ranked power play opened the scoring early in the first period as John Tavares drew the Carolina penalty kill with his speed off the rush and set up P.A. Parenteau for the games first goal. It was Tavares’ 30th assist of the season. The play can be seen below.

You will see on the goal that Tavares’ speed from the red line through the offensive zone sets up the play. He beats the front side forward cleanly with speed, effectively removing him from the play. He most towards the corner quickly enough that the backside forward,  Patrick Dwyer, can not get into position quickly enough to take away the slot pass to Parenteau that lead to the goal. Tavares’ speed, passing, and puck handling ability in tight areas are making him a dynamic force for the offense.

In spite of his four point effort, Tavares was not the best player on the ice. Hurricanes center Eric Staal seemed to do everything in his power to keep his team in the game. Late in the first period, after his team had been essentially dominated for the first 20 minutes, Staal was robbed by Goaltender Kevin Poulin on a 2 on 1 rush that was set up by a Kyle Okposo turnover near the red line. Later in the second Staal was able to draw a hooking penalty on Mark Streit and simultaneously set up a scoring chance with an overpowering forecheck in the offensive zone. On a short handed chance, Staal dance waltzed away from Frans Nielsen to fire a wrist shot that was once again negated by the strong play of Poulin.

Poulin made his third start of the season in place of Evgeni Nabokov. Al Montoya was a healthy scratch. Theoretically, Head Coach Jack Capuano chose to start Poulin because he was the goalie that had seen the most playing time over the all-star break. It was a decision that paid off. Although, he wasn’t tested often, Poulin made strong saves on breakaways from Eric Staal and Brandon Sutter, who broke in after a bad line change. Poulin would only yield two goals over the course of the evening. The first was a bad bounce off of a blocked shot, as the Islanders continued their strong defensive effort early in the third. The bounce left Poulin out of position for an easy backhand goal by Brandon Sutter.  At that point the moment seemed to swing for the inconsistent Islanders. Minutes later, with the score 2-1, P.A. Parenteau would take an incredibly unnecessary slashing penalty in the neutral zone that would lead to the tying power play goal. It was the Hurricanes second goal in seven minutes of the third period.

The lead was short-lived as Tavares would capitalize on a Cam Ward turnover 41 seconds later to give the Islanders a 3-2 lead that would eventually be 5-2 after they added two empty net goals form Okposo and Tavares. Tavares would finish the night with two goals and two assists for four points. Tavares and his linemates accounted for four of the teams five goals, giving them 57 of the teams’ 117 over all. Good for 49 percent. “These next two weeks are the biggest part of out season. It’s either going to put us right in it and make the next two weeks even more important, or we’re going to make it even harder on ourselves,” Tavares said in a pre-game interview. The dominant effort, that included 23 hits and only 2 giveaways for the Islanders in the course of the evening, was mired by moments of inconsistent, mistake prone play late in the first period and early in the third.

Regardless, Tavares’ pre game comments as well as Capuano’s decision to start the goalie that gave him the best chance to win the game, shows that the Islanders are trying to build a playoff type atmosphere over the next two weeks, all in an effort to play some meaningful games over the final month of the season.