Third boxcar, midnight train,
Destination: Bangor, Maine.
Old worn out suits and shoes,
I don’t pay no union dues.
I smoke old stogies I have found
Short, but not too big around,
I’m a man of means by no means
King of the road 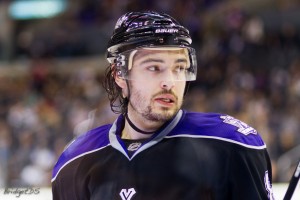 Replace the the worn out suits and shoes with black, white and silver RBK Edge uniforms and skates, and the means/no means line with millions of dollars, and you have a veritable dead-on description of the 2011-12 Los Angeles Kings. Oh, they pay union dues, never get within 200 miles of Bangor, Maine, and the midnight train boxcar is actually a shiny new charter jet. Close enough for government work.

Regardless, the Kings have been good on the road so far this season. Actually, quite good. In fact, they have just five losses away from home as of this writing, the fewest in the NHL. Granted, Los Angeles is tied for fewest games played on the road to this point in the season with St. Louis and Chicago, so sample size is certainly a factor. Yet the Blues are just 8-10-3 away from home and the Blackhawks 10-9-2, whereas the Kings are a solid 10-5-6. With 25 out of a possible 42 road points (59.5%), they are a whisker behind the Sharks (12-6-4, 63.6%), Canucks (16-9-1, 63.5%) and Predators (14-9-1, 60.4%) for highest percentage of possible road points earned in the Western conference this season. 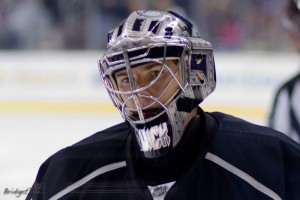 Despite a palpable sense of underachievement, Los Angeles has come up with some of its most consistent play on the road this year. On October 15th, Justin Williams scored twice to lead the Kings over the Philadelphia Flyers, 3-2 in overtime. Five days later, Jonathan Quick turned aside 28 shots en route to a 2-0 blanking of the Phoenix Coyotes. In November, they went 2-0-1 in a six-day stretch on the road versus the Ducks, Blues and Stars. December saw the club go just 3-3-1 away from home, as their epic offensive collapse and subsequent on-ice results culminated in the firing of former coach Terry Murray. The switch to new head coach Darryl Sutter brought fits-and-starts offensive improvement, but after a 1-0 overtime loss to the Winnipeg Jets, even Sutter seemed affected by the frustrating lack of scoring, saying: “We’re having trouble scoring. So, you have to give our guys credit just the way (they played). We gave up one goal in two games on the road. What are you going to do?”.

With the turning of the page (literally and figuratively) both to Sutter and the new year, however, came a return to road success, as Los Angeles earned five of a possible six points by defeating Calgary and Vancouver while being edged 2-1 in overtime by the upstart Edmonton Oilers. To date, the Kings have 58 points and currently sit in 7th in the Western conference standings. The Sharks’ division lead is a mere two points, albeit with three games in hand.

The offensive drought that plagued the team most of the first half of the season has shown signs of reversal of late. 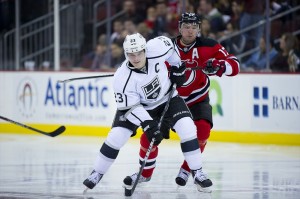 Los Angeles has scored 23 goals in its last eight games, a veritable explosion for a team that still sits dead last in the league at 2.12 goals per game. In addition, the long All Star break has likely benefited spark plug Mike Richards, who seemed a step slower than normal after missing eight games due to the ubiquitous “upper body injury” (concussion). With the brilliant play of goaltender Jonathan Quick, Anze Kopitar notching four goals in his last nine games, Dustin Brown netting three in his past seven and Jack Johnson three in his last eight, the Kings are on the cusp of a solid run in the second half, especially if Drew Doughty’s recent improved play can correspond with finding the back of the net himself. After the team’s 4-1 thrashing of the Ottawa Senators leading up to the break, #1 star of the game Kyle Clifford said, “We got a lot of confidence here and we’ve got a good group of guys, so, coming off a win, going into the break, none of these guys are going to be relaxed. We’re going to keep focused here and we’re going to take a little bit of downtime here, but when we come back we’re going to come right back to work.”

General Manager Dean Lombardi no doubt loves Clifford’s gritty determination. Shortly before Terry Murray’s dismissal, he said, “When Willy scores a goal, like the other night, we’ve got to get that attitude of, `Yeah, you’re freaking right,’ and not, `Whew, I scored.’ Here’s a veteran player that you’re counting on. As individuals, it’s human nature, don’t get me wrong, but we’ve got to get out of that funk, and have the attitude that we’re going to score. It’s not, `Oh my God, I scored.’ That goes for each individual, and it’s a team attitude. Because the same thing can happen to a team. You saw us the year we scored 236 goals. When we got down two goals, you never got the sense that this team didn’t think it could come back. But when you start falling into this rut mentally, it’s like, `Oh my God, we scored.’ We’ve got to get rid of that in a hurry. That’s attitude.”

That attitude will need to continue on the road. 20 of the final 32 games will be away from the Staples Center, including a six-game criss-cross between St. Louis, Carolina, Tampa, Florida, New York (Islanders) and Dallas. Two other trips of four games are on the horizon as well. The longest home stand remaining is just four games, between March 17th and 24th.

Los Angeles may not ride boxcars, wear worn out clothes, or step anywhere near Bangor, Maine, but if the team is to fight off the other clubs looking to shoulder them out of a playoff spot, they will indeed need to be Kings of the Road.

Capitals Have Their Future Top Centers in McMichael & Lapierre

Rangers’ Offense in 2021 Can Be Special

Red Wings Have a Shutdown Defender in Jon Merrill

Capitals’ Future Drafting Focus Must Turn to the Center