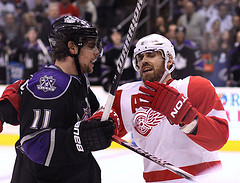 Anze Kopitar, left, believes the Kings are headed back in a winning direction (Photo by Chris Ikiri).

LOS ANGELES- With their early-season success fading from memory as quickly as the Western Conference standings are shifting, the Los Angeles Kings were in need of a big victory.  Few could be as important as the one they got last night at Staples Center.

The Kings trailed 1-0 and 2-1 but gained strength over 64 minutes as they picked up their play with each passing period.

“It’s a huge win.  It’s a big win against arguably the best team in the league right now,” said Williams, who had a goal and an assist.  “We battled back from a couple one-goal deficits, and we played a strong third period.  (Quick) made the saves we needed him to make.  It took 25 minutes but we got the job done.”

Quick excelled in net once again.  He stopped 27 of 29 shots and moved to 13-5-0 on the year. Kings Head Coach Terry Murray said after the game that he plans to play Quick more, hinting that he would strike a balance between the heavy workload Quick had last year and the proposed schedule earlier this season that would afford the starter Quick roughly one game off each week.

It was the play of Martinez, who scored an important goal and played a critical role in creating the game-winner, that may have left the strongest impression on fans, teammates and coaches.

“He played very well, he made the winning goal happen,” Murray said. “Martinez is making himself a good player. He’s got nice skills, he can really skate and he shoots the puck very well.  He’s got nice vision, and he’s starting to do a really good job on the defending part of it.

“You see the winning goal the way he broke up the play and started that attack out of his own zone and then drives right through to the net, backing in their defensemen, which opened everything up for (Dustin Brown) to make the pass to (Kopitar) and that was textbook how you draw it.”

Kopitar, whose powerful one-time blast netted the winner, was pleased that the Kings responded to their recent skid by stringing together a couple of wins.

“For sure, it’s definitely a confidence-booster always when you win a few in a row.  Things start to click,” Kopitar said. “Even on the two goals we scored, maybe during the slump that doesn’t really go in.  That’s the funny thing about hockey, when everything goes right everything goes in, when everything goes wrong it’s not a chance in the world you’re gonna get a lucky bounce or something.  I think we turned things around and hopefully we can keep on going.”

The first period saw an advantage in shots for Detroit although the middle portion of the period tilted the Kings’ way briefly.  Respectively, a strong Red Wings backcheck and an alert glove save from Chris Osgood on a rising backhand from point-blank range denied a pair of strong opportunities for winger Trevor Lewis.

Coach Murray praised Lewis’s play and progress.  He said that while he had not anticipated Lewis getting top-six minutes, he felt Lewis was fitting in nicely on the second line and that his development was on track in his fifth year with the Kings organization.

Los Angeles’ best opportunity came on a power play following a delay of game call against Osgood. Set up in an umbrella formation, a high shot coming off the right-wing wall from Kopitar created an obese rebound.  Brown was prevented from sweeping the puck into an open net by Brad Stuart who effectively tied Brown up down low.

There were many contested plays near both goal creases, the sort of even-odds battles that test the resolve of a team at both ends.

“I liked what we did in the offensive zone in front of the net.  (Brown) especially, (Brown) was around the net a lot tonight,” Murray said.
“At the other end, I think over the last three or four I think we’ve really given that a big push, a big push in practice and we’re starting to follow through with it in game situations so it’s getting there, it’s getting better,” Murray added.

The Red Wings struck first when center Pavel Datsyuk stole the puck from Kopitar at the red line. Datsyuk pushed forward to shoot a lively wrister that popped a rebound into the left slot where defenseman Jonathan Ericsson hammered it past the lunging Quick.

Datsyuk entered the night second to only Washington’s Alexander Semin in takeaways. If he holds his position or surmounts Semin, this would make his fourth-consecutive season finishing either first or second in thefts.  When asked what makes Datsyuk such a stealthy stick-checker, his victim Kopitar could only heap praise on the Russian pivot Datysuk and his teammates.

“I don’t know, that guy is unbelievable.  He’s probably the leader in takeaways in the league and he’s always up for the Selke, too,” said Kopitar.  “With the firepower and the offensive skill he has you have to be really careful playing against him and Zetterberg and those guys.  You just have to make the right decision 100 percent of the time.”

Response from the Kings came swiftly as they scored the equalizer not 30 seconds into the second period.  A skipping point shot from defenseman Rob Scuderi was deflected into the net from between the circles by Williams.  Kopitar earned the secondary assist on the goal.

Just 36 seconds afterward, Ericsson created a Matt Greene turnover with a timely effort on the forecheck, which led to a scramble for a loose puck  in front of the net.  Winger Todd Bertuzzi, who had covered Ericsson’s defense position, swooped in and roofed a shot on Quick’s glove side to reclaim the lead.

This second-stanza scoring flurry continued at 7:18 of the second period when Martinez knotted the game at a deuce. Justin Williams moved the puck from low to high where Peter Harrold’s D-to-D pass found Martinez, who fired the puck in through a Dustin Brown screen.

The remainder of the period passed with a handful of near misses and the second huge hit of the night by Stuart. Stuart stapled Kyle Clifford to the end boards in the first period and drilled Davis Drewiske on the left side in the second.

Los Angeles came up with a key penalty kill following a tripping call on Kyle Clifford. Jonathan Quick fought through all sorts of traffic to find the puck off Tomas Holmstrom’s stick from, where else, the blue paint. The Kings cleared and blocked their way through the remainder of the penalty to stave off the Detroit advantage.

The Kings are now 43-for-43 at home on the penalty kill and remain the only team not to surrender a goal a man down at home this season.

“That’s hard work, that’s pride, that’s commitment to the details, good goaltending.  I think there’s a lot of things that have to come together to have good penalty killing,” Murray said.

The Kings nearly took a lead just over three minutes into the third. Kopitar swung behind the back of the net and swiftly centered a one-time pass for Williams, whose shot was turned aside by the left pad of Osgood.

A tight-checking final frame ensued. Detroit continued to keep their shifts short and their tempo high. Both teams crowded the opposing crease at times but with no luck in the scoring department.

The Kings collected a puck near their own blue line to key a quick counterattack. A two-on-one break with Wayne Simmonds and Brad Richardson ended when Simmonds fired from the slot into the body of Osgood who effectively minimized the shooter’s angle.

Osgood was solid in net, spelling the starter Jimmy Howard who posted a shutout Friday night in Anaheim.

“Nowadays you need a goalie who can come in and play well for you. You don’t want your starter getting tired because you don’t have confidence in your back-up,” said Stuart, who continued his strong play on the Detroit blue line.  “We have confidence in Ozzy so for him to get in a couple games and get back into his comfort zone is going to be important.”

Ryan Smyth fought hard for a puck in the corner with time running out and his centering pass barely missed the stick of the pinching Jack Johnson and an opportunity for a buzzer-beating winner.  The puck drifted wide and soon after the contest went into overtime.

The Kings rush nearly ended the game immediately in overtime.  Brown skated in with speed on Osgood, but the confluence of three sticks at the front of the net neutralized the Los Angeles threat.

Consistent with the quick tempo of the regulation action, the four-on-four period was fast-paced and filled with quick passing plays.

With a shootout looming,  Holmstrom’s pass for the pinching Nicklas Lidstrom went wide after it was deflected by Martinez, igniting the three-on-two rush the other way.  Martinez joined the rush, crashed hard to the net and eliminated a quickly recovering Lidstrom from the play.  His aggressive play created space for a beautiful pass from Brown that Kopitar one-timed past Osgood to the elation of (most of) the crowd.

“The key to that is our guy, I think it was (Martinez), driving to the net really hard to take that D away, to drag their D to the net, too, and that’s where the seam opens up,” Kopitar said.

Detroit sought to sweep a three-game swing through California after dominating the San Jose Sharks and blanking the Anaheim Ducks earlier in the week.  They earned five out of a possible six points, denied the complete set of six by the Kings’ resilient play.

“That’s what happens, we’re going for two points and it’s just a little bounce on the puck and all of a sudden it’s on the rush the other way,” said Detroit forward Henrik Zetterberg.  “That’s why they have four-on-four and that’s why most of the time you score some goals there.

“Overall, it’s been a good road trip.  We got five out of six points, we wanted to get the last point here but you can’t get it all,” he added.

This was the first meeting between the two teams this season.  Both Zetterberg and the captain Lidstrom were impressed by the development of the Kings since last year.

“They have some young players that are just getting better and better,” Lidstrom said.  “They are tough to get scoring chances on, they very seldom give you any clear-cut opportunities.  You have to earn your chances and they’re trying to keep you on the outside all the time.  So, they play a very solid system.”
Lidstrom also praised the young Los Angeles rearguards Drew Doughty and Jack Johnson.
“They’re both great skaters, and I think we saw that tonight,” Lidstrom said.  “They can beat the first guy with their speed and their skating ability, and they both have play-making ability, too.  They can make the plays and both of them are so poised with the puck they’re not gonna throw it away.  They’re gonna hang onto it and make the right play.  So, it’s impressive with young kids like that.”
The Kings, who would undoubtedly love to get back on the ice soon, will have another chilled week with no game until Thursday when they host Calgary.
Murray said it is possible that winger Alexei Ponikarovsky will return in that game.  Fox Sports West reported last night that defenseman Willie Mitchell may be ready as early as Dec. 13 when the Kings visit these same Red Wings at Joe Louis Arena.