It was a pairing of All-Star goalies, as the Ottawa Senators and Los Angeles Kings squared off in L.A.  Although it would ultimately be the Kings fourth line, helping to propel the club into first.  A game where one could use the names Kyle Clifford and Gordie Howe, in the same sentence. 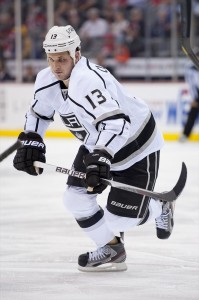 For an inter-conference battle, there was no love lost at Staples Center.

Early in the first, Zenon Konopka and Clifford dropped the gloves.  That was step one in Clifford and company setting the tone in this one.

Late in the frame, Los Angeles used a beautiful setup.  As Don Cherry would say, “off the glass and around the boards.”  Well it wasn’t Brad Park, but Willie Mitchell would do.  Off a pass from Clifford, Mitchell blasted one from the point and used a perfect screen from Colin Fraser in front and beat Craig Anderson, with a shot he never saw.  It was goal number three for the rugged defenceman and a 1-0 lead for the Kings.

What a tough customer that Mitchell still is, ever since I first saw him play with Albany back in the late 1990’s.

Moving on to the second, it didn’t matter that it was Los Angeles rather than San Francisco, it was not a good night to be on the trolley tracks.  Drew Doughty was skating along the boards when he got upended by Colin Greening and landed rather awkwardly and face first onto the ice.

Yet Doughty and the Kings offense would get back on its feet.  Clifford came streaking into the Ottawa zone, shooting the puck off Anderson.  That’s when Fraser kept the play alive, whacking the puck out front and Clifford following his shot, found the puck when no one else could and found the back of the net.  It was the third goal of the campaign for Clifford and netted him the Kings’ first “Gordie Howe Hat-Trick” of the season.

Later in the period, the Kings clicked on the power-play with a familiar strategy.  Jack Johnson hammered home his eighth goal and got some help from Dustin Brown, who blocked out Anderson on the play.  Doughty was credited with his second helper of the night and Justin Williams chipped in with a secondary assist. 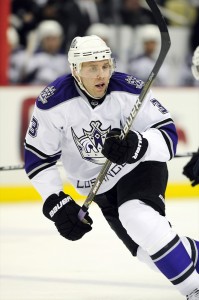 Which begs the question, if Anderson didn’t see any of the shots that beat him, did he really give up three goals?

L.A. would cap off its scoring on a penalty shot.  A penalty shot that was incorrectly ruled as a covered puck in the crease by Sens defenceman Chris Phillips.  Regardless, Trevor Lewis took advantage and bested Anderson, who wouldn’t come back out for the third.

In the third, the trolley came riding into town once again.  That’s because Clifford, to top off his night, absolutely pancaked Chris Neil.  No it wasn’t enough to put Dustin Penner out, but Neil certainly got flattened.

Ottawa’s lone goal came when a pair of All-Star’s connected on the power-play.  Erik Karlsson found Daniel Alfredsson in the slot and he beat fellow All-Star Jonathan Quick, breaking the shutout at 4-1.  Quick was otherwise sharp with 27 stops.

Being aggressive out front and on the attack, the Kings were able to grind out a solid victory.

Hence, the Kings are now tied for first place in the Pacific Division, with the San Jose Sharks, at 58 points.

Colorado Rockies – The 10 Best to Wear the Jersey

3 Takeaways From Canadiens’ Game 2 Loss to the Penguins

Canucks Have Some Issues to Fix For Game 2