This weekend, The NHL’s best players descended upon Ottawa to participate in the 2012 Tim Horton’s NHL All-Star Game.

Obviously, the event is for the fans to enjoy, and gives the players one last chance to relax before the grueling second half of the season begins. The skills competition is enjoyed by everyone, and we even saw Zdeno Chara of the Boston Bruins set a record for hardest shot at 108.8 mph. Patrick Kane channeled his inner Clark Kent on an amazing diving shot in the breakaway challenge, and Steven Stamkos won the elimination shootout. All weekend, the world’s greatest hockey players show off their skills for fans and media alike.

There’s just one problem: aside from about 10 seconds of rookie participation, some teams and their fan bases were left out of the weekend festivities. The Colorado Avalanche sent Gabriel Landeskog to take part, but there is no longer a rookie game, and he participated in only one event during the skills competition. Other teams, Like the New Jersey Devils, actually had no participants in the weekend at all (The teams two rookies who were chosen sat out with injury).

Make no mistake, all the skaters who made the game this season deserve to be honored among the leagues elite. However, when players such as Alexander Ovechkin announced he would be missing the all-star game due to a suspension, the NHL replaced him with James Neal, who is having a terrific season, but also is from a team that is already represented, the Pittsburgh Penguins. The league must make sure that each team sends a player to the all-star game. Instead, Patrik Elias of the New Jersey Devils would have given them a player for this weekend.

Not to take away from Landeskog, who deserves to be honored for his terrific rookie season. However, the NHL should use the rule that other leagues have to make sure at least one player from every franchise participates in the all-star game itself. First and foremost, this game is for the fans. While it is true that some franchises like the Pittsburgh Penguins and Philadelphia Flyers may have several popular players that deserve to be voted in and have that experience, each fan base also deserves a chance to see their best player go head-to-head with the Malkin’s and Datsyuk’s of the world.

The Colorado Avalanche have not been very good in terms of scoring this season. They entered the all-star break 24th in goals scored per game. Except for Ryan O’Reilly’s outbreak season, there aren’t very many forwards who deserved to make the all-star game this year. The Avs do have one player who remains the reason they are still competing for a playoff spot heading into the second half of the season. 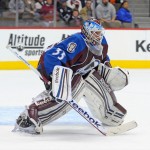 Giguere has been a critical part of Colorado's success this season. (Dustin Bradford/Icon SMI)

Left in obscurity as a member of the Toronto Maple Leafs for the last two seasons. Giguere has given the young Avalanche squad a veteran presence they’ve needed throughout the season. According to NHL.com, “Giggy” is 12-8-1, posting a 2.15 GAA, and a .921 save percentage, which ranks him 8th and 11th in the league . For a franchise struggling with attendance and regaining the strong fan support it was once known for, the all-star game represented a great chance for a player like Giguere to display some of the talent Colorado has.

Sure, the other goaltenders who made the game this year have been having great seasons. However, Jimmy Howard, Tim Thomas, and Henrik Lundqvist had other players from their team represented. Arguably, it wouldn’t be fair to remove any of those goaltenders from the lineup because of their staggering numbers so far this year. Perhaps, the NHL could look in to expanding the amount of players that make it. By adding 4 forwards and 2 defenseman, the league could make room for player’s from teams that received no all-star selections. Although it would make rosters larger than a normal team, it’s a small price to pay for a happier fan base. Goaltenders already rotate during the course of the game, so an extra line per team would not change much.