After surrendering a 2-0 1st period lead Sunday afternoon and falling behind 3-2 to the Washington Capitals early in the 3rd period, the best line in hockey took over for the Pittsburgh Penguins.

Starting inside his own blue-line, Evgeni Malkin made a rush up ice and reminded everyone watching of what Mario Lemieux used to look like carrying a puck end-to-end while taking a game over. Malkin did not find the back of the net. The puck got swiped into the right corner of the Cap’s defensive zone while Malkin lost his footing. Roman Hamrlik tripped Malkin, and Geno still beat Hamrlik in a one-on-one battle in the corner to retrieve the biscuit. Malkin had the presence of mind to find James Neal in a soft spot and Neal sniped a laser over the glove-hand of Capital’s goaltender Michael Neuvirth to tie the contest 3-3.

Malkin’s magic act was not yet finished as the Pens looked to beat the Capitals at home in the regular season for the first time in nearly four years.

Zybnek Michalek made a high cycle with Neal, and Michalek left a delicate pass for Neal to one-time towards the Capital’s net. Neal missed wide-left and the puck caromed off the boards to the other side of the cage with Malkin snapping the puck in before Neuvirth could slide over to the right side of the net.

Malkin’s over-time winner continued the Penguins six game winning streak, and capped off three-point efforts for he and Neal. This duo has been phenomenal of late. Add Chris Kunitz with his grittiness in the corners and in front of opponents’ goal creases, and these three players make up the best line in the NHL.

Malkin anchors the line and is currently revered as the best player in the league. Geno has done nothing but thrive under the pressure caused by the absence of Sidney Crosby and all of the other injuries the Penguins have been dealt this season.

Words can’t even begin to describe Malkin’s recent dominance. Every team has their top pair of defensemen matched up against Geno and his line mates every game.  This has not caused any trouble for the Russian phenom.

Malkin leads the league with 58 points. He has a 1.41 points per game average and has played in approximately six games less than anyone ranked in the top ten of points scored this year. Geno has the most even strength points in the league with 40. He has compiled three significant scoring streaks of five and nine games while currently building a six game scoring streak.

The majority of his goals have been penciled into the score sheet in the 3rd period or overtime when games are decided. On January 15, against the Tampa Bay Lightning, Geno had a natural hat trick in the 3rd period. He is on a six game goal scoring streak tallying nine goals in that time.

No one has benefited more from Malkin’s sensational play than James Neal. The 24 year old left-winger has had a complete turnaround from last year. Neal played 20 games for the Pens last season after coming over in a trade from the Dallas Stars. He scored one goal in that time for the Pens. 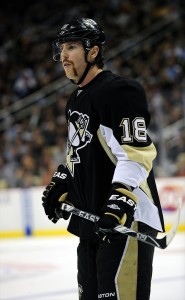 This season Neal has found his groove playing alongside Malkin and Kunitz for most of the season. Neal was always known in Dallas for having fast starts every season. After eclipsing his goal total from last season in the opening game this year against the Vancouver Canucks, and scoring nine goals in his first twelve games, some thought Neal would hit a speed bump.

Nothing could be further from the truth as Neal has produced at a consistent pace all season long. He was brought to Pittsburgh for one reason and that was to score goals. Neal is tied for 3rd in goal scoring with Malkin with 26 goals. The Penguins’ left-winger is one goal away from breaking his single season career high in goal scoring. Neal has registered all of his goals in about half as many games when he scored 27 goals two years ago for the Stars. Neal is also going to outdo his career high in points for a season by the time his 2011-12 campaign is complete.

While Malkin provides everyone with the Lemieux-like dangles and Neal scores on some unbelievable laser shots, Chris Kunitz gets lost in this limelight.

Kunitz does all the dirty work for this line. He takes the crosschecks in the kidneys while digging his skates in front of an opposing team’s net. He provides a physical attribute and some protection for his line mates. He has the grit and determination to do all the little things that do not show up on the score sheet. Kunitz does not receive the same notoriety as Neal and Malkin.

Where Kunitz has been most effective has been on the power play. His job is to retrieve loose pucks and create screens in front of goaltenders. When an NHL goaltender can see a puck, more often than not, he will make the save. 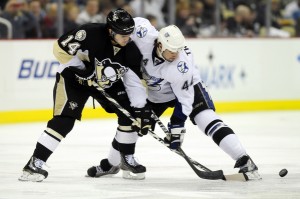 Kris Letang scored a power play goal Sunday afternoon against the Capitals on a mediocre slap shot. Letang’s shot had no chance of getting by Neuvirth without the screen provided by Kunitz. Although Kunitz was not awarded an assist on the play, he deserved one for making Neuvirth lose sight of the Letang shot.

Kunitz deserves much more praise for all the little things he does, and without his gritty style of play, the Penguins top line would not be as successful as it has been all season long.

The MNK line holds all the key ingredients to make them unstoppable. Malkin is a stud play-maker who can dangle, score and set up goals. Neal leads the league in shots taken, shoots from everywhere on the ice and may have the quickest shot release in the league. Kunitz wins all his one-on-one battles in the corners, hits everything in sight and has some scoring touch to go along with his tenacious play.

Without the MNK line, the Penguins would be in the basement of the Eastern Conference. Their line has produced an alarming amount of the goals and well over half of the Pen’s goals. To sum up the production, Evgeni Malkin has figured in on 34 of the Penguins’ last 61 goals. That is 56% that Malkin is scoring or assisting on goals for the Pens.

If this line keeps producing goals at the same rate, the Penguins will continue to climb up the Eastern Conference standings. If Jordan Staal and Sidney Crosby would return to play healthy, and for a significant period of time, the Penguins could easily find themselves in the Eastern Conference Finals. Not only does Pittsburgh have the two best players in the world, but they now have the best scoring line in hockey.