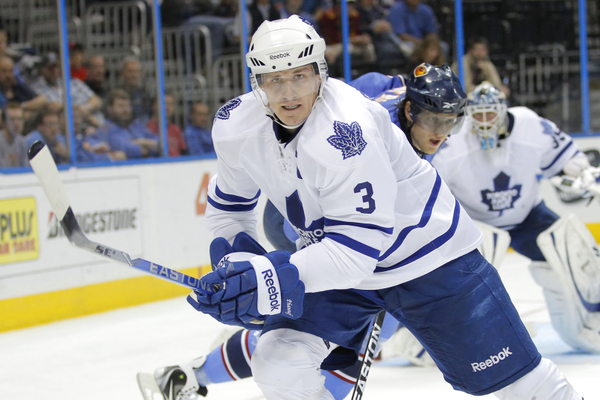 Nice to see the buds pickup a hard-fought victory. Continuing their five-game road trip, and facing a very pesky Dallas Stars’ team, the Leafs definitely earned this one. Realistically though, it could have gone either way. Even if the Stars were without their best player, and captain, they showed in the second and third periods why their had the October they had. The Leafs also showed their resiliency to battle through some rough patches during the night. Along with some key saves by Kari Lehtonen and Jonas Gustavsson, and we had a very competitive, gritty hockey game on our hands.

On to the notes:

– Greg Millen and many, many Twitterers (is that what you call people who Tweet?) were ranting and raving about Joe Colborne’s night. Yes, he had an assist, and he was definitely a force, but let’s not jump on this kid’s bandwagon just yet. He’s still young, and his game still needs polishing before we can consider him a mainstay with the Leafs. 4 points in 5 games is obviously encouraging, but there are still little things that he needs to work on. One thing I noticed: when to pass the puck. He obviously has great playmaking skills and a very high hockey IQ, but I noticed on one too many occasions tonight he made low percentage passes or behind the back no look feeds that resulted in turnovers.

– On the plus side, Colborne is centering a very good line right now. Himself, Frattin, and Crabb are forming a great third line that will force tough decisions on who goes down when the time comes. The thing that stands out the most when watching this line go to work is their cycle down low. It’s created many opportunities by getting teams tired, and chasing the puck. And the stats don’t lie: In their 4 games together, they have a combined 4 goals and 9 points. Like I said, once the time comes, it’s going to be tough to separate these three if they keep it up.

– Don’t want to state the obvious here, but Jonas Gustavsson has three straight wins. He also has a .948 SP in those three wins. Might have secured himself the backup job when Reimer comes back pending anything drastic, because we all know we were saying about him before his start in Washington a week ago.

– Gustavsson has been making the key saves late in the game, and it’s put him on a roll. What’s still patented by the ‘Monster’ though is those untimely goals he almost always could have had early on the game. It hasn’t cost the Leafs yet, but will eventually. Needs to gain ground on his consistency if he wants to ever be an NHL starter. I wrote about this here.

– On that note, James Reimer took part in first full practice today, and has gone a little over a week now without any concussion(like) symptoms. Burkie and Wilson still say he’s over 10 days away though. Either way, whether it’s a game or two, or 10 days, Reimer’s return is nearing.

– How about some good ol’fashion revenge from Joffrey Lupul? After being cut in two places on the face by a Sheldon Souray high stick late in the game, he comes back and pots the shootout winner. Love the heart and determination. Speaking generally though on his game, he’s been the difference maker from Kessel 10-11 to Kessel 11-12. People keep reiterating that Lupul’s 27 points are a result of playing with a red-hot Phil, and while that may be true to an extent, he’s been the reason Kessel has been able to sustain his level of dominance and not fall into any sort of slump. He’s given the Leafs a whole different scoring dimension on their top line, so now teams have two threats to worry about, not just one like last year.

– Is it safe to say Luke Schenn is back? Since being benched for the 7-0 shellacking Boston gave the Leafs back on the 5th, he’s been a whole different defenseman. Millen pointed something out correctly tonight (feels weird to say, doesn’t it?), and it was that when Luke Schenn is on his game, his stick is very active and precise in the way it interferes with the puck. His stick has been very active, and the pinnacle of it was watching Schenn save a goal by throwing a desperation poke check at Michael Ryder early in the second. He’s finally starting to justify that contract, and combined with Cody Franson’s solid play, Ron Wilson finally has six defenders he can rely on at any point of the game.

– Speaking of Franson, did you know he only played 11 minutes tonight? I was just as surprised. Since his promotion due to Komisarek’s injury, I thought he had been playing exactly like the Leafs wanted him to. He’s been physical, using his hulking frame, and has been picking and choosing when to use his offensive game rather than always thinking offense first. He was a minus-1 on the night, sure, but when Eric Nystrom is on, even Bobby Orr wouldn’t have helped.

– How about that Jake Gardiner kid? Sorry that I keep talking about the defensive side of the Leafs, but there is just so much to rant and rave about after tonight. Gardiner played almost 30 minutes tonight, and was right up there with Dion Phaneuf for best defenseman honors. It’s amazing to watch this kid skate with the puck, his poise, hockey sense, and puck handling skills are next to none. He also seems to know what to do with the puck under pressured situations and almost never does anything too drastic that risk him being out of position. I hear him being praised all the time about his offensive game, but I’ll be the first to tell you his defensive side has been phenomenal, and he is quickly becoming Wilson’s go-to guy in pressured situations with Phaneuf – and that’s if he isn’t already. Kid’s got a bright future.

– Speaking of Phaneuf, he had a goal and an assist tonight, raising his totals to 4 goals and 20 points in 24 games. Where are all you anti-Phaneufs now?

– I feel as if I shouldn’t say this, but I’ll go ahead anyway: Tim Connolly is better at centering Clarke MacArthur and Nikolai Kulemin than Mikhail Grabovski. No disregard to Grabo, but he’s an offensively oriented center, and when his offensive game isn’t working..well..the Leafs are S.O.L. Connolly completes and compliments that line almost perfectly. His defensive presence makes the second line a defensive one as much as an offensive one, and his creativity in the offensive zone creates chance after chance after chance. I’m not the only one who thinks so too, as Wilson just kept on going back to that line when the buds needed a solid shift. It’ll be interesting to see what happens when Grabo comes back, because Wilson would be stupid to split them apart right now.

– Speaking of top-six centers, Tyler Bozak could be another to force Grabovski to the third line. Since being called upon to center the top line, Bozak has been producing everywhere. In his most recent four game stint with Kessel and Lupul, he has 5 points, a plus-2 rating, and although I don’t have an exact statistic for you, been fantastic in the face-off dot. When you think of how well he, Connolly, and Colborne are fitting into their roles right now, it’s looking really blurry for Grabovski right now. We’ll have to wait and see.

– I got to say, for the first time this season, I can confidently say Phil Kessel was invisible tonight outside of a few rushes up the right wing. As many of my Twitter followers would say, “Oh no, Kessel didn’t have a point today? #slump”. #sarcasm.

– How about that power-play? For probably the first time since the lockout, the Leafs are top-10 (let alone top-5) in the league. We currently have the third best power-play in the league. Going 1/4 tonight, the difference between the power-play now and three weeks ago is literally night and day. Before, all you had was Kessel either try to hit high risk, low percentage cross ice passes or go to the middle and shoot. The big difference I’ve noticed has been the position of the centerman. Before, he’d be either in front of the net or down low. Now, Wilson (or Gordon or Conin) have left the wingers to screen the goalie, and have setup the pivot right in the slot, giving support to the men on the wings, and the defenseman on that same side. This has forced teams to clog the middle to prevent the shot from the slot, and has opened up down low for our big wingers to drive the net. My analysis anyway.

– Our penalty-kill? It still sucks. I guess one thing at a time.

– Keep it up Nikolai Kulemin. Despite not scoring he’s been doing all the little things right – battling in the corners, getting to loose pucks quicker, finishing his checks, backchecking, the whole ordeal. Pucks just aren’t going in for him right now. One two-on-one tonight where he shot instead of passed. That’s the Kulemin of old, the Kuly that netted 30 last year. He’s got a great shot, he uses it more, 30 will come again.

– Overall, the Leafs played a solid game. Got caught up in the second period for a little too long, but recovered nicely while receiving late timely goaltending from Goose. Should earn him another start on Sunday, but with Wilson, who knows. Let’s just focus on making sure we don’t lose to the Ducks, who are 1-7-2 in their last ten, and 6-12-4 overall. GO LEAFS GO!

Shoot me an email regarding any questions or opinions! alex.mamalis@ymail.com