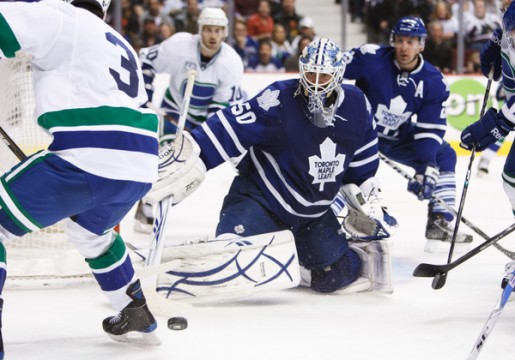 The Leafs don't have a top-tier goalie right now. Do they need one? (Icon SMI)

Maple Leafs Panel is a weekly feature that is published every Monday here on The Hockey Writers. It is a feature where THW Toronto Maple Leafs correspondents Lukas Hardonk, Mark Ascione and Alex Mamalis answer three questions that concern the Maple Leafs each week. To catch up on previous editions, click here.

Question: It’s trade deadline time and everyone is looking at what the Maple Leafs need if they’re going to make a playoff run. Taking a look at the past, which former Maple Leaf who played for the team post-lockout and STILL plays in the NHL should the team be missing the most?

Lukas Hardonk: One of the things that the Maple Leafs need right now is a top-line centre with size and the ability to score. While Tyler Bozak and Mikhail Grabovski have got the job done while splitting duties, the Leafs still lack that physical presence up front. That’s why this one seems a little obvious for anyone who believes in that theory.

Nik Antropov, currently a member of the Winnipeg Jets, last played for the Leafs during the 2008-2009 season when he had 21 goals and 46 points in 63 games. His production hasn’t fallen much since he was traded and he remains a top-six forward who can play the centre position with intimidation due to his 6’6″, 245-pound stature.

Mark Ascione: I am tempted to say Ian White. He is smallish and I realize that he is helped greatly by playing for a good team in Detroit, but he has a good cap number, he has matured as a defender and he has always brought a hard work ethic to the game. I am not sure why Leafs head coach Ron Wilson had a problem with him and benched him for so long, but I think that he would have been an

important part of the defence, which has been an issue this season.

Some offensive ability, some grit. He’s bounced around a bit and I’m not sure why Calgary felt they couldn’t keep him, but I think he could have helped this blueline.

Alex Mamalis:  This one is a bit of an oddball choice, but I’m going to go with defenceman, Hal Gill. Toronto really lacks a style of defensive consistency and Gill is the epitome of a reliable, defensive veteran. He’s so many things that Toronto could use right now in their defense: Veteran leadership, consistency from not only game to game, but shift to shift and a valuable penalty killer.

He would also be a guiding presence to the younger players on the roster, something also lacking on the current ensemble of players. He’s no game-breaking talent like a Mats Sundin or Eddie Belfour, but although players like Gill always go unnoticed on championship teams, they’re certainly always there.

Question: The Leafs have had their share of offensive tears and defensive stands this season. While some credit their recent success entirely to Jonas Gustavsson, is a top-tier goalie really just as important to the Maple Leafs as most people think?

Lukas Hardonk: This is a team that has relied on goaltending for much of the season. At the begging of the year it was James Reimer, then Ben Scrivens and now the number one role sits with Jonas Gustavsson. None of those goalies are considered to be in the top-tier so to speak, so no, a top-tier goalie is not all that important at the moment.

Perhaps the biggest reason why, is the outstanding play of Phil Kessel and Joffrey Lupul. They may just be the best one-two punch in the league outside of Daniel and Henrik Sedin, leading the Leafs offensively. The team’s strong offensive play has taken some heat off of the goaltending, but that may not last for ever. So, for now, goaltending isn’t extremely important, but it may be in the near future.

Mark Ascione: The Leafs have always seemed to require a big-save, big-game goalie, with the one exception being when Felix Potvin had that steady defence in front of him from 1992 to 1994. They just tend to give up so many chances; what they require is a workhorse type goalie who can be relied on for 35-40 saves, because sometimes that’s what they give up.

Last season it was James Reimer, this season Jonas Gustavsson is getting it done. What they need is a goalie with that Grant Fuhr ability: Won’t let in the back-breaker goal. Trouble is, the jury is still out on whether either Reimer or Gustavsson are that type of goalie long-term. At the least, if no playoffs this year, I think they need to identify who they are backing, let the other go and get a veteran back-up. Goaltending has not been the main issue this year, but I think they need to stabilize the net.

Alex Mamalis: The question of Toronto needing a goaltender varies from person to person. For example, I’m a firm believer that Gustavsson is doing fine right now, because his play has been more than capable. Since mid-November, he’s posted a gaudy .927 save percentage. If that’s not quality, then I don’t know what is. On the other hand, you have long-time fans like my father, who isn’t nearly as convinced as would trade a leader like Lupul for an established talent in goal in a heartbeat.

James Reimer has been rather inconsistent this season (Icon SMI)

Going back to the question, my answer is yes and no. Yes, because if Toronto had a Lundqvist or a Quick in goal, the emphasis on defense wouldn’t nearly be as much as Burke puts now. When you have a talent like that in goal, you can focus on other things a lot easier. The Leafs have received above-average production from Gustavsson and they haven’t done too bad, have they?

Question: As everyone knows by now, the Maple Leafs signed defenceman John-Michael Liles to a four-year, $15.5 million contract extension on Wednesday. What is your overall opinion of the signing?

Lukas Hardonk: When Liles came to Toronto in the summer of 2011, he was seen as an overpaid defenceman who would need to remain healthy and put up 45-50 points in order for the media not to scrutinize him. However, he has proven to be more than that; a player who can run a power play, provide solid offence from the back-end and relatively good defence as well.

Not only did the Leafs bring down his annual salary cap hit, but they signed him to a salary that fit his level of play a lot more. To go along with his nice offensive production and good defensive play, Liles is a veteran presence in the locker room who brings a certain amount of leadership that the Leafs have lacked for the past few seasons. A good, smart signing by the Maple Leafs.

Mark Ascione: Lots of positives here: Liles is a slightly better, cheaper Tomas Kaberle, but I think he’s more of a presence in the locker room and more of a leader/teacher. He’s a puck mover, a 40-point blue liner and a decent power play guy. It opens up a possibility of general manager Brian Burke moving someone in a trade.

I am sure they would have made overtures to Liles in the off-season, but without knowing, they may have approached this trade deadline thinking “trade someone and we don’t sign Liles, then what?” That’s not the basis for why I think it’s a good signing, though. Liles is just a good, veteran defender and it’s going to help having him around for another four years as guys like Jake Gardiner, Luke Schenn, Keith Aulie, Jesse Blacker and Stuart Percy develop.

Alex Mamalis: This is a very good signing, for sure. Aside from what the deal implicates (almost 10 NHL capable defenseman at Leafs’ disposal), it’s the value that gets me most. At $3.875 million, Liles will be earning almost a full million less than most of his ilk earn.

Now, it’s unreasonable to suggest he continues his career 0.53 point-per-game pace during the deal, but even if he produces a full point less at 0.43, the value would still be great at 30-35 points along with his calm poise on the ice and evidenced leadership qualities.

Add to the fact that the cap hit is friendly and Burke could ship him out at any time in the latter part of the deal, as well as that this deal officially signals the end of a rebuild in Toronto.