Is it my imagination, or is everybody talking about trading Kasperi Kapanen for a defenseman. Not that the Toronto Maple Leafs don’t need a defenseman, but for Kapanen? I hope it isn’t so.

For example, CBSsports.com believes that Kapanen’s breakout this season, with 30 points in 49 games (15 goals and 15 assists), makes him a prime trade chip for the Maple Leafs as the deadline nears. They are not alone. Others, even early in the season, suggested that the Maple Leafs can’t afford to sign Kapanen to a contract after this season, so they might as well trade him.

I’m hoping that’s simply wrong. Thankfully, I’m not alone on that front. Former NHL’er Matthew Barnaby was clear on The Good Show that he would not trade Kapanen unless the return was huge. Jake Muzzin, a name bandied around recently as a possible target, simply wouldn’t cut it and a top blueliner coming back would be minimum for Kapanen – so says Barnaby.

Related: Should the Maple Leafs Trade Nylander for Simmonds?

Sportsnet’s Steve Dangle also agrees, believing Kapanen is too valuable to be traded for a back-end ‘upgrade.’ Instead, Dangle believes the Leafs should trade draft picks rather than roster players. Both Dangle and Barnaby are right. Kapanen is simply too good to let slip through the Maple Leafs’ collective fingers.

The Finnish-born Kapanen was the Pittsburgh Penguin’s first-round pick (No. 22) in 2014. Kapanen, as a prospect, received attention both because of his skill and because he’s a second-generation NHL player. Father Sami played 831 NHL games, scoring 189 goals and 458 points. Kapanen comes from good NHL stock. When his father played for the Philadelphia Flyers, Kasperi spent tons of time hanging around the team. As a result, he knows firsthand how to survive and prosper in the NHL. He’s been getting ready for being an NHL player his entire life. 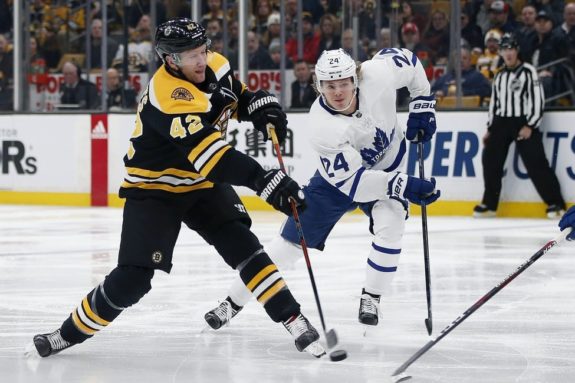 His hockey demeanor is good, and his talent is obvious. Maple Leafs president Brendan Shanaha noted very early, “He’s a talented guy; a top-six forward, we are hoping. I think he adds to another group of players that we have in our stable, that with a lot of work and a lot of patience and some development, we hope he can become a very productive Leaf at some point.”

A scout for The Hockey News projected that Kapanen is a “smart player who distributes the puck well and reads off his teammates. He has great on-ice awareness and a professional demeanor. He is a very talented offensive player who moves well on the ice, and when afforded too much time and space, he is a very lethal finisher.”

Related: Is It Time for the Maple Leafs to Trade Kadri?

The same scout noted that, at his peak, Kapanen could be a top-six goal-scoring winger. He has speed, hands, solid hockey sense and he’s a hard worker. His time recently with the Maple Leafs supports these early prognostications.

Kapanen came to the Maple Leafs in the Phil Kessel trade prior to the 2015-16 season. After arriving from the Penguins, Kapanen’s playing time with the Maple Leafs has been limited because of his youth and the team’s depth on the wing.

This season, circumstances changed. With the departure of James van Riemsdyk and the late-signing of William Nylander, Maple Leaf fans have had a chance to see what Kapanen might accomplish if he were playing full-time as a top-six forward. What makes him attractive is that he can deliver on offense, but he’s also solid on defense and the penalty kill. As well, he plays with an edge, which is uncommon on this season’s team.

Kapanen has shown he is ultimately flexible, and much more than just a one-way player. His point-a-game production during his last two AHL seasons showed what he could do on offense in the minors. In this season’s full-time work with the big club, he hasn’t slowed down. 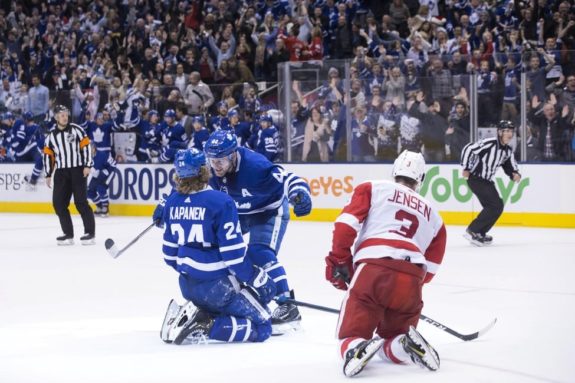 That he thinks to play defense is a blessing on this roster, where the team’s best forwards are offensive-minded. Kapanen is still young at 22 years old but the word is that, if he fails to find a full-time role with the Maple Leafs, he’s soon on his way out of Toronto.

This season’s scoring numbers represent a breakout season for Kapanen. The numbers are even more impressive because he scores without much power-play time. The good news is that he has become a valuable player for the Maple Leafs. The bad news is that he’s due to become an RFA after this season.

In the shadow of the Nylander signing, and with new contracts for Mitch Marner and Auston Matthews on the horizon, the Maple Leafs might have to do something. But, does something mean trading Kapanen? I hope it doesn’t, especially for a defenseman. My experience suggests that a serviceable (older, cheaper, steady, isn’t exciting but doesn’t make a ton of mistakes) defensive defenseman is far easier to sign than a creative, two-way winger with a potential to put up big numbers.

My hope is that the Maple Leafs don’t keep Jake Gardiner. That’s not because I don’t think he’s a good player. I do. I just think he’s worn out his welcome in Toronto, a fact I’m sorry about, but that is what it is. For me, signing Kapanen to a new contract after this season might be difficult, but I think it would prove rewarding in the future.

Kapanen might still be young, but he has huge upside. He doesn’t complain about extended fourth-line shifts. That gives him cache with the coach and the team. He has shown up as a good playoff performer, and he has done well in penalty-killing minutes.

Related: Can the Maple Leafs New ‘3M Line’ Carry Them?

Kapanen is confident, with good reason. He can contribute on offense by putting the puck in the net, and is value-added as a defensive forward. I hope the Maple Leafs make it a commitment to keep him in the Blue and White.

Top 3 Islanders that Need to Produce in the 2nd Half

Avalanche Streak to the All-Star Break