When the Dallas Stars signed Michael Ryder to a two-year deal, it seemed like an attempt by General Manager Joe Nieuwendyk to patch obvious holes the team has had in depth over the past two seasons. Ryder’s productivity has languished over the past two seasons, and it appeared his offensive output was on a downward trend. However, Ryder, 31, has shown he still has the ability to find opportune spots on the ice, score timely goals, and rip blistering wristers. So far, his play has been a welcome addition to the Stars, as he leads the team in goals at the midpoint of the season.

Ryder was originally drafted 216th overall in the 1998 NHL draft by the Montreal Canadians. He played his initial four seasons with the Canadians–his first coming in the 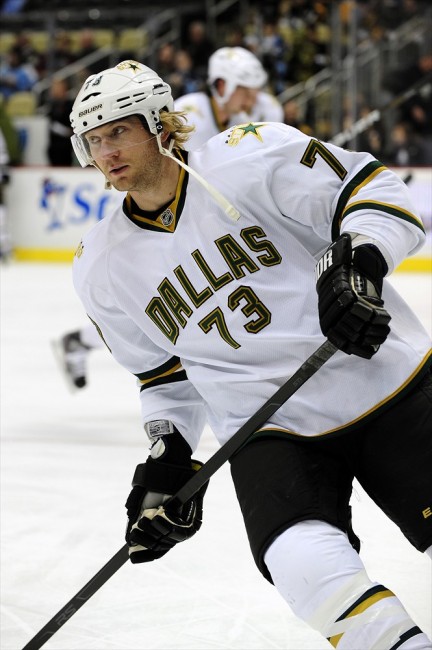 2003-2004 season, in which he recorded 25 goals and 38 assists for 63 points (his single-season career record). Ryder followed that up by netting back-to-back 30-goal seasons for the Canadians. Under the new coaching direction of Guy Carbonneau during the 2007-2008 season, Ryder dealt with less ice time and fewer opportunities, which culminated in a dismal 14 goals and 17 assists in 70 games. During the following offseason, the Boston Bruins made a hard push for Ryder and signed him to a three-year deal. His first year in a Bruins uniform was a rebound season for Ryder, as he nearly eclipsed the 30-goal plateau, netting 27 goals and 26 assists in a season that saw the Bruins record 116 points. Ryder’s productivity faded in his final two years in Boston, as he scored 18 goals in each of his final two years as a Bruin. It’s arguable that under the Bruins defense-first system, Ryder’s offensive skill was hindered. This may be true, but it also shows his ability to adapt to different schemes. Ryder did prove effective in the Bruins Stanley Cup run in last season’s playoffs, as he scored eight goals, had nine assists, and registered a +/- rating of +8 in 25 games–certainly another reason why the Stars pursued Ryder in free agency.

Throughout his career, Ryder has been plagued by streaky play, where he racks up points in a short span and then wallows over the course of two or three weeks–this season has been no different. In the Stars’ first game in January, Ryder netted two goals and recorded one assist. Since that time, Ryder has no goals and three assists in six games. Nevertheless, Ryder has overachieved thus far as a Dallas Star. Barely at the halfway point in the season, Ryder, with 17 goals, 15 assists, and a +9 rating in 44 games, is on pace to meet his career mark in goals and possibly surpass it. Also, he has shown himself to be malleable to Head Coach Glen Gulutzan’s system. Although Ryder has seen action with Loui Erikkson, Steve Ott, and Jamie Benn, recent injuries have caused Gulutzan to roll his lines, and Ryder was paired with Eric Nystrom and Vernon Fiddler in the team’s most recent game against the St. Louis Blues.

Ryder has been a stalwart member of the powerplay unit, and his playoff experience should bode well for a team that has young players with scant playoff games under their belts. Ryder currently leads the Stars in goals and is third on the team in points. Whether or not he extends his stay with the Stars beyond the two-year deal, the Stars have found another offensive threat, and Ryder has found his step once again in the NHL. Look for Ryder, with ample playoff experience, to be a key member of the roster as the Stars near a playoff push later in the season.