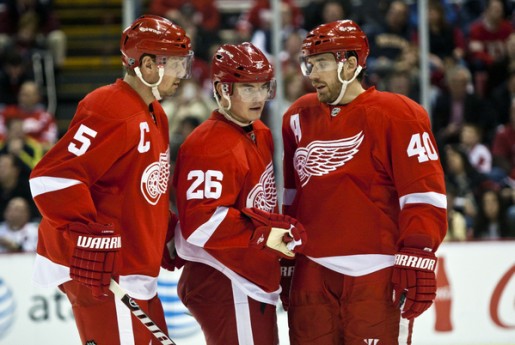 Nicklas Lidstrom, Jiri Hudler, Henrik Zetterberg and the rest of the Detroit Red Wings are up to their usual standards in the NHL thus far. Hudler is on pace to put up bigger numbers than his disappointing 2010-11 season. (Icon SMI)

The Detroit Red Wings have hit the 41 game mark in their season and start the second half of the season Jan. 10 when they face off with the New York Islanders on Long Island. Let’s take a look at some the stats, the surprises, the disappointments and what to expect in the second half.

Biggest Surprise: After spending a season with Dynamo Moscow of the KHL, Jiri Hudler was a pretty big letdown in the Motor City, putting up the second-lowest numbers of his career (G: 10, A: 27, PTS: 37). This season, barring a catastrophic drop in production, Hudler will surpass these numbers. With numbers of 12-15-27 at the midway mark of the season, Hudler should hit the 50-point mark this season, coming close to his career-high total of 57 PTS. Also, at a +/- rating of 4, he’ s playing better defensively than last season’s rating of -7. A final statistic that is interesting to look with Hudler is his 20.3 shooting percentage, which puts him second on the team behind Valtteri Filppula.

Biggest Disappointment: After signing this off-season, Mike Commodore has been fighting injury all season, which has limited him to just 10 games. In those ten games, he’s got one assist and has a +/- rating of 4. Hopefully he can the injury bug and solidify an already solid blueline. If not, there’s definitely other defencemen in line that can take the spot.

The Constant: It’s hard to point out one constant with the Wings, who have been the model of consistency in the NHL for the past 15-20 years. I mean, it could be Pavel Datsyuk, who leads the team once again with 43 PTS, or Jimmy Howard, who has a record of 24-10-1. Being the traditional hockey fan I am, my nod for the constant in the Wings lineup is Nicklas Lidstrom. Of course, everyone is going to go through his play with a fine-tooth comb but he’s as sturdy as ever, despite the dip in his offensive numbers. At the end of the year, he’ll likely hit the 40-50 PTS mark on the season but he’s at a +/- rating of 18 already, so I seriously he’ll finish a minus like he did last season.

Final Grade: My grade given to the Red Wings at midway point of the season is an overall A. They have been the hallmark of consistency and have thus far continued this trend. They should make the playoffs and will be in a dog fight with St. Louis and Chicago to win the Central Division. The only glaring weakness for the Wings is their road record (11-12-0), which is poor when put up next to their stellar record at the Joe (15-2-1). If they clear up this weakness, looks for the Wings to make some noise in the playoffs.