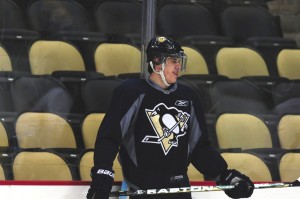 The NHL just passed its midway point, and a number of candidates have emerged for each of the major NHL awards. It should be an interesting second half, as teams try to battle for playoff spots and players establish themselves as the best in the league.

At this point, it is difficult to say who the award winners will be, but there are a number of contenders. Here’s a quick glance:

First-half MVP: Pittsburgh has suffered through injury after injury (Sidney Crosby, Kris Letang, Jordan Staal), yet the Penguins still find themselves in 6th place in the East, just 4 points behind Philadelphia and 8 behind the conference (and Atlantic Division) leading New York Rangers. How has this happened? One big reason is the play of Evgeni Malkin. The 25-year-old Malkin has been incredible for the Pens, leading the league with 54 points on 24 goals and 30 assists. Malkin has pretty much carried the Penguins on his back thus far. Other contenders: Claude Giroux, Patrice Bergeron, Jonathan Toews, Brad Richards, Henrik and Daniel Sedin, Pavel Datsyuk

Top defenseman: Erik Karlsson was Ottawa’s lone representative at last year’s all-star game, and many believed it was the beginning of great things for the 21-year-old Swede. He finished last season with 13-32-45 totals, and already has surpassed the assist total this year with 38 (second in the NHL). In addition, he has a plus-8 rating and leads the young Senators as they make a push for the playoffs. Other contenders: Zdeno Chara, Shea Webber, Brian Campbell, Nicklas Lidstrom,Dan Boyle, Duncan Keith

Top goalie: Not that long ago, Detroit fans and management were questioning whether Jimmy Howard was capable of being a No. 1 goalie in the NHL. These days, however, you would be hard-pressed to find a Detroit fan who does not believe Howard is an elite NHL goalie. Howard has been a workhorse for the Red Wings, posting a 28-10-1 record with a 1.98 goals against average and a .926 save

Jimmy Howard has led the Reed Wings to the top of the Central Division standings. (Icon SMI) (Icon SMI)

Top defensive forward: For the past couple of seasons, I have been lauding Patrice Bergeron for the Selke Trophy. This might finally be the year he wins it. The 26-year-old Bergeron is a seasoned veteran, as he is in his eighth NHL campaign. He is Boston’s heart-and-soul, is the team’s best two-way player, and is one of the most reliable faceoff men in the NHL. Most recent Selke winners (Daystuk, Ryan Kesler) have also pout some impressive offensive numbers, and Bergeron is doing just that with 14-25-39 totals and a plus-28 rating, Other contenders: Toews, Datsyuk, Ryan O’Reilly, Ryan Callahan, Brooks Laich

Top coach: Despite the rash of firings, this category has several good contenders. The winner at the halfway point, however, has to be Kevin Dineen, who has the Florida Panthers on top of the Southeast Division. The Panthers have been among the worst NHL franchises over the past few years, but have been at the top of the Southeast standings for months. The first-year coach has earned the respect of his team, and has the Panthers in the hunt for the Stanley Cup. Other contenders: John Tortorella, Ken Hitchcock, Claude Julien, Paul MacLean, Dan Bylsma

Biggest surprise (team): No one was picking the Florida Panthers to be in the playoff hunt, never mind leading the Southeast Division in late January.  The Panthers have a lot of depth up front (Kris Versteeg, Stephen Weiss, Tomas Fleischman), a Norris Trophy candidate in Campbell, two other excellent defenseman (Dimtry Kulikov and Jason Garrison) and solid goaltending (Jose Theodore and Scott Clemmensen). Other contenders: Ottawa Senators, St. Louis Blues

Biggest surprise (player): Like the Panthers, no one expected much when St. Louis signed Brian Elliott to back-up Jaroslav Halak. Elliott had shown flashes of brilliance in his career (mainly with Ottawa), but no one could have forecasted what Elliott has done this season for the Blues. He has posted a 15-5 record with a 1.68 GAA and .937 save percentage (second only to Tuukka Rask in both categories). Other contenders: Jose Theodore, Benoit Pouliot, Joffrey Lupul

Biggest disappointment (team): Many people believed Anaheim might make a run at the Stanley Cup. Instead, the Ducks have just 16 wins and 39 points, and are 13 points out of a playoff spot. They are also talking about trading guys like Bobby Ryan and Ryan Getzlaf.

Biggest disappointment (player): Coming off an MVP season a year ago with 50 goals and 48 assists, Corey Perry has just 22 goals and 17 assists as the Ducks struggle.

Steve Kendall has been writing about hockey at all levels since 1990. In addition to The Hockey Writers, his work has appeared in New England Hockey Journal, the Boston Herald and the Worcester Telegram & Gazette. You can follow him on twitter @skendallhockey