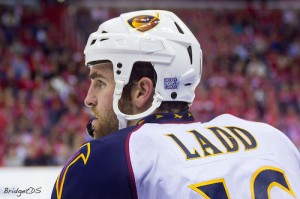 From their expansion year in 1999 until now, the Atlanta Thrashers have employed seven players who wore the C on their jersey. Only Ilya Kovalchuk, currently of the New Jersey Devils is still playing. Kelly Buchberger, Steve Staios, Ray Ferraro, Shawn Mceachern, Scott Mellanby and Bobby Holik join Kovalchuk as the only members to ever captain the Thrasher’s.

Thrasher Nation, it’s time to welcome the 8th player in franchise history to wear the C on a Thrasher sweater. Andrew Ladd, the team leader in points with 18, the hardest worker during a 60 minute hockey game for your Thrashers, a 2 time Stanley Cup Champion with the Carolina Hurricanes and Chicago Blackhawks, is your newest leader.

When General Manager Rick Dudley announced the acquisition of Andrew Ladd from the Chicago Blackhawks, it was a deal that followed a much bigger deal with General Manager Stan Bowman and the Blackhawks. Three Stanley Cup champions in Ben Eager, Dustin Byfuglien and Brent Sopel were on their way to Atlanta just a week prior to the Ladd deal. What Thrashers fans understood at the time, was that Atlanta had added another solid winger to their lineup in Andrew Ladd, what they are beginning to realize now, is the true investment Rick Dudley made on July 1st.

Driving hard to the net, making life miserable for the opposition along the wall and creating plays and space for his linemates, are several key components to Andrew Ladd’s game. His leadership qualities, hard work and dedication to the game of hockey however, is the reason Ladd is the 8th Captain in Atlanta’s franchise history.

Playing with true veteran leaders in Carolina (Rod Brind’Amour and Ray Whitney), Ladd was able to grasp the true understanding of what needs to be done on a daily basis in the NHL to be successful.

Ladd has brought those valuable leadership qualities to Atlanta and is an ideal player for the future of this franchise to follow.  Players such as Evander Kane, Patrice Cormier, Alexander Burmistrov, Zach Bogosian, Niclas Berfors and Bryan Little,  are able to witness exactly how things need to be on and off the ice in terms of professionalism and production.

Dustin Byfuglien and Tobias Enstrom will wear the A’s for Atlanta this season. Byfuglien’s Stanley Cup experience, ability to play at both ends of the rink, and leadership qualities will pay dividends for this hockey club. Enstrom, drafted 239th overall in the 2003 National Hockey League entry draft, has been a big part of the blueline in Atlanta, putting up 135 points in 265 games played in his Atlanta career.

This much we know, Andrew Ladd wearing the C in Atlanta is one huge step forward. New leadership was identified as a must by General Manager Rick Dudley. It’s in place now and is ideal for the development of a bright future.